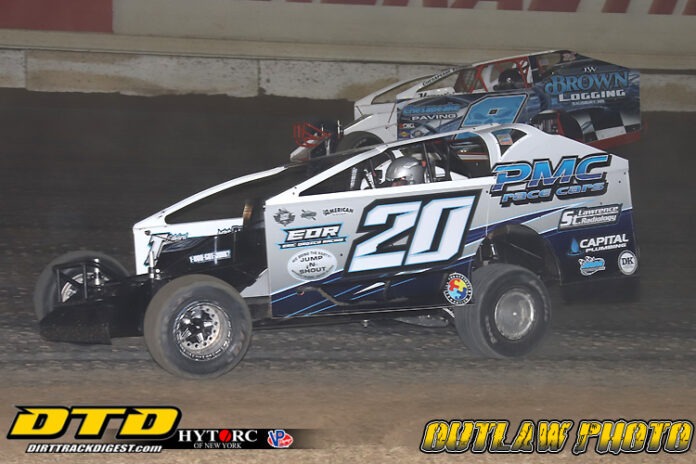 David Schilling put on one hell of a show with the “Weekend Warrior” powerplant on what proved to be the final night for this year’s Sunshine Swing for STSS Modifieds.

Watching Schilling running the low line early in the race was quite impressive as he simply blew by a number of highly competitive drivers. He progressed through the field, and with three laps to go, appeared to have a top five spot firmly in his grasp. However, it was not to be.

He won the consi, started 21st and finished a respectable sixth for his best finish of the week.

He said, “I felt good out there. We adjusted the steering.  In the consi I knew I had a good car. It felt good in the feature and gained momentum. I went wide early and went to the middle a couple of times. I got up to fourth and wondered ‘how the hell did I get here?’ With just a couple laps to go I restarted and things went the wrong way. My choice of line was wrong the last three laps and Billy Pauch Jr. and Friesen got by me.”

Continuing he said, “The track was smooth and the motor allowed me to put what I wanted to into the throttle. It was responsive and gave me as much power as I wanted. The car was handling perfectly and the motor was just great.”

Schilling is one of the few drivers running what he has.

Under the hood is a Wegner “Weekend Warrior” engine as he and Addison Bowman are the lone two running one. He runs a PMC chassis and Jams Shocks.

He said, “PMC is out of Schodak and does some cars for Lebanon Valley. He does cars for L.J. Lombardo and Bobby Haeckel and has been around a long time. In fact, Randy Ross used his chassis for Matt Sheppard and Billy Decker. PMC seems to be building more car.”

Continuing he explained, “I use Jams Shocks which are built by Joe Matthews out of Pittsfield, Massachusetts. He also does them for Marc Johnson and Demetrios Drellos.

And then there is the engine..

Talking about and engine that Brett Deyo hopes will expand the opportunities for more drivers to move up and compete with the Short Track Super Series, Schilling said, “It is a little finicky in the way the water set up is in the car, but I’ve dotted my “i’s’ and crossed my ‘t’s’ and it is perfect. The valve train is much less expansive as the Wegner 427 engine is $22,500 ready to go. It’s simple and is a bit different in hooking things up, but there are lots of parts available and they are less expensive than other motors.  Parts for it are readily available on the open market. They are built to make decent horsepower cheap.”

As the season opened David said, “I really needed a motor for this year and this deal really makes sense for me. We got off the ground running.”

The next test said Schilling is coming soon as he said, “It will be the first time the motor has been in competition at Cherokee. That track is intense on motors and would be nice to show it off. In the smooth and slick it has worked well. South Carolina clay always gives you a bite and Cherokee can be hard on motors.”

Schilling appears to be one of the up and coming drivers in Modified racing.

Looking back at his career, he said, “I did some 358 racing at Lebanon Valley, but then went to Sportsman at the Valley and Albany-Saratoga. I started running Mods at Fonda in ‘18, did a little bit in ‘19 and did what I could do in the Covid year. Last year were did 48 races.”

Despite living just a mile from Lebanon Valley Speedway he won’t be seeing any action there. This season, he noted, “We really don’t plan on running weekly, but will be at Deyo Elite and North STSS races that we can and the Thruway Series at Fonda and Utica-Rome.”

Schilling definitely has something to build upon after a decent start in Florida.