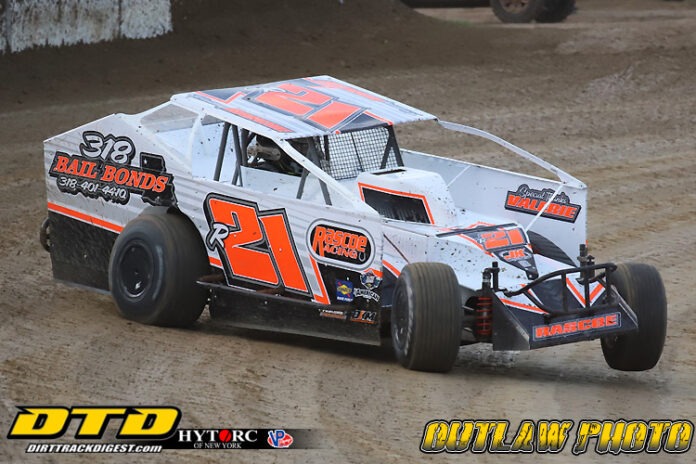 Tommy Rascoe was the sole invader from the Short Track Super Series Cajun Region to compete last week in the Sunshine Swing at the All-Tech Raceway.

“I like ‘em a lot, you can feel it in the race car,” stated Rasco of the Northeast Modifieds.  “I am so used to driving UMP and IMCA cars, but sitting in the middle of a Modified with that power under you is like something I’ve never known.”

Rascoe noted, “My 364 was bought for me by my fiance Valerie who really believes in my racing.”

Rascoe is one of a new breed of race car drivers in the South.

Brett Deyo has put together the Cajun Series which has helped organize the division.

Last year when the Cajun Swing multi-day finale took place there was well over 20 Southern based cars to go along with the Northern invaders.

Rascoe said, “The class is growing and I think it is really ready to take off as many guys are buying cars.”

Tommy has made the transition quite well as he said, “I had a feature win last year and eight top fives. We also were able to finish second in points in the series.”

He noted that fans would enjoy the red clay surfaces and racing on the tracks where the Cajun Series runs.

Looking at the tracks he noted, “Ark-La-Tex, The Rev, Boothill and Chatham are all great tracks. I have run a lot of laps at Boothill and the track has a lot of bite. I’ve also raced a lot of laps a Chatham and had an eighth place one night in the Cajun Swing and the next night was seventh or eighth and burned a piston.”

So why did he make the trek to Florida?

“I was here last year at Bubba with a Sportsman and decided I wanted to be here this year with the Modified. It is tricky and tough to learn. I am learning so much running with drivers like this. This is a learning trip. This surface is really tricky. I like a track with a lot of bite and I am not really good on slick tracks and this is a slick track.”

He has received some assistance in his quest as he explained, “Mike Mahaney has really helped me. Mike Walton also helps me out. They guys are making a lot of suggestions and it has helped so much.”

Tommy, like all racers could use some help, as he said, “I have one sponsor, 318 Bail Bond, and a guy named Stumpy who is camping out from New York and he gave me a couple of hundred dollars this weekend for fuel.”