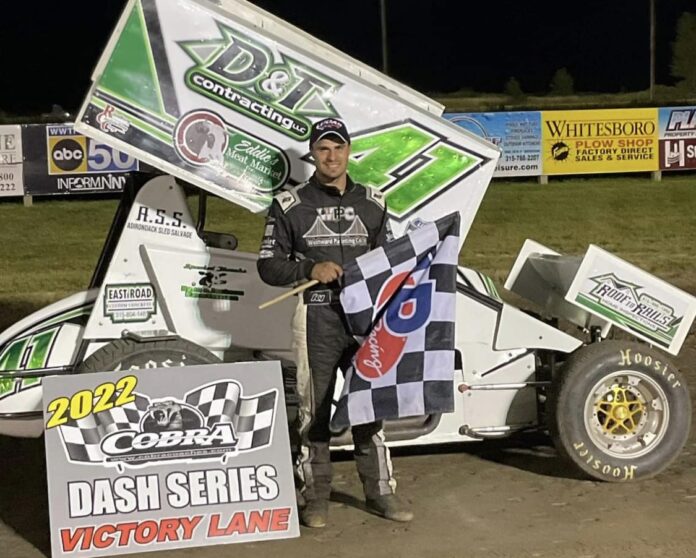 WEEDSPORT NY-Patriot Sprint driver Dalton Rombough had one of those weekends he will never forget.

On Sunday night he towed his car to the Weedsport Speedway for night two of the Empire State Challenge.

He had never raced against the World of Outlaws before and noted, “We did run against Dylan Westbook at Outlaw and he’s a pretty good driver, but this is the first time with the Outlaws.”

Standing alongside his trailer as the pits emptied on Sunday night the final car to qualify from the last chance race was loaded and Rombough said, “It ws exciting. I was just here to learn and I definitely need to get better on a slick track. It was a good night and it was fun running against those guys.”

Rombough had timed in 27 out of 29 and finished sixth in the last chance race while capping off hs night running 28 of the 30 laps featured event.

On Friday night at Outlaw Speedway in the Summer Nationals he finished tenth after timing in second quick.

However, he din’t race Saturday night.

Asked why he skipped the first night of the Outlaw at Weedsport, the young lady alongside him said, “He got married yesterday!”

Breanne and Matt celebrated Saturday at the Tug Hill Vineyards in Lowville.

Asked if this was the honeymoon, Breanne smiled and Dalton was quick to say, “We’ll do that over the winter.”

Congratulations to the newlyweds and definitely a good reason to miss night one of the Empire State Challenge.

It was a weekend of first for Dalton Rombough as he ran his first ever WoO Sprint car main and got married.