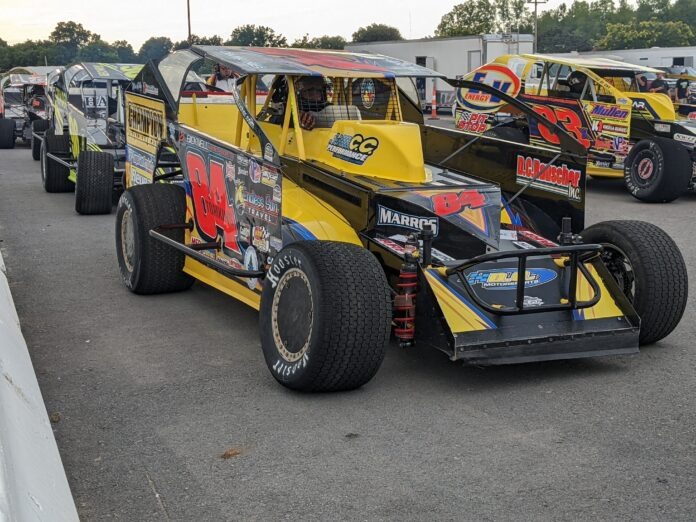 The Super Bowl of big-block Modified racing is just around the corner and it is hard to imagine Super DIRT Week without the presence of Gary Tomkins.

Mr. DIRT 2004 remains relevant in the world of Modified racing.

He’s been relatively absent from racing in the 2022 season, but on Monday night there he was in the Dave Rauscher owned No. 84 preparing for the SummerFAST.

Gary said, “We plan on running tonight and see how things go and then run again on Thursday at Land of Legend if everything is okay.”

Tomkins talked about his involvement in racing, explaining, “I work on Dave’s stuff all year and we got the 48 together and decided to run the 84 for a few races. This is only the second race of the year for me.”

Continuing he said, “We need to keep Dave in a car and keep him going.”

Despite early race contact with Darren Smith, Gary finished in the fifth and final qualifying spot in the third heat.

Starting 18th in the 27 car grid, he dropped out on the ninth lap, simply saying, “The car just wasn’t fast enough so I pulled in.”

Gary Tomkins is an extremely popular driver and started his racing career back in 1981 and raced in a Modified for a total of 31 years.

His record is elite with 18 total Super DIRTcar Series wins, 41 feature victories at the Land of Legends, 10 on a weekly Brewerton schedule, a dozen at Can-Am and five at Weedsport.

He earned the Mr. DIRT crown in ‘04 in the legendary Beechy #1 which was the Pillsbury car.

Recently, he was inducted in the Wall of Honor at the Canandaigua track and said, “It means quite a bit and it is an honor to be recognized for having such a good record there.”

Tomkins is looking ahead as he said “This car is the body from Oswego. We ran Dave’s body at the Land of Legends earlier this season in our only other time out, but we are planning to be at Oswego for Super DIRT Week if things fall into place.”

It’s always a positive to see Gary Tomkins the pits at any Modified event.

He is one of the Dirt legends in racing who still is capable of competing at a high level.

Today he might be maintaining Dave Rauscher’s primary equipment, but that also allows him from time to time to get back in behind the wheel of a big-block Modified where he is still a capable competitor.