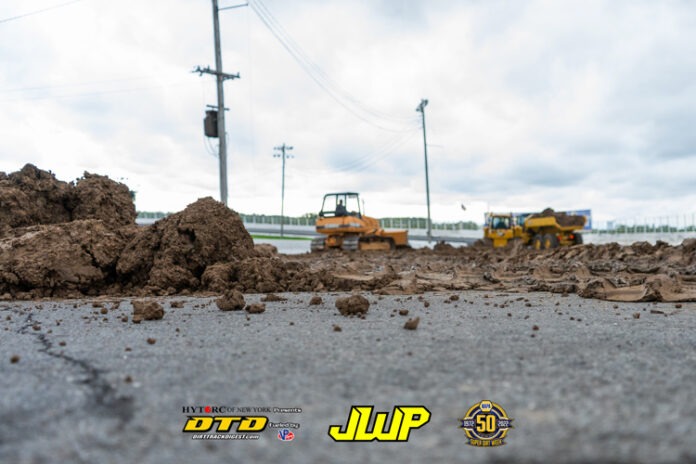 OSWEGO, NY – The 50th Super DIRT Week officially began at the Oswego Speedway on Wednesday morning, September 14th as a crew of racing oriented folks gathered to commence the construction of this year’s surface. 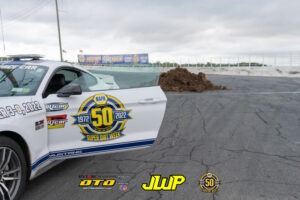 Jeremie Corcoran, well known for his track preparation, was hired by John Wight to get the track ready for the 50th Anniversary edition as Wight is contracted by World Racing Group to complete the task of getting the clay on and in racing order for Super DIRT Week.

Before the first load was even brought into the track, Jeremie spoke exclusively with DTD and explained how the process would be.

He said, “We will just start dumping clay and then we will doze it, spread it out, disk it, roll it, grade it, disk it, roll it,  and grade it.  We will start in turn three and work our way around and finish up hopefully by tomorrow night or Friday and we should have the track ready to go.”

A year ago he got called in late to attempt to solve some major issues, but it was a difficult challenge from the very beginning. 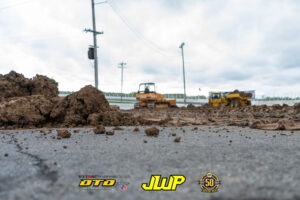 He explained, “I talked with John (Wight) last year about doing this and I’d rather start from the get go. Last year it was laid down way too thick and you couldn’t get the moisture out. You have to get the moisture out of it or otherwise you will have the roll you had last year. As it was on Sunday, Brian Carter and I went out there and it was still wet to the asphalt. I had pushed a lot of the clay to the top.”

Continuing Jeremie explained, “People said it bonded to the asphalt, but you don’t want it bonds to the asphalt. You go five or six inches and it will stay. It rained so much. I think I came in four or five days before the race and there was moisture in it. It was misting like it is right now for four days and it put us behind.”

As far as the thickness of the clay covering the Steel Palace, Corcoran said, “It will be eight inches thick. We will put it down all the way. I’ll spread it out and then we have a GPS dozer here that will fine tune it. We will try that system here.  It is something new to me and we will see how it goes, but I think it will work out good.”

It is anticipated there will be a practice session before SDW as he explained, “We are not really sure when that will be. I want it perfect this year as it is the 50th year and John wants it perfect and so does everybody.” 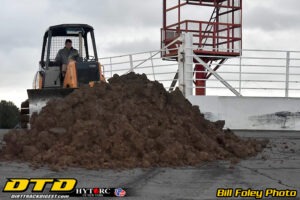 At approximately 7 a.m. Tim Sears Jr. hiked up the clay pile, boarded his equipment, dug up the first pile of clay and placed it in the back of the dump truck.

It wasn’t three minutes later before the first clay began to cover the asphalt on the Steel Palace.

Jeremie began to bulldoze the clay and other equipment quickly made its way up the third turn driveway to commence a project that they hope will move along smoothly.

Meanwhile, Larry Wight, behind the wheel of a second bulldozer, set up a GPS program which will tell the teams the depth, evenness and smoothness of the clay as they place it down. 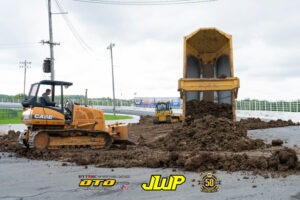 Wight noted, “We are looking at four days that look pretty good for doing this.”

Jeff Hachmann, the point person for the World Racing Group, takes up residency in the Port City this time of year.

Talking to DTD, he said, “I love October, I love Super DIRT Week and it’s 50th Anniversary so it’s exciting to put together all the extra things we are doing this year just to make it extra special for everyone. Not only for the fans, but for all of us.”

As the lead for the biggest event in DIRTcar racing, Hachmann talked about the pressure he faces, saying, “Oh yeah, lots of pressure. It’s a team effort, but if something goes wrong I would like to believe I am choreographing it so I have to make sure all of the pieces come together.” 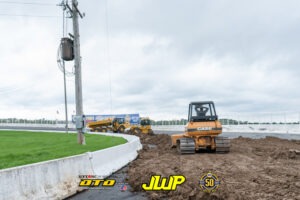 He has been involved in Super DIRT Week since the inception of the racing at Oswego and talking about changes over that time, Jeff said, “It’s much more efficient now. Still dealing with the same thing as Mother Nature throws us curve balls. We’ve had a turnover in staff and World Racing Group is doing a ton of events now and some of the staff that has helped us in past years are now taking care of other events.”

However, he continued by saying, “The City has come to support us. The track supports us and all these processes that we’ve learned over the past couple of years have now come to fruition and made us more efficient.”

Jeff appreciates Oswego, “To know we have the support of everyone, to shut down streets, to build extra campgrounds, to team up with a school to have our command center, state police, city police, fire is so important. I feel like we are transforming a city and something Oswego looks forward to. The mayor is only a text message away and the county health department has become a huge supporter.”

So, 2022 Super DIRT Week is just around the corner.

The effort is simply massive and the behind the scenes efforts are critical in making the 50th Anniversary edition a success.

John Wight, Jeremie Corcoran, Tim Sears Jr., Tim Harris and Larry Wight along with the rest of the crew will do the best they can to provide a solid racing surface for this year’s event while Jeff Hachmann, Nick Graziano (Public Relations) and the World Racing Group team will provide numerous special events to make this year even bigger, better and more memorable.