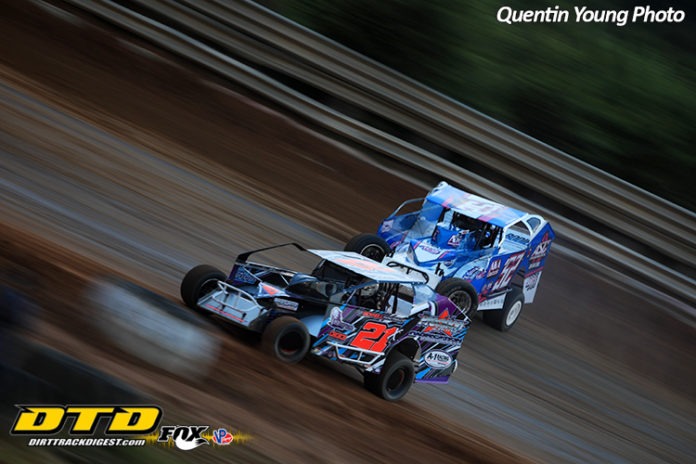 Last night, many drivers took their first laps around Chatham Speedway in preparation for Friday’s 32 lap and Saturday’s 75 lap feature events, with consistent, good reviews of the speedway. In terms of size, the track is comparable to somewhere along the lines of Five Mile Point, measuring .246 around the inside racing groove and .305 around the outside lane. The relatively symmetrical shape resembles that of tracks such as Albany-Saratoga, but with some progressive banking.

Jessica Friesen clocked the fastest lap of the evening around Chatham, turning a 15.3 around the central Louisiana oval. After a rough outing at Tri-County, Mrs. Friesen looks strong entering this weekend.

“It’s definitely a different track,” stated Friesen. “It kind of reminds me of Five Mile Point with the way the surface is, but I’ve only raced there once. It’s also got a little bit of Fulton in there as well.”

Larry Wight shook down two cars during practice night, both a Bicknell and Teo, with the majority of laps being turned in the new Teo Pro Car.


“It’s pretty good,” said Wight. “It’s got a lot of sand in the surface, but nowhere near as dusty as some tracks around us with that type of surface. I think we’ll have a good show this weekend.”

“This is awesome for our northeastern Modifieds, hopefully this is a building block for the future,” Friesen said. “This is a fun little racetrack, I’m excited to get on it tomorrow and get racing with people. There’s gonna be some slide jobs tomorrow, they said they’re going to disc it up and tear it up tonight.”

Matt Sheppard has shown his typical speed so far in 2020, but awful luck has nullified multiple chances at reaching victory lane. He gets two shots at changing that this weekend.

“It’s a racy track, it’s got a real nice surface on it,” Sheppard noted. “You’ll be able to move around tomorrow, I’m ready to go race some people on it.”

All the racing action can be purchased on dirttrackdigest.tv, with single day and two day Pay-Per-View packages available for $44.99.  Single day passes are also available.