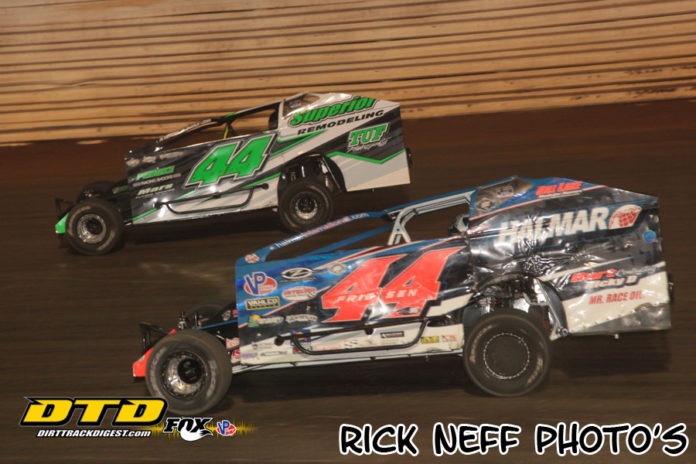 PORT ROYAL, PA –  Following a tough week of racing in New York, Stewart Friesen looked to turn things around at Port Royal Speedway’s Speed Showcase weekend. While the end result of a runner-up finish in the 200-lap finale is a great showing, leading up to the race was anything but smooth. Friesen finished seventh in Thursday’s 40-lap event with a battered machine, injured on all four corners. On Friday, Friesen lost his primary motor in his heat, relegating him to the 39th starting spot on Saturday.

“Fortunately, I’ve ran a bunch of these long races, and this wasn’t my first experience starting way back there,” Friesen said. “I knew if we had a good enough car and track, we could get there just fine, but I was definitely worried about the track laying rubber and locking down. It didn’t, it was abrasive and wore tires like rubber can get, but you could race wall-to-wall on it. The track was the key to being able to recover from that starting spot, I found a great line up on the fence in one and two, got to the front pretty quick, and allowed us to work our plan.”

Friesen’s “plan” all revolved around the lap 100 break. While all other frontrunners planned on taking tires at the halfway point, third-place Friesen undercut their strategy and pitted on lap 88. Initially, this put Friesen deep in the field, but after the halfway break, Friesen cycled to the front and was a good bit ahead of the cars he was previously battling before his pit stop.

“That strategy is something we planned on doing, but the cautions need to fall just right,” noted Friesen. “Once we made our stop, we sort of pulled a Matt Hirschman (asphalt Modified driver) move and rode around at the back, saving our stuff until everyone else came in. Once we got clean air, I thought we were home free, but we were starting to skate the right rear tire and I was starting to worry about others like Anthony Perrego and Mat. My crew guy Tommy was signaling to me from the infield to head to the bottom, and at that point I knew I was in some trouble.”

The lap 182 restart was the turning point of the event, with Friesen opting for the bottom as opposed to the top like restarts prior. The reasoning was to get Williamson off of his preferred lane on the bottom, but the restart did not go to Friesen’s plan.

“I changed lanes on that restart, went to the bottom and just slid right across the race track,” stated Friesen. “I knew I was toast right there. I hadn’t ran the bottom much at all and was trying to keep myself as straight as I could and it didn’t stick. Mat was able to cross me over when I slid to the top, and that was about it. I didn’t have the motor to run the bottom, I needed to keep it wound up on the cushion since I didn’t have the pull to get off the bottom and not lose all my momentum. Mat was able to shut the car down and still get the launch off the corner, I tried but couldn’t do it.”

Friesen didn’t run the 200-lap event with his preferred package. With his preferred source of horsepower going up in smoke during his heat, Friesen had to switch to a smaller engine, and in turn, felt he could not run the lanes needed to keep Williamson at bay. Friesen intended on running a bigger small block than a 360, but was left with no other option for the big show.

“We hurt our best motor on Friday, so that definitely put a damper on things,” said Friesen. “We put our 360 in for tonight, the motor we’ve ran at Fonda for the past four years. It has definitely been a heck of a workhorse for us, but I just don’t think it was the best option for this track with the much longer straights than Fonda. It’ll be headed back to Billy The Kid for some work when we get home, we definitely twisted it hard tonight.”