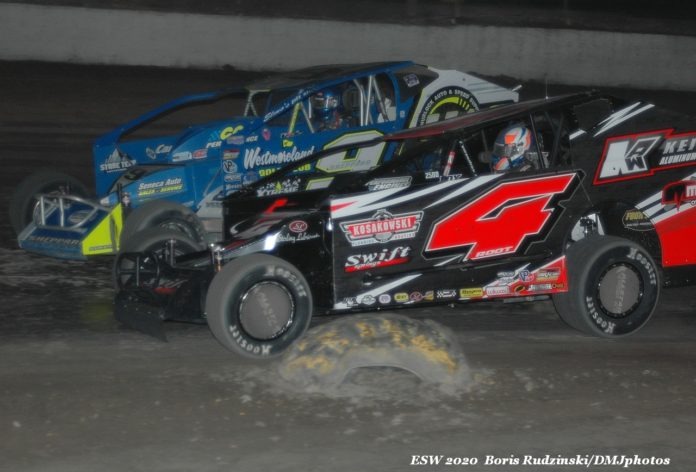 Kevin Root has emerged as a dominant force in Central New York’s Sportsman division over the past few seasons, picking off win after win and occasional championships. Late this season, Root’s racing schedule went from busy to busier, making the leap to the small and big-block Modified divisions aboard the Keizer Aluminum Wheels No. 4* ride, a car previously piloted by drivers such as Brett Hearn, Tim McCreadie, Michael Storms, and more. While running Vinny Salerno’s mount in the Modifieds, Root kept his personal Sportsman on track, leading to a rare opportunity to race in three divisions during Eastern States Weekend. While it may seem Root suddenly dropped into the Salerno seat, the pairing was a long time coming.

“I’ve been friends with Salerno for a long time, I used to help him out when McCreadie drove for him,” Root said. “My first Sportsman car in 2015 was one of his old cars with my number slapped on it. He’s helped me out a lot my whole time in a race car, and the opportunity came up about a month ago to hop in his cars in the Modifieds. Vinny was out of owning cars for a while, but jumped back into it relatively recently, and needed a driver starting around August. It has certainly been a change, but I was super excited to get the call up.”

As mentioned, Root competed in the Sportsman, 358-Modified, and big-block Modified divisions this weekend Orange County Fair Speedway. As expected, this led to a pair of long days where Root rarely got to sit down other than while driving. In all, Root completed 325 laps of feature competition on Saturday – 200 in the big-block, 75 in the small-block, and 50 in the Sportsman.

“Oh, it was a hectic weekend,” Root noted. “It was a bit of a cluster the whole time, but the first day was messy trying to figure out how to manage the cars and be where we needed to be to not miss anything. Three cars is a lot of work, but Vinny has a fantastic crew to keep those cars going, and this Sportsman car pretty much drives itself. I don’t think the results showed with the Sportsman car, but our goal was to make all three shows and run every lap, and we did that. We mostly brought it home in one piece, their 4* cars look good compared to what’s left of the Sportsman car from people trying to win on lap one.”

Following two hard wrecks in the Sportsman event, Root brought home a battered seventh. Following that, Root claimed 13th in the 358-Modified feature, and then 18th in the Eastern States 200.

“We weren’t the most competitive car out there, but we weren’t lacking either,” stated Root. “A lot of that is just me getting used to the bigger motors, I’m still new to it and a lot of these guys have been doing it forever. I know these top guys didn’t start winning these big races right out of the box, so I just have to keep learning. They’re a lot different to drive and the competition is pretty insane.”

“I think I’m definitely getting used to the motors, but on top of that, my car and their cars are totally different packages,” Root said. “I’ve been running Bicknell, and they’ve always had Teo. I feel like I’m getting a handle on the extra throttle control with the big motors, but the cars definitely drive different and react differently to adjustments. I think we’ve made solid progress getting me comfortable in the car, and Teo is making good progress on their new chassis, so we’ll head to work in the offseason and hopefully pick up strong in 2021.”

For now, Root is putting away his cars for the winter, but should be ready to fire strong in 2021. Stay tuned for the team’s plans, as Root takes the leap to the Modified ranks on a regular basis.