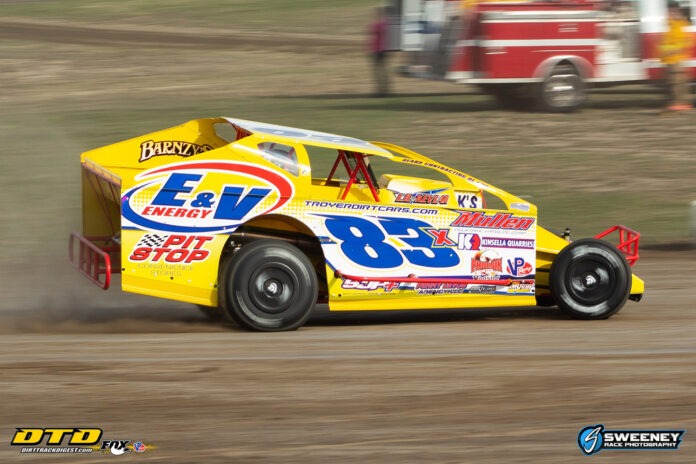 Tim Sears Jr. has had a very consistent racing career, with many variables such as home tracks, sponsors, car colors, and more remaining rather stationary. Sears has always campaigned a Bicknell chassis, but in a time where Bicknell cars are flying off the shelves, Sears is deviating. Sears debuted a new Troyer chassis in style during Saturday’s Super DIRTcar Series event at Can-Am Speedway, starting eleventh and bringing it home in fifth.

With Sears competing in a Bicknell mount long before he moved into the Big Block ranks in 2012, the obvious question was “why?,” especially considering Sears ended 2020 on a high note, with a rare but successful trip outside of CNY to Eastern States Weekend at Orange County. In said trip, Sears nearly won the 358-Modified feature and finished fourth in the Eastern States 200 at a track he had limited experience in a Modified at.

“Ted Barcomb and I have always gotten along well, and he got linked up with Troyer a while back,” Sears stated. “He parked next to us at Brewerton with his car driven by Rob Bellinger these past few seasons, and we got to know him and his deal pretty well over that time. Him, my uncle Tom Sears Jr., and I got together at the end of last season and started thinking about putting something different together, and right about now I’m feeling pretty good about it. We just saw some of the things they were doing and figured we’d give it a go.”

Results after a chassis change seem to vary drastically from driver to driver. Some struggle for months, but others seem to find victory lane moments after delivery of their new car. Sears notes the transition was smooth, and given the setup differences between the Bicknell and Troyer, or lack thereof, there should not be much of a learning curve.

“We were super happy with how we ran at the end of last year,” noted Sears. “We were quick in both the big-block and small-block, and we basically took everything from that car and used it tonight, so it definitely didn’t seem to be a huge change. It was all right there, we had some nice forward drive and it didn’t get tight on me at all tonight, so it should just be fine tuning from here because it drives real nice and is really smooth. My first impressions of this car have left me very excited about what we will have after we get some more time with it.”

Sears now puts himself in an interesting position where his big-block and small-block rides are on different platforms. The car he raced at Can-Am is the only Troyer in the Sears Racing stable. Traditionally, Sears has always raced his own equipment, but for some shows last year, he slid behind the wheel of the car usually occupied by his uncle.

“The small-block is still a Bicknell, that car is owned by Mullen Industrial Handling, where I pay for the big-block stuff,” Sears stated. “That’s the car Tom has raced for a long time, but I’m running it in small-blocks now. Tom’s son, my nephew Brett, is running novice Sportsman at Fulton, so Tom is focusing on that while I drive the Mullen equipment. We got a win here at Can-Am with that car last season, so I think we can have two good seasons with the two different cars.”

Next up for both Sears and the Super DIRTcar Series is a visit to Bristol Motor Speedway from the 22nd to the 24th, where Sears tries out his new ride on neutral territory for all.