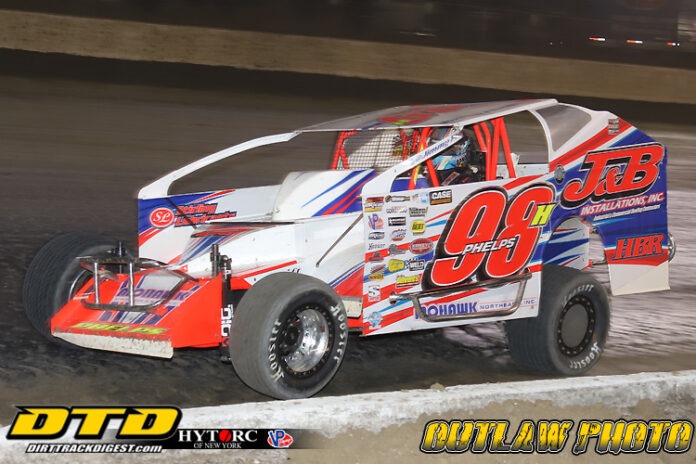 BARBERVILLE, FL – Prior to Saturday night, Jimmy Phelps had never reached the top step of the podium at Volusia Speedway Park. It wasn’t due to a lack of speed – Phelps had been close many times. While Phelps finally scored the elusive race win on Saturday, he also earned the crown of 2022 DIRTcar Nationals Champion.

On Tuesday, Phelps started off with a seventh-to-fourth run as Stewart Friesen and Peter Britten battled for the win. Wednesday night saw Phelps start on pole, leading almost the 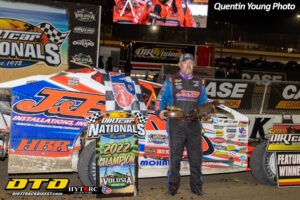 entire race only to be nosed out at the line by Britten, a .025 second margin of victory. By this point, Britten seemed to have the hot hand and was the man to beat for the DIRTcar Nationals title.

Thursday’s action saw Phelps start tenth and finish sixth, while Britten and teammate Max McLaughlin finished on the podium. Friday is when the points battle began to tip, as Britten had a bad night and McLaughlin scored the win. With Phelps charging to second on Friday, the points battle was now wide open. McLaughlin entered the final night with a narrow lead over Williamson, Phelps, and Britten.

Phelps did exactly what he needed to do on Saturday, picking up five bonus points for being overall quick time, and five more by winning his heat. With McLaughlin not winning his heat, Phelps took over the points lead by a single marker before the feature hit the track. Then, Phelps drew the pole for the feature.

Realistically, drivers had about fifteen laps to settle into their eventual finishing positions, barring any tire problems. Phelps remained up front, with Williamson close behind. McLaughlin got buried at the back of the top ten, but early running order didn’t particularly matter as all three of Phelps’ title contenders had tires go soft in the final ten laps.

Phelps drove straight and smooth to make it to the line first, grabbing his maiden win and the title in one swing.

“I’m not going to beat around the bush, the draw was a huge part of all this, tonight and some other nights,” Phelps said. “I thought we gave one away earlier this week, but overall we had enough speed all week to put ourselves in position to capitalize on nights like tonight. The only time we went backwards all week was when we started first and finished second to Peter.”

The last couple seasons, HBR was a one-team operation with Phelps’ 98H. With the re-addition of McLaughlin, the team looks stronger than ever as a whole. McLaughlin entered 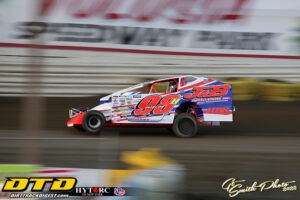 the final night as the points leader, and Phelps left the champion. A combined six podiums for HBR in five nights of racing.

“We know going home we have some really fast cars,” noted Phelps. “Having the second car with Max just helps us as a whole team, and he was super quick all week too. It just proves how good this HBR team is to come down here and have two cars in title contention in the final night, and contending for wins every night out. It’s a major confidence booster heading back north, I have a while before the next Series race so I’ll be feeling good for a bit.”

With a few firsts already out of the way, Phelps now turns his attention towards his first ever Super DIRTcar Series championship. Phelps has finished second or third in Series points in seven prior seasons, and has already started this year better than ever.