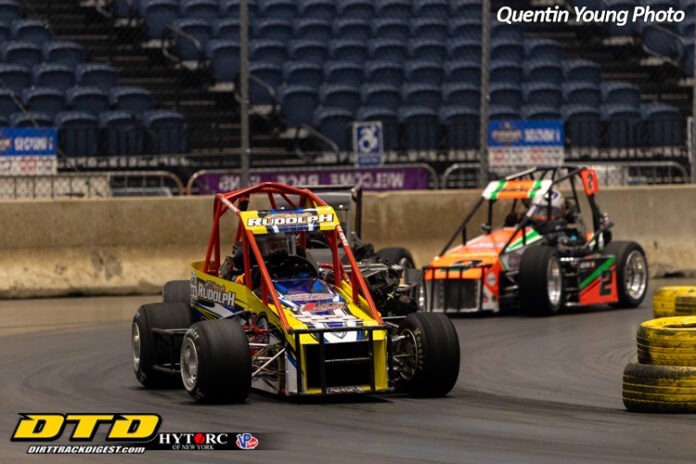 SYRACUSE, NY – To qualify cars for Saturday’s TQ Midget main event at Syracuse’s New York State Fairgrounds, a trio of 20-lap semi-features were held. Standing in victory lane at the end of the night were Ryan Bartlett, Briggs Danner, and Tim Buckwalter.

While these three drivers scored a trophy, they aren’t quite sure where they’ll be starting for Saturday’s feature. The top three of each Triple 20 are locked into the main event, but will run a pole shuffle prior to the race to determine their starting order.

In the first Triple 20, Anthony Sesely and Andy Jankowiak battled for the lead throughout the first half of the race, but just prior to halfway, the two made contact. While Sesely spun, Jankowiak joined him at the tail of the field, handing the lead to Bartlett. Bartlett held tough out front, fending off a late charge by Timmy Solomito on a green-white-checkered finish to score a narrow victory. Sesely and Jankowiak rallied from the back to finish third and fourth respectively.

“I won a race like this in Niagara Falls, but this is my first win in an Indoor Auto Racing Championship series race,” Bartlett noted. “This indoor deal, you got to be lucky and be in the right place at the right time, and luckily we were and capitalized on it.”

Regular TQ runner Joey Bailey led the way during the early stages of the second Triple 20, but minor contact with Danner got Bailey out of shape. Bailey dropped to fourth, while Danner inherited the lead over Tommy Catalano. Bailey tried to get third back from Erick Rudolph, but after 20 caution-free laps, it was Danner winning over Catalano, Rudolph, and Bailey.

“I feel like I could’ve had a prelim night win at Atlantic City, but it’s a lot of luck of the draw,” Danner said. “I got into the back of Bailey, I didn’t mean to do it but we got bottled up on corner exit with lapped traffic, but it’s such a small track it’s hard to avoid it when we get jammed up.”

The third and final Triple 20 was largely dominated by Shawn Nye. While Nye was on cruise control up front, Buckwalter and Scott Kreutter slowly climbed through the pack and into second and third. Coming to the white flag, Buckwalter snuck under Nye, and Kreutter did the same. At the finish, it was Buckwalter winning over Kreutter, with Shawn Nye holding off Andrew Nye for third.

“A thousand bucks feels pretty good for a qualifier,” Buckwalter stated. “It was a good race, it took me a few laps to set him up and we were able to get by. I get such a good car for these races, I really just have to do my job of keeping it in one piece.”

Racing resumes at 7:00pm on Saturday, capped off by the TQ Midget 40-lap feature. Additionally, the TQ Midgets are joined by the Champ Karts and Slingshots, who will contest a pair of 20-lap events.