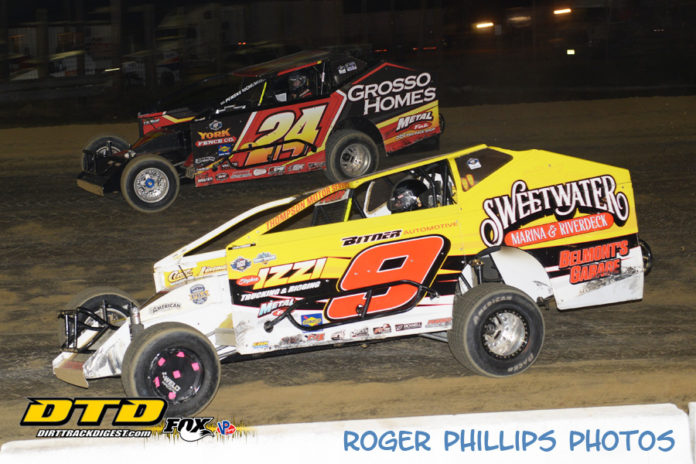 When the green flag flew, it would be Justin Grosso and Joe Toth leading a talented field of drivers into turn 1 with Grosso taking the early lead.  Meanwhile Dylan Swinehart and Nico Flammer would be side by side early for 3rd as everyone would be looking for room to breathe early in this event

2019 North Region Champion Tim Hartman would also be on the move early getting by both Flammer and Swinehart and putting his 22 machine into the 3rd position, but Swinehart would gain some strength and would look to get back by Hartman for third.  Meanwhile, Sam Martz jr and Tanner Van Doren two young guns would be on the move further back in the pack.

The yellow flag would fly on lap 12 for the 8 or Ryan Higgs, who went off the first turn in a hard crash.  He would walk away but his night would be over.

When the racing resumed, Grosso once again extended his lead while Adam White worked around Nico Flammer for the 5th spot.

By lap 15, Grosso began to enter lapped traffic as Tanner Van Doren would pass two cars moving him into the top five with only 10 laps remaining.

With Grosso firmly out in front, a battle was forming for the 3rd spot between Sam Martz Jr and Tim Hartman Jr.  With only a handful of laps remaining, Martz would get by the Hartman 22 for the final podium position.

A late race caution on lap 24 for a slowing Dylan Swinehart added some intrigue as it brought the field back to the bumper of the Gross 32 machine, but Grosso was up to the challenge, cruising to victory at the Georgetown Speedway.

“It was a crazy race, I saw Joe on the bottom once and a while but I knew I was good on the top.  When I got in that bite she’d just dig” said a happy Grosso in Victory Lane.