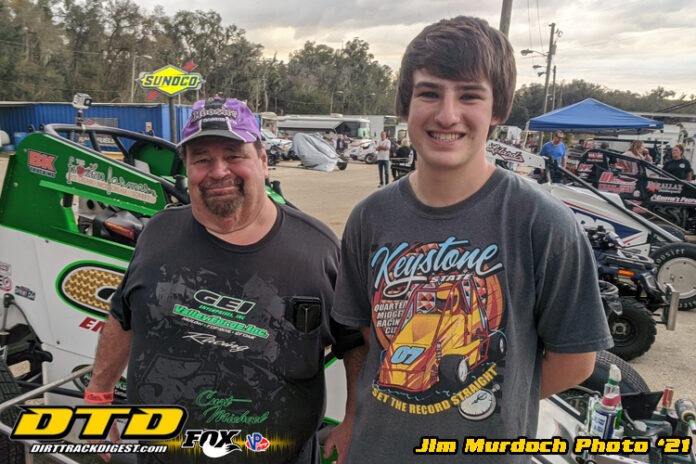 Briggs Danner just wanted a chance.  When he got the call to drive for Bill Gallagher in the USAC East Coast 360 race at Bridgeport Speedway (NJ) last September he was beyond thrilled and simply wanted to finish.

The 19-year-old did more than finish. He won his first ever start in thrilling fashion, driving the GEI Enterprises/Valley Forge Incorporated/Transfleet Concrete green and white famed 5G to victory lane at the Logan Township high banks.

“I just wanted him to finish the race in one piece.  He was doing quite well.  We had Timmy Buckwalter in the car and we needed somebody after he got hurt and me and Curt Michael were talking.  We wanted to get a young guy we could work with and bring him up,” said a grinning Gallagher just before hot laps at Bubba Raceway Park for the USAC Winter Games XII National Sprint Car opening night.

Curt Michael and Bill Gallagher put together an unprecedented 31 year partnership in URC competition, earning dozens of wins and championships.  That ended when Michael retired, focusing his efforts on running the URC and USAC 360 clubs.


After the win at Bridgeport, Gallagher offered the young Allentown, Pa., driver an offer of a lifetime – to drive full time in 2021, chasing Rookie of the Year and the overall points in USAC East Coast 360s, with selected National events in the 410.

“I don’t expect to go out and win, but just racing with the best of the best in the nation will help you out in the long run. I think it will be beneficial, especially the local swing around the East Coast,” said Danner, proudly wearing his alma mater Keystone Quarter Midget Racing Club t-shirt.

Danner locked in an eighth fast time out of a record 44 cars in practice night at the tricky Ocala, Fla., Bubba Raceway Park in just his first time ever in a wingless 410 Sprint Car.

In Thursday night’s action, Danner finished 21st, bringing the car home in one piece, surpassing the goal of just qualifying against the best wingless drivers assembled in the pits.

He says years of running wingless micro sprints and Tobias SpeedSTRs helped prep him for this moment.

“It was a big jump. Micros were comparable. The SpeedSTRs were so much different. It was a difference but knowing the track and getting comfortable, that was a big part.”

In addition to running full time with the 360, look for the 410 Gallagher prepared 5g to run both Eastern swings of the USAC Amsoil National Sprint Car Series.  Danner also says he will run double duty in the Modified when the sprints are on the card.  The season will become even busier once Kutztown PA’s Action Track USA opens in May.  Danner will once again pilot a wingless 600 micro sprint and SpeedSTR, bringing his expected races in 2021 to at least 70.

“Do the best we can. I would like to have USAC Rookie of the Year and get consistent finishes and do well in points, but just get as many laps as we can and continue to learn.”