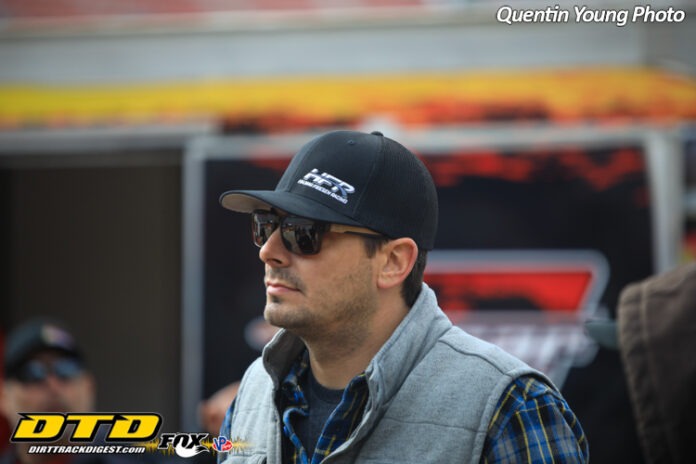 Stewart Friesen broke out the proverbial broom on Friday night at the Bristol Motor Speedway in the first ever Super DIRTcar Series race at the famed oval in the Bristol Throwdown.

Friesen set the track record, dominated his heat and then worked from the eighth starting position on the outside of the speedway to take the checkers allowing him to complete teh clean sweep.

The only hiccup on Friesen’s run to the win was his eighth starting position.  It wasn’t ideal, as passing was thought to be at a premium, but that wasn’t the case.  Friesen went to the outside of the speedway.  This proved to be the difference in the event.  Everyone else hunkered down on the bottom or ran the middle.  Friesen went to the moisture near the wall.

“It was just a little bit choppy on the bottom.  Guys were moving around and it didn’t get a chance to lay a strip of rubber on the bottom and that was the key.”

Late in the 40-lap event, his ability to run the top became essential as he gapped the field while closing in on slower cars.  Those cars were utilizing several grooves on the race track forcing Friesen to make adjustments on the fly.

“It was pretty sketchy,” stated Friesen.  “I knew we had a fast car so I just wanted to take care of it.  You can get in trouble here.  I know with the truck you get a run on somebody and they come up off the bottom and you’re pinching the wall.”

It all worked on as Friesen kept his Halmar No. 44 at the front.

Friesen was disappointed with his results after the Camping World Truck Series and NASCAR Cups Series events a few weeks ago where he wasn’t able to pull off the win.  Friday made up for that as he made history while getting one of the most sought after trophies in racing, a gladiator’s sword.

“It’s pretty sharp,” joked Friesen.  “We might have to take a file to it and dull it down if Parker (son) is going to be wielding that thing around.  This will be right on the mantel next to the Eldora shovel.  That one sits right in the living room.  It’s the only one that Jess (wife) says is allowed to stay there in the living room and its very special.”

The win allowed Friesen to bring attention to a new foundation launched this week to bring increased awareness and assistance to those seeking help with Autism.

“We’re a big proponent of ABA therapy,” commented Friesen.  “Parker was diagnosed very early at a year and a half.  It’s been tough, but he’s been doing so great.  He’s going to start kindergarten next year.

“There is kind of a gap between being diagnosed and therapy.  New York State has early intervention, which is the program that Parker was enrolled in, but it takes months and its tough.  Our goal is to help people bridge that gap, help organizations try to bridge that gap with people that get a diagnosis to get a phone number.  We’re trying to start this foundation to give people a place to call.  We feel like that is the missing link.”

As part of raising awareness, drivers who run the decal on their race cars with the Super DIRTcar Series are eligible for a $250 bonus at the end of the night.  For Saturday, Bear Archery offered World of Outlaw Sprint Car drivers a $500 bonus if they were running the decal and win as well.

Friesen and the stars of the Super DIRTcar Series conclude their first trip to the Last Great Coliseum on Saturday night.