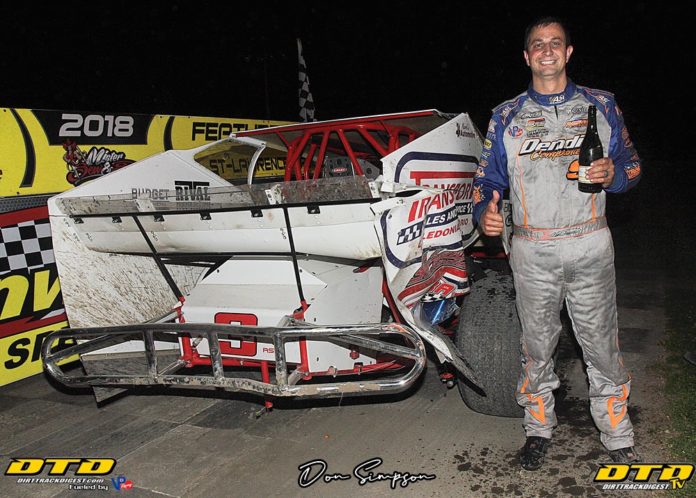 With the racing world in the Northeast at a standstill, some have taken to virtual racing.  This type of racing, unfortunately, is not for me, and many of my generation would think the same, as we would like to see a race in person, which may be one of those races you never forget. 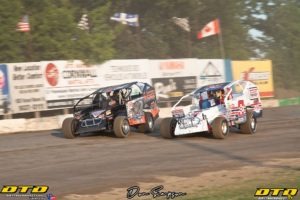 The good news of recent is racing may get underway in the coming weeks, as the Short Track Super Series is about to get underway with an invitational event. There will be 30 made up from the South region and the North region drivers as well as those picked at random, but with no fans in the stands. On May 21-22, the Tri-County Racetrack in Brasstown, North Carolina, will host the live event on Dirt Track Digest TV.  Meanwhile, here in our area, we are still on hold.

With the news of this event, I wonder how this season will unfold for the current Short Track Super Series champion Matt Sheppard

Sheppard who has proven time and time again that he is one of the most talented drivers on dirt.  He captured the 2019 championship title in style last season, winning the most lucrative championship in all of Northeast dirt Modified racing.

As Matt prepares to get back in the driver’s seat, we here sit and wait, as the tracks in the Northern are still silent.

All this time on our hands in lock-down mode, I cannot help but remember one of the most exciting racers I have ever seen in 41 years of covering motorsports — the 2018 Race For Cure 150 at Cornwall Motor Speedway with $12,000 on the line.

There is nothing like the sound of a small-block Modified wide-open going down the back straight at Cornwall Motor Speedway.

Combine that vision along with witnessing one of the most amazing drives a racer could achieve on the tough ¼ mile track and you have one of those memorable moments in time. The event attracted racers from far and wide, to do battle in the hopes of taking home that cash prize.

For one team, rolling into the pits early that July 12 day, setting up their small inconspicuous trailer down one of the pit lanes, was very much like any other night. The team, however, was not your ordinary group of racers; this was a team rich in racing history and going back more than five decades.

The team was none other than the Slack Transport Sales and Service Racing Team, owned by Bob and Randy Slack out of Caledonia, Ontario.

For this race, the team acquired that night one of the best drivers in the business — Matt Sheppard.

Randy Slack explained: “The track promoter contacted us a couple of times to see if we were interested in coming. It’s tough for the team to make these extra shows because at that time it was mostly Bob and myself maintaining the car. The other factor was we were racing at our home track of Merrittville the Saturday after the Thursday event.  The other situation was Tim Fuller, who drives our car quite often was running his own car that night.  However, we are always up to run a race, especially for that kind of money.

“Bob then talked to Matt and he agreed to drive our car. Bob and Matt work together closely on the car set up. We are always trying to prove what our team can do with a good set up and our W 16 engine with the help from Matt that night, things turned out good for our team.”

The Race for Cure 150 was also the first round of the North reigned 358-Modified Series and drew in 43 cars to challenge for a portion of the $40,000 pot. 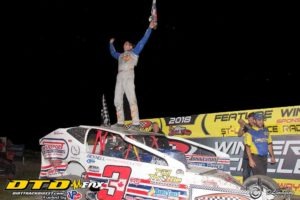 Matt at the start of the evening of racing was inconspicuous during the time trials and the heat races with a three-lap dual with Tim Fuller, fighting for the fourth-place finish in the heat race.

For the 150-lap feature, Matt started several rows back from front-runners Gary Lindberg and Jordan McCreadie.

The 32-car field took the green. By lap four the race saw its first yellow, which involved Matt, Dale Planck, and Johnny Jackson. The incident would leave the number 3 car of Sheppard sitting on top of Jackson’s car. It took the track safety crew several minutes to get both cars separated without causing any further damage. This episode put Sheppard back to the 26th position to take the restart.

From that moment, Sheppard was on a mission.

Lap after lap Sheppard was on the move, making some unbelievable passes, something rarely seen as the capacity crowd witnessed the sheer talent of the then 36-year-old as he raced his heart out being one with the track. By lap 100 Sheppard had fought his way up into the top five, with Gary Lindberg leading over Mat Williamson, Tim Fuller, and Steve Bernard.

Sheppard now had to deal with some very tough drivers but with classic Sheppard determination and time on his side, Matt slowly picked his way threw the top five, proving that he was the man to beat that night. 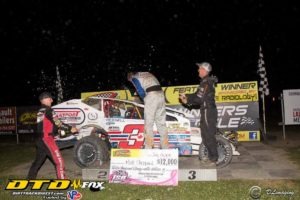 With ten laps left on the scoreboard, there was only one driver left to get by, Mat Williamson.

On the last lap, Sheppard used the outside lane to pull alongside Williamson, a hard move to make at Cornwall going through turns three and four, but Sheppard pulled off this amazing move, crossing the finish line inches ahead of Williamson, followed by Fuller.

The then 36-year-old had put on a show that resonated through the crowd and everyone was truly amazed at what they had just witnessed. 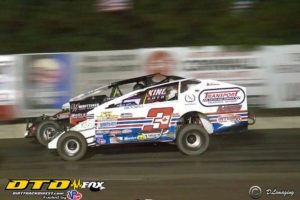 Not only did Matt win one of the toughest challenges in his career to date, coming from 26th place all the way to victory, but also he did it in a way that showed how talented this driver truly is.

Matt was truly appreciative of Bob and Randy Slack for giving him the opportunity to run their car.

“I can’t thank the Slack family enough for giving me this ride tonight. If it were not for them, I would not be here tonight!’’ Matt explained in victory lane.

For Randy Slack, that race was also one of those true memories. Randy explains: “I remember Tim Fuller saying ‘well that car is out of the way’ referring to the lap four crash involving Matt, but would later see coming threw the field on the scoreboard up into 5th ‘oh sh•t here he comes.’”

Randy recalled the drive home that night.  “Mat Williamson’s dad Randy road home with us. Bob, Randy, and I talked about the race all the way home and how close Mat Williamson came to driving Sheppard into the wall coming home for the checkered.” 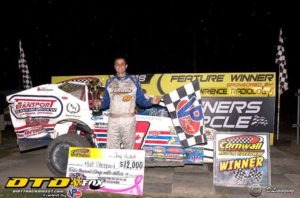 For all who were there, it was one of those races that just stays with you. What a way for Sheppard to celebrate his birthday with one of the most amazing wins of his life.

So as Matt gets ready to climb back in the car in just a matter of weeks, will this coming race be anther one of those memorable races? The only difference this time will be the fact the stands will be empty.  Fans will still have the chance to view the race live on DTD TV and maybe this will again be one of Matt’s moments in time. 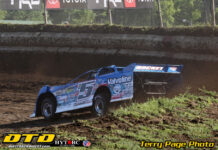