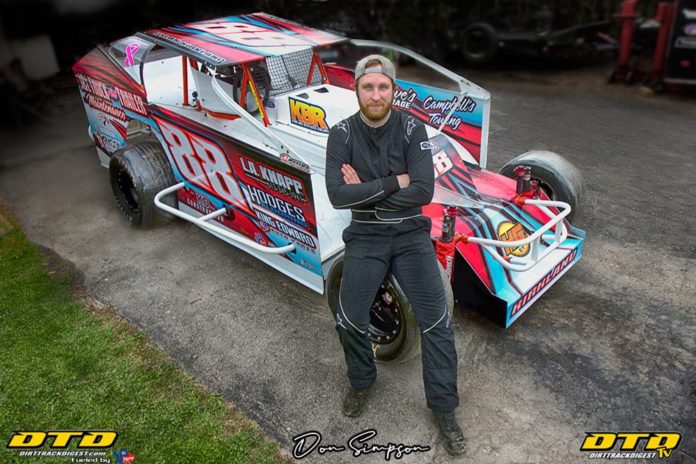 In these long days of lockdown, it’s nice to meet someone who still has some optimism that the racing season will get underway sometime this summer.

Dylan Kirkland has been waiting with optimism as he prepares to race in the Sportsman Modified division full time this year. 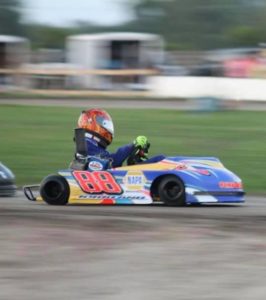 The 24-year-old from Maitland, Ont., began this journey to the Sportsman ranks some 16 years ago at the tender age of eight, racing in the Kart class at Brockville Ontario Speedway.

After that first season of learning the ropes, Dylan was racing three times a week, traveling to Brockville, then off to Cornwall Motor Speedway, finishing the week at Brighton Speedway. Those were busy years for the Kirkland family because Dylan wasn’t the only one racing in the family, as Josh Kirkland, Dylan’s older brother, was also racing in the Kart class.

Dylan raced Karts for eight years and, in the final two seasons, 2012 and 2013, he won the Fall Classic Championship race at Brockville, Cornwall, and Brighton Speedways. Dylan would also finish second in points in the junior restricted stock at Brighton Speedway.

In 2014, Dylan moved up into the four-cylinder division at Brockville Speedway, probably one of the most competitive classes at the track, with limited modifications to the engines and suspension. It really leaves it up to the drivers’ ability to overcome the challenges in this class. 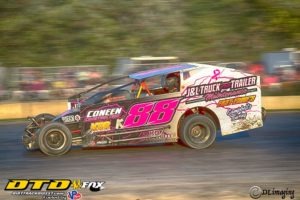 Dylan explained, “It’s a very good class for a small or large budget race team. I loved it honestly. It’s a very fun class to race in. Everyone is like family in the class where everyone helps everyone and encourages everyone in the class no matter what. From when I first started in that class, until I moved up into the Junior Sportsman division, everyone would help me. It was fantastic.”

The first few years in four cylinders, Dylan raced Brighton until his home track of Brockville Ontario Speedway opened up their season. The competition was strong at both tracks, which in one sense helped him got in the grove quickly.

The first seasons in the Mini Stock class Dylan finished third overall in the points.

The 2016 season saw Dylan progress even further as he was becoming a force within the Mini Stock division. That season Dylan would finish a close second in points. 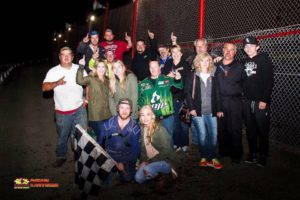 “2017 was a very special year that’s for sure,” he said.  “At the end of 2016, I decided to build a new car from the ground up. Over the years, we found what would always break in the car first so we did everything possible to make it stronger in those areas. The first night out, we got into a big accident, but still came home third. In the first half of that season, we finished all the races in the top five, very consistent. Weeks later, we then ran into car troubles with an onboard fire, which took all week to fix. The following week, I got my very first win in Mini Stock. From that point on, we stayed in the top three every race for the rest of the season. Dustin and I are very good friends so once he and I were going for the championship together, it was always close. I won three out of the last five weeks, with Dustin winning the other two races.

“The last night I won, I was racing against Joe McNichols. He’s one of my favorite drivers in the four-cylinder class. I won by half a bumper — a very special moment for me. I was in tears.”

Dylan went on to say, “It was a hard year to get through but I wouldn’t have changed anything. With my family and friends by my side, it was a very special moment for me winning the championship, as this was the first championship for KBR.”

For 2018, Dylan raced half the season, as the car was sold mid-summer. For the remainder of the season, Dylan would help Josh, his brother, who was now racing in the Sportsman division.

At the same time, he began building a new car as he was making the move up into the Sportsman Rookie class for the 2019 season. Once again, Dylan found himself in the most competitive class in 2019 at the Brockville Ontario Speedway.

With only 36 points separating between first through to fifth in points, Dylan had the toughest season so far in his racing career.

With several new drivers moving up into the Sportsman Rookie class last season, the championship chase for the top five galvanized into one of the best battles for a championship in a season for some time. Dylan ran consistent with the top five all year, coming home with two feature wins, along with ten top-five finishes. He would finish third in the championship. A good finish all around, considering it was a big learning curve to adjust from the four-cylinder class and an open-wheel car.

“When we moving up going from four cylinders to Rookie Sportsman, the previous years of racing in the four-cylinder class helped me understand track conditions and how to set the car,” he stated.  “It kind of took me back to the Go-Kart days with the open-wheel. All in all, it was a good season of learning.”

Dylan finished off the 2019 season racing in his first DIRTcar Sportsman Series Event at the Brighton Speedways Applefest Weekend. Dylan qualified for both events that weekend out of a field 46 entries, which in the end was a great experience racing against the best in the Northeast and Western DIRTcar divisions.

This brings us back to current times as Dylan waits anxiously to get back in the car to get his first full season in the Sportsman Modified underway.

The recent news out of the Brockville Ontario Speedway is that there will be some testing sessions in the coming days. Dylan’s optimism about the lockdown just might come true, allowing him to get back behind the wheel of his number 88 Sportsman and possibly in the coming weeks the start of the 2020 racing season.