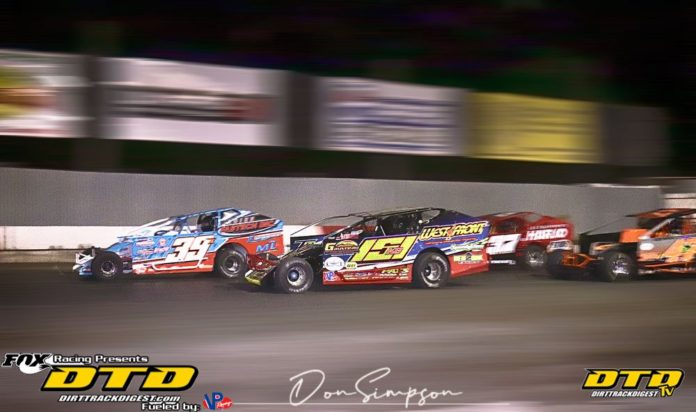 With August coming upon us, this would be considered the height of the summer and with that, the midway point of the racing season. Autodrome Granby gets underway with COVID Double Challenge with twin 25’s for DIRTcar 358-Modifieds. This will be the fourth-race of the season and will highlight fan with two feature events for each class. Sportsman Modifieds will run two 15 lap features, Pro Stocks are running two 15 lap events and the Sport Compacts are schedule for two 10 lap events.  The night will be capped off with the 358 twin 25’s.

It was a bit of a rocky start to this racing season because of COVID -19 but Dominic Lussier and the team at Autodrome Granby have managed to salvage what they could of the 2020 season considering all the restrictions.

To date, the speedway has held three highly successful races and each time the pits were full to capacity with race cars. 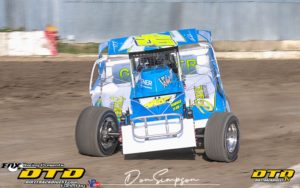 The last event saw a spectacular race. The 358 Modifieds took the start of the 40-lap feature with Claude Brouillard and Jean-François Corriveau in the front row. Within the first 15 laps, a three-way battle ensued between Steve Bernier, Mat Williamson, and Francois Bernier. On lap 24, a serious incident involving several cars brought out the red.

Once the track was cleared and with the restart of the race, Williamson pulled into the lead on lap 30. From that point on, Williamson took charge of the race to come home with the win, followed by Steve Bernier in second, Francois Bernier in third, Davis Herb fourth, with Steve Bernard fifth.

Yes, the win by Williamson was clear, but this would be the third time that Francois Bernier stepped on the podium as he won the first two rounds, giving him the lead in points. 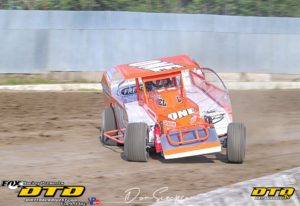 However, one driver who is also in the mix and has been in the top four of each race is David Herbert. Herbert is one of those drivers you never discount as he has more wins in Quebec tracks than any other driver.

Hebert explained, “For August, I will bring my racing game to win. In July, we tested a lot of new things along with setups and I feel we are ready for a win. The team has worked very hard to battle the Bernier brothers for the last year and we feel that we can be just as good and be very fast at Granby.”

In the Sportsman ranks, Mose Page and Even Racine have both been having a great season so far at Granby with each of them ending up on the podium in the first three races.

Racine said, “For the start of the season I’m super happy we have been very consistent and my goal is to stay that way all season. For August, I intend to perfect my new coil car which I tested in the last race. The car is very fast and I hope to continue to make the podiums regularly. The competition is fierce in Granby and the track is very fast, so we have to continue working hard on our adjustments to be ahead and perform well. All of these will be my challenges for August.”

Mose Page is also pulling out all the stops going into August and has a clear plan. Page commented, ”The plan is gonna be simple, finish all races first and be in the top of every race if we want a chance of the championship. I’m really happy about the season so far. I can’t ask better than three podium on three races. We work this year with a very low budget so we have to keep the car straight and working for the next races.” 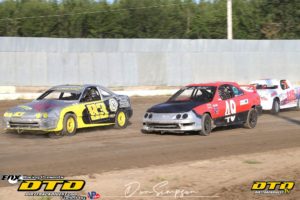 In the Sport compact there is a good battle setting up between Alexis Charbonneau and Mathieu Voghell. Once again, like in the other classes, each of these drivers have been in the top three multiple times over the last three events and are going into this next race with some confidence of doing well.

In the Pro Stock division, Yves Hamel has taken a small lead in points over the group and if he keeps this momentum going, it may be hard to stop.  There is still time for second place in points C.D. Beauchamp to reel in Hamel.

The 2020 season is a once in a lifetime situation, but Autodrome Granby has worked well with the situation and is moving forward into the second half of this year’s racing on solid ground.

Autodrome Granby spokesperson Charles-Oliver Lampron explains: “Yes so far, things have been well, alternating with Cornwall as well. Really happy with the turnout. We had Saturday with 358 Modifieds, we had a lot of cars in the pits throughout each category, everything went smoothly and I think everyone had a good time, which makes all the effort to put on some races worthwhile. It obviously remains a challenge to do that. I don’t see it being a long-term solution, but so far so good. We keep working on the possibility of having fans in the stands, obviously and I think a lot of people are anxious about being back at the race track and we can’t wait for it either. It’s just not the same without fans. I’m not sure exactly yet how I see the schedule shaping up for August. We’d like to race more than once every two weeks, but everything is still up in the air at this point. We’ll go back to the drawing board and see what we can come up with to spice things up a little bit for our drivers and fans watching at home.”

As Charles expressed, the team at Granby is working hard at getting fans back in the stands sooner than later. As at many tracks, the racing is good, but without the fans in the stands, its just not the same atmosphere at Granby as previous summers.

For the COVID Double Challenge, once again the race can be purchased by visiting the Autodrome Granby website and you can watch all the action in the comfort of your home in high definition. As in the last event Autodrome Granby will also have ten VIP rooms for dinner. Each room will host four people with dinner — a great night of racing for the hardcore fans. You can order by visiting https://autodromegranby.com 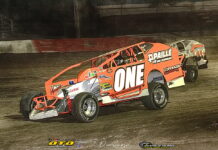 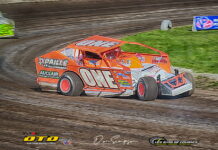