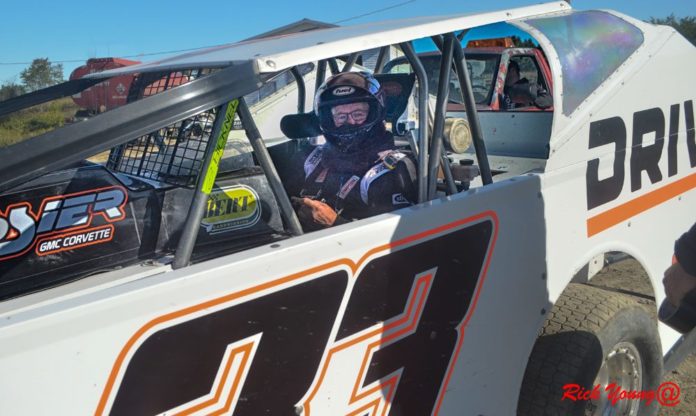 It has been over ten years since I have been reporting on local races and drivers for Dirt Track Digest. Over this time, I got to meet and know many drivers, a spin-off of covering those races.

I have always been amazed at how these men and women can strap themselves into these powerful machines and then get on the track with 30 or more cars, racing for the win. Being behind my camera lens and writing pen, I often wondered how it felt going around the track in a Dirt race car. 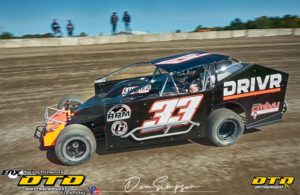 Thanks to Dominic Lussier and Alex Lajoie, I recently got the opportunity to test one of their DRIVR Simulation Sportsman Modifieds at Le Rpm Speedway, located on the outskirts of Saint-Marcel-de-Richelieu, QC.

Once at the track, I knew I was in good hands with Alex as he is the 2019 track champion at both Autodrome Granby and Drummond. Both he and partner Dominic went over the entire process as they helped me with instructions while as I was getting into the car.

First off, I must say the experience was something I will never forget. My main objective was to get a sense, in a small way, of what drivers truly feel when they are racing their Modified. Thirty laps was what was needed to simulate a true race scenario. Then there is the fact you must fit yourself in a fire suit, gloves and helmet. 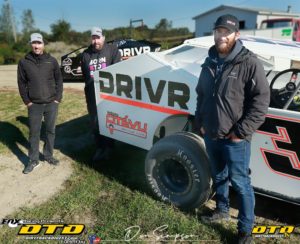 Before being strapped in for my test run, I was fortunate to have my good friends Francois and Steve Bernier join us at the track. Both have won numerous 358 DIRTcar track championships and it was over the top for them to give me a few pointers before going out on the track.

Once out on the track, Dominic radioed the instructions and after a few warm-up laps, I was let loose. On each lap I tried to push myself harder and concentrated on my line. I knew if I could get into a good rhythm, I would get faster.

By Lap 15, I made a few good laps kicking in the rev-limiter along with a good race line around the track. This, however, was short-lived as fatigue set in. Once this happens, everything was downhill and this made it harder to concentrate. By Lap 30, I was really in a sweat, proving that drivers have to be in good shape to do this multiple times a week.

Once back on the solid ground, I reflected on what I had just done and whether I got what I was looking for. The answer is yes and with so much more of my understanding of what drivers have to do weekly to compete in this high energy sport.

The day, however, was not over. Also joining me this day was my close friend and Dirt Track Digest colleague, Rick Young who was also given the opportunity to strap into a race car. As like me, it gave Rick a chance to feel what a Dirt Modified feels like after photographing them for so many years. 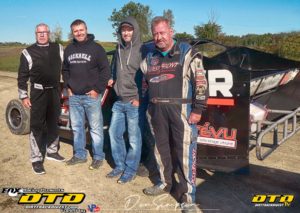 Rick said, “I must admit I was a bit nervous as it’s been over 30 years back in the UK that I drove a race car and they were nothing like this. Once I climbed in, I had the race-receivers fitted to my ears so I could be given the instructions while on the track. Also on hand to give us moral support and coaching that day were our good friends, Steve and Francis Bernier, who made the trip from St Hyacinthe to share our special day. I was then pushed out on the track like Don and within a few minutes, I was on the move. Taking things easy for the first few laps, I then got a little quicker as my nerves calmed down. I was enjoying the experience and when done, I parked the car on the back straight and shot the car down. What a great experience as I got a sense of what drivers have to contend with while out on the track.

“The DRIVR Simulation is so cool. It is well organized, professionally done, and a big credit to Dominic and Alex and the team. I recommend this to any Dirt racing fan who wants to get a feel of what it’s like for their favourite drivers they watch each week.” 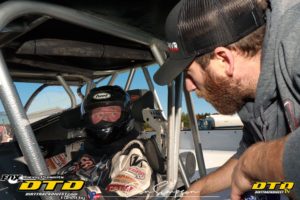 DRIVR Simulation, was initially created by Alex Lajoie as a virtual driver simulation online to ride out the COVID-19 restrictions at home. The drivers would race one another online with special events, hosting real race drivers to compete in this virtual world.

Once the restrictions began to lift, Alex aome up with an idea of a real DRIVR Simulation using true race cars on a Dirt track. The idea was then presented to Dominic, along with his partner JF Tessier, who both saw the potential DRIVR Simulation.

Dominic explained, “The DRIVR Simulation so far has been very popular and well received. There is definitely an opportunity here to give race fans the chance at driving a real race car. However, it does not stop there. The popularity of the DRIVR Simulation earlier in the year has also given us ideas on expanding this venue with custom drive simulation chassis. We are also looking at ways to expand out on the real track experiences, like driving schools to train drivers. It is very fluid with ideas on where both venues and where this can go”

I did achieve what I set out to do — experience what drivers do — in a small way. Some will say it’s easy, anyone can do it, but that’s easily said if you’re the only car out there and testing at limited conditions. The fact is driving a race car on dirt takes a great deal of skill, no matter what the class. Yes, it’s expected the more powerful the car, the more skills you will need. Each class has its idiosyncrasies which you must learn. The DRIVR Simulation gave me the chance to see this and I would recommend this experience to anyone.

If you would like to test out your skills and experience this, please visit their social media pages for further information at https://www.facebook.com/DRIVRSIMULATION
or visit their website at https://drivrsimulation.com/. There may also be a chance of a testing day in the coming weeks at the Cornwall Motor Speedway.