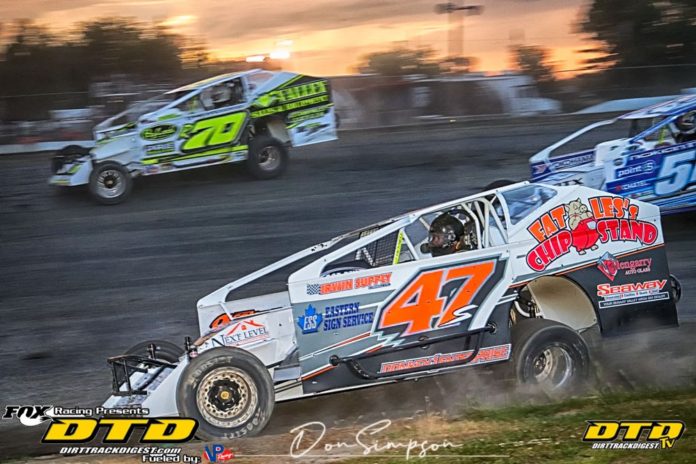 The Cornwall Motor Speedways Fall Showdown presented by Bicknell Racing Products is set to get underway Friday, October 9, for three days of racing. This will be the biggest show of the year for DIRTcar racing in Canada. The Canadian Nationals series and the TAS Sportsman series will see the crowning of each series champion.

The show was forced to scale back its schedule by health officials from the originally planned event size. Regardless, this will still be the biggest show of the season at the historic track and the entire weekend of racing will be covered live on 360 Nitro TV.

This final weekend of racing will see two 50-lap races for the Fat Les’s Chip Stand Canadian National series for Modifieds along with two 50 lap TSA Sportsman series races. Both series will conclude on Sunday, October 11, with a 125-lap marathon in the Modified division, and a 100-lap race in the Sportsman division.

Corey has been here before and knows what the challenges will be going into this final weekend of racing .

In the TSA Sportsman series, the competition is very close. Jarrett Herbison, who is leading the pack, is not out of the woods yet as several good drivers are in close range. Only nine points separate first and fourth place. The race for the championship will be fierce.

For current points leader Jarrett Herbison, it will be a tough weekend of racing. This young hard charger has really come into his own game this season. Jarrett will race hard to keep his lead. 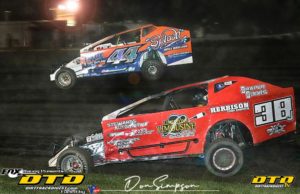 Jarrett explained part of his game plan going into the final race, “I think the big thing will be making sure to stay out of trouble, with four of us right there with each other. Any mistake could cost you a chance at the title. At the same time, you need to show speed and run in the top five in each show and give yourself a chance to come Sunday in the 100 lapper. Obviously, with Johnathan being a multi-time champion and successful anywhere he goes, Robert has won a lot of big races and is a threat any night. And Gab being the wheelman he is, it’s just an honor to be battling with these drivers every week!” 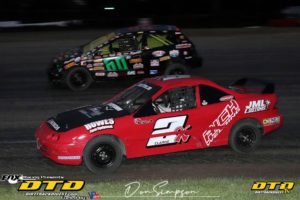 Track spokesperson Martin Belanger, who is super excited about the coming race said, “Yes if we look at the Fat Les’s Chip Stand Canadian Nationals, the champion will only be known on Sunday after the final 125-lap event. The battle will be close during the three events, scheduled during the Fall Showdown Weekend.

“Corey Wheeler seemed to be on a roll in September with a first and second, but you can’t count out Kyle Dingwall who continues to bring consistent runs every time. It is much the same for Steve Bernier, Ryan Arbuthnot, and David Hebert. With a field of more than 30 cars expected with the best from Ontario and Quebec in attendance each night, it will raise the challenge for these drivers. I am sure you will see these names at the top of the board during the weekend.

“The TAS Racing Sportsman series is even closer than the Modified series. Jarrett Herbison was impressive coming from the back and finishing third on September 27. He has been strong all season long. Robert Delormier always brings his best runs when the challenge is tough. Gabriel Cyr and Johnathan Ferguson will be there until the end as well. And let’s not count out Cedric Gauvreau who can still get some solid runs.

“The Sportsman field will be the toughest of 2020 as some of the best from the Niagara region are already registered such as Brad Rouse, James Friesen, Cody McPherson and the Racine brothers, Even and William. With the interest building around this event, we could easily reach 40-45 entries for the weekend. It will be our own Canadian Super DIRT Week and there is no better way to close out our 2020 season!”

As we get closer to race day, we have learned that this race was very much in jeopardy as heath officials were a bit nervous about holding such a large event with the current health situation. However, Raymond and his team worked with the local health unit to come up with a modified race schedule that meets everyone’s needs.

Raymond Lavergne stated, “After meeting with local health officials, we have been given the green light to go ahead with the show, but some changes were required to proceed. It wasn’t the news we were looking for, but on the other hand, we had to comply with health officials or they were going to shut things down. All-in-all, we are very lucky to get the green light and now we are pressing ahead with the changes. This, in the end, will be one good race to finish what has been a once in a lifetime race season, we hope.” 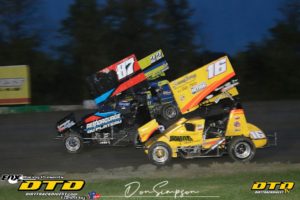 One of the recommendations by health officials was that there will be no fans allowed in the stands. However, all the action can be viewed online via 360 Nitro TV. Log on to 360nitro.tv and order your page online –individual days or a three day-package — where you can see all the action live, in the comfort of home.

This season of COVID-19 has put up some challenges for the racing community. Raymond Lavergne and his team at the Cornwall Motor Speedway are committed to ending the season in a big way. With the crowning of the 2020 Fat Les’s Chip Stand Canadian Nationals Champion and with the crowning of the 2020 TSA Racing series champion, it is a great way to close out this 2020 season.