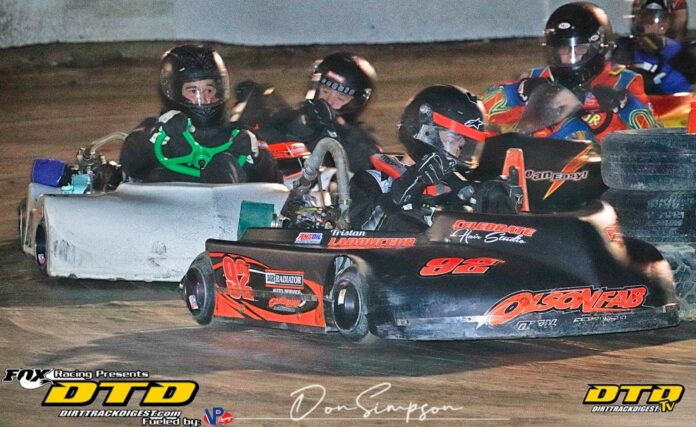 This past season was anything but normal at the Cornwall Motor Speedway. It was much the same over at the Brockville Ontario Speedway, as both tracks were under COVID restrictions all year and had a limited race program. However, there was a bit of a shining light when it came to the future stars of racing as each track had a healthy group of racers competing weekly at their respective Kart tracks.

Kart racing is a close and fast-paced event, with some very stiff competition. Drivers generally start slow, but as the adrenalin kicks in, so does the pace of the action. For some young drivers, they begin at the age of five and will work themselves up through the classes, until finally moving up to the big leagues. 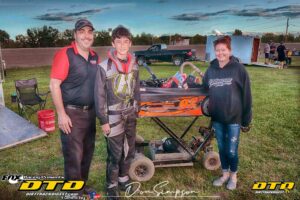 This system for the most part has worked well for many years, producing some of the best drivers in the motorsports world. Heck, even Ayrton Senna, who is recognized as one of the best race drivers of all time, started out racing Karts.

Recent news from the Cornwall Motor Speedway is that third generation racer Tristen Ladouceur will be moving from the Karting racks to the Sportsman Modified Division, following in his father’s (Joey) and grandfather’s (Laurent) footsteps. 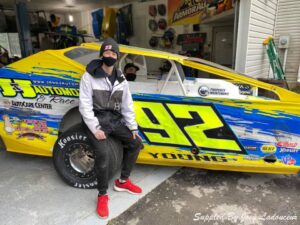 Tristen is now 14 years of age and he has been racing for close to nine years. He has progressed through the different Kart classes. This past summer, Tristan tested a Sportsman Modified at Le RPM Speedway via DRIVR Simulation (https://drivrsimulation.com).

I asked Tristen about his experience, “It was a lot of fun getting behind the wheel of a Sportsman Modified. Surprisingly, I found it in many cases, easier than driving a Kart.”

Tristan’s dad Joey added, “Tristan has been racing since the day before his fifth birthday. He’s been racing Karts ever since. He’s won three track championships in Box Stock, Sportsman 2, and Junior 2. He’s had approximately 25 feature wins. As for the Sportsman deal, I wasn’t very nervous. I was 14 when my dad first let me got lap his Modified at Autodrome Edelweiss, so I guess I felt like I was reliving the same experience.” 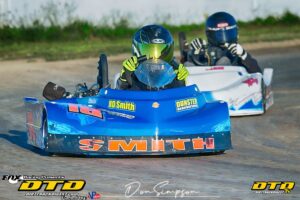 While Tristan has moved one step closer to his ultimate dream, over at the Brockville Ontario Speedway, Blake Smith has been working his way through the classes over the past few years.

Blake, who started racing at the age of five, has just finished his sixth season of racing and captured the 2020 Jr. Clone track championship at the Brockville Ontario Speedway. Blake was also the track champion in 2016 and 2019, with the runner-up spot in 2018.

Blake got the racing bug from his dad, Matt Smith. Matt has been helping crew-wise for many years, first with Chris Herbison and for the past fifteen years, Ryan Poole in the number 00,358 Modified. It was just natural for the younger Smith to want to try his hand at racing.

For Blake, the ultimate goal would be to transition into one of the bigger classes at the Brockville Speedway in the coming years, as he has been around the track all his life and it would fulfill his dream. 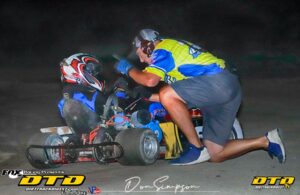 Racing the Karting racks at Cornwall and Brockville Speedways, however, is not just about the racing, it’s learning how to race the proper fashion. Many of the racers will race each other at other tracks. Both Cornwall and Brockville Speedways have a great Karting programs that have helped develop many drivers over the years. Both tracks have some of the best in the business race directors who have raced in the 358 Modified division at their respective tracks.

Joel Doiron, the race director at Cornwall Motor Speedway has been around racing his entire life. Growing up watching his father Ovid Doiron race, it was only natural for Joel to follow his dad’s lead. One of Joel’s missions these days is to pass on the knowledge he has gained over the years to the young Kart racers. 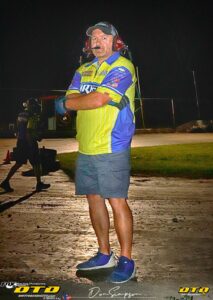 We all know that if you groom the younger competitors as soon as possible, the better the outcome.

Joel explained, “Working in uniform with the OPP for 30+ years, several of which involved the interacting and focusing on youth. As they are our future leaders, therefore requiring some of our guidance to make proper decisions. I have brought this same way of working with out youth to the track.

“I want to be approachable to the kids as I listen to their concerns and help them develop the competencies of sportsmanship and professionalism required in a good all-around racer. I want the older racers to become mentors for the younger drivers starting out, making them feel accepted in the group. Building their confidence by treating them in a calm approach and utilizing constructive criticism was a must that I instructed our entire staff of officials to use.

“The use of the one-way radio is not only a way to instruct drivers while they are on the racing surface, but I’ve used it to give racers a variety of tips on what line to use or changing a specific habit to make them more competitive and build self-confidence. The ultimate goal is to provide these kids with a fun experience without feeling scarred or intimidated. These kids are the future of racing on the big track; therefore, we need to do this the best way we can to ensure they are ready when the time comes to take the next step.” 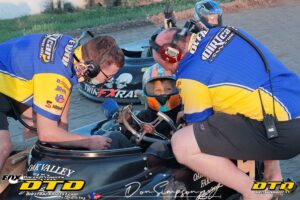 Steve Barber, race director at the Brockville Ontario Speedway, is equally dedicated and has raced in the 358 and Sportsman Modified divisions for years and brings a wealth of knowledge with him to this position.

Steve said, “I took on this role over two years ago after some serious problems arose at the track, so much so, Paul thought seriously about ending it. I had noticed that for some on the big tracks and the Kart track, respect for fellow racers was lacking. I remember thinking if we can govern young kids to develop skills instead of bigger bumpers, perhaps we could make some real racers for the future.

“Karting is such an important stepping stone nowadays, and if we can teach them from an early age, we can entrench setup and the theory of setups into their young minds. We can also show them the direction of maintenance in racing and make them more disciplined racers that will, hopefully in the future, provide for better racing.

“Each week I go to the track with an open mind. At first, it was tough to do with resistance from almost every angle. I brought in a firm but a fair practice that I use to treat everyone the same, which I use every day on the street with my job. It was tough at first, but now I rarely have any problems. Bring in an open-minded policy of talking with everyone, not screaming, has brought people on board.

“Every year, with maybe the exception of this one, I have put everyone’s interests into one room so they can state their comments or concerns at an annual meeting. Communication is everything and it’s amazing the strides we’ve made in this area by having these meetings and an open email address that anyone can email me at any time with a complaint or concern.”

“This year was the biggest Fall Nationals ever I’m told by Paul with 90 Karts registered to qualify. Parents came together to seek out sponsorship and prizes, as well as local businesses stepped to the plate to help out. One kid went home with a body, another with a complete wrap and another with $350 cash, all of them were under 12. 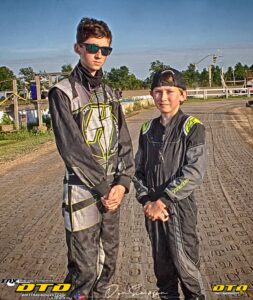 “Collectively people have come together and made it great for the kids. I like to spend time with younger racers and help them become comfortable with being on a track and behind the wheel, as there is only so much you can learn from a video game.”

“Everyone has a role to play and they know what to do. I’m big on being open approachable along with calm communication. This seems to have been the catalyst for making the Go-Kart program great again at the Brockville Ontario Speedway.”

The Karting scene at the Cornwall and Brockville Speedway is definitely doing well despite COVID-19 disrupting this season. But this is just a small example of what many Dirt tracks around North America do every week to help our young racers move forward in a positive respectful way.

These young drivers are the future of the sport. So by Supporting your local Kart track, you keep the sport alive and you may just see the beginnings of another DIRTcar champion. After all, this is how Mat Williamson, Chris Raabe and Luke Whitteker got their start.