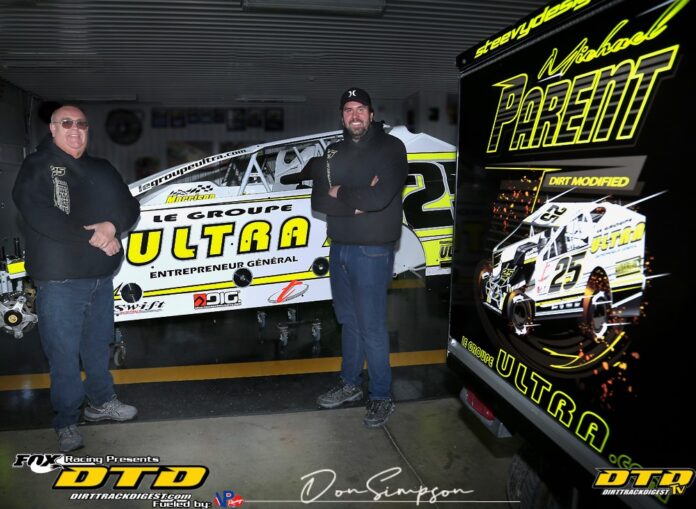 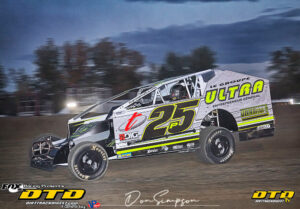 Michael Parent is a name well known within the world of dirt track racing. For the 2021 season Michael is focused more than ever to move his 358-Modified program forward.

For the past several years, Michael who in 2015 moved from Sprint Cars to race in the 358 Modified ranks, has had a somewhat bumpy transition.

All of this is about to change as the 31-year-old veteran driver is keenly focused on finding his rhythm within the 358 class as he once did in the Sprint Cars. For 2021 Michael would love nothing better than to win a championship at his home track of Autodrome Granby.

“I love this track,” explained Michael. “It’s very fast and very technical, when you get things right at the Autodrome, it’s like nothing else for me.” 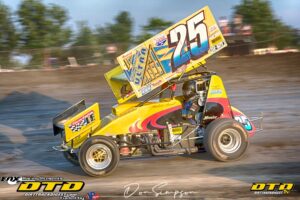 To finally put all his focus on the Autodrome has been a long path to follow as his story began back in 2006. Michael, who had great success racing ATV’s for several years before 2006, was convinced by the team’s engine builder Alain Bergeron to try his hand at racing a Sprint Car. Michael had just come off a spectacular season of racing the ATV, capturing the 2005 Canadian ATV championship. Bergeron, who already was racing in the Empire Super Sprint Series, saw the potential Michael had and the rest is history.

In the Spring of 2006 at the Legendary Fonda Speedway, Michael tried his hand behind the wheel of a 360 Sprint Car, which as he explained was quite an eye-opening experience. 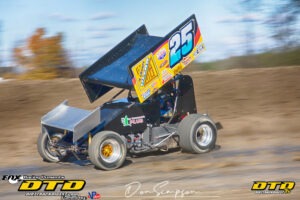 Yes, it was hard to bid farewell to the ESS family along with the other Sprints series, but the traveling was getting too much. Family for him is very important, especially with Vicky and their daughter. Michael explained to me they like to keep Sundays open for the family these days; as we all need to spend family time together. 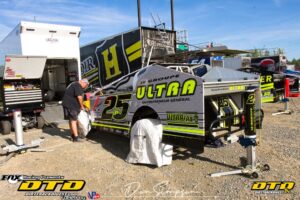 In 2015, Michael made the move into the 358 Modified division. This was a big adjustment, but it brought a sense of calmness knowing he would be racing closer to home at the Autodrome. The move also provided Michael with a new challenge to compete weekly at his home track. Something he had been thinking about for some time.

For Michael, it was a big change going from a fast nimble machine like a Sprint Car into a 358 Modified. It’s like going from a Ferrie to a Mustang GT. Both cars have a lot of power but the power band and handling are completely different.

“Getting used to this transition for me has been quite a challenge, especially the first couple of years. It was difficult for me to get used to the way the cars handled compared to my Sprint Car. In the last few years, things have gotten better and my results show this, but there is still room to improve,” Michael explained. 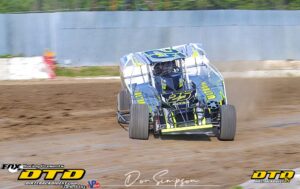 For the 2021 season, Michael would like to put more energy towards his home track of Granby. After all, it has been a lifelong dream to capture the championship there.

“For the 2021 season, I hope first of all that we will have a regular season,” stated Parent.  “We will put all the effort to have a good and consistent result at Granby, RPM, and Drummond. I think we have a team that is capable of winning a few races a year if we focus on what we have to do. As I explained earlier, I like racing at Autodrome Granby because it’s a fast and tricky track, and when you have a good car, it’s really fun to drive there and make moves compared to small race tracks.”

The 2021 season is quickly approaching. The unknown is whether we will have a full season of racing or a modified one similar to last year. Regardless of how things unfold, Michael Parent is more focused and ready to challenge the field in 2021.

Team Parent would like to thank the following sponsor. Le Groupe ultra, Ultrafab, Teo Pro Car, Dig Racing Products, Swift springs, Ultratri, and finally Grinder steakhouse, for without sponsors we could not have the race program needed to win.