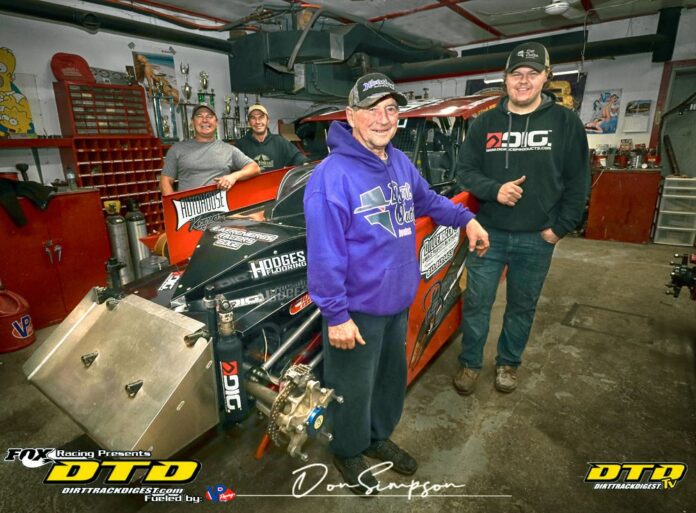 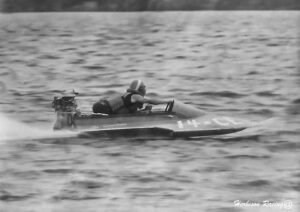 For six decades, the name Herbison has been associated with oval racing. Whether skipping over the water racing a hydroplane or challenging the field of drivers at Oswego in a Super Modified or racing a Big-Block Modified at the Autodrome Granby, there has been a Herbison behind the wheel.

Herbison Racing all started back in 1960  after George Herbison got his driver’s licence at the age of 16. From that moment on he was drawn to racing and began racing his car at the local drag strip, Mohawk Dragway. George however, was quickly drawn to a more dangerous sport of hydroplane racing. 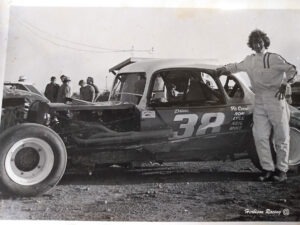 In early 1961 George bought an outboard hydro and began racing. George recalls traveling throughout the Northeast following the APBA/CBF boat racing circuit with his teammate Gord McCready. The two friends would keep racing their boats until 1967 when George once again was looking for more of a challenge and heard about a new race track being built a mere 13 minutes away from home. That track would turn out to be the Brockville Ontario Speedway.

The year was 1969 and George made his debut racing on dirt at the newly opened Brockville Ontario Speedway. For George, the days of racing on the water were over and for the next 24 years, George would race on clay and asphalt. 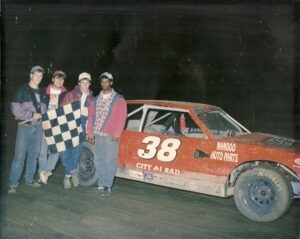 Those early years at the Brockville Ontario Speedway from 1969 to 1973 would define George behind the wheel in many ways. But raising his family would put racing aside after the 1973 season, as family and running the family business became his main focus.

Things, however, would change in an unusual way for George and his racing in late 1976. George’s wife Virginia heard about a contest on the radio, which offered up somewhere around $3,500 in prize money to the winner. She entered the contest and won. With some of that money and some other wheeling and dealings, George was back on the track racing, this time with a Tobias Race chassis. 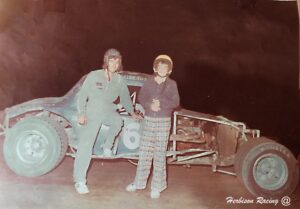 With a new chassis, body, and powerplant under the hood, the cars were then loaded on the trailer. That first race of the 1977 season for George was at Can-Am, which in those days was a much bigger track than today’s version. That first race back, however, did not end on a good note as George had a spectacular crash down the front straight with the car, ending up close to the old highway 411. George nevertheless was back racing the following weekend, after a week of repairs.

By 1981, George had once again put racing aside as the family and running the business took priority.

After a few years off racing, George was once again back in after buying a car off Scott Amell and would race on and off at the Brockville and Cornwall Speedways over the 1987-1988 seasons. 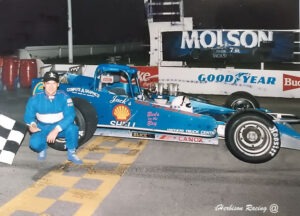 All through these early years of racing George passed on his love for racing to his two boys, Chris and Doug Herbison, who were now helping their dad around the shop and at the dirt track. His son, Doug, however, was more interested in asphalt racing at the time and began helping Super Modified driver Randy Ritskes. George became interested in this type of racing as well. Therefore, in 1991. George bought the Super Modified off of Randy and began racing weekly at Oswego Speedway.

For the next three seasons, George with the help of his boys was racing in the Super Modified class, but by 1993, racing for George came to an end due to the cost at that time. That year would be that last time George raced in competition; by then his two sons Chris and Doug were getting into the racing game.

This time his son Chris wanted to go racing so in 1994 Chris built a Street Stock, racing it weekly at Cornwall, Brockville, Edelweiss, and Frogtown Speedways. In just three seasons, Chris won 15 feature races along with 4 track championships. This was the beginning of Chris’s racing career.

Twenty-seven years later, Chris is preparing his car for the upcoming season, but this time he will be campaigning his car. But for the last 27 years, Chris has been given quite a variety of racing opportunities. From wheedling a Big-Block Modified at the Autodrome Granby for the R70 team in the late 90s to racing in the Bush North Series for several races in 2004.

The one moment, however, Chris savers the most out of all the years in racing came in 2000 when Chris was racing the family-owned Modified at Frogtown Speedway (Mohawk). Chris battled his way from the 22nd starting position to race his way through the field to win the feature.

Chris said, “It was that one moment that just sticks with you. It was an awesome day, and it still gives me that wow moment today. We owned our car. It was pretty awesome because we never thought we would win our first race there in that fashion. The race just went, really good for us, as I just kept passing car after car. It was shocking for me at the time.” 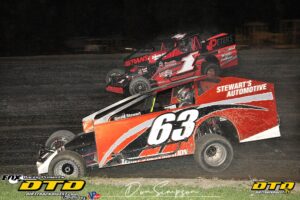 While Chris was off racing, Doug Herbison was busy himself helping out at the USAC Teams like Ron Mucci and Skip Matczak. In 2004, Doug started racing for himself in the Modified division at the Brockville Ontario Speedway. Often Doug would race against his brother Chris, as the two always tried to outrace one another.

In 2007 Doug was once again getting his feet wet behind the wheel of his 358 Modified in his number 138 Car. There was a family rival that naturally formed. After the 2007 season, however, Doug would hang up the helmet and revert to crewing on various teams. In the last few seasons, Doug was a fixture of the Matt Billings Team helping as a crew member. 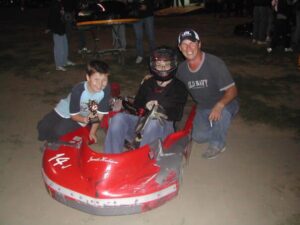 In 2008, Chris’s son, Jarrett, started racing Karts at the Brockville Ontario Speedway while Chris was racing for Stewart Racing in the Sportsman division. The family racing went through all the championship years 2011 through to 2016, all the while Jarrett was honing his skills at the Kart track.

By 2016, Jarrett was itching to move up so Jarrett and Chris bought a used car and built it up as Jarrett’s first Sportsman car, which carried his grandfather’s number 38 on it. To this day Jarrett is still carrying the number 38 on the side of his car 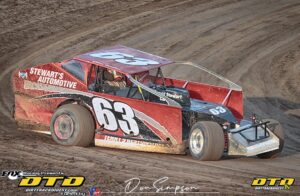 For the next several years, 2016 on  Chris would be behind the wheel of the number 63, the 358 Modified Stewart’s Racing Team car while Jarrett raced the family Sportsman. At the same time, Chris’s youngest son Jacob was racing in the Kart ranks at Brockville Ontario Speedway. Jacob would win the Brockville kart nationals twice over this time carrying on the family history in racing

At the end of the 2020 season, Chris announced after racing for Stewart Motor Sports for many years, he will be back in 2021 racing under the HR Motorsports banner. It will be the first time in 15 years that the family-backed race team will be racing their car. The car will be sponsored by Steve Polite Sand & Gravel and Herbison Tree Service, with more sponsors to come. Chris explains: “I am looking forward to the season. We have a great partner with Steve Polite Sand and Gravel and I hope to continue our success, hopefully getting the 63 back to its winning ways. 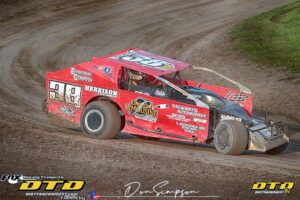 As for Jarrett, there is exciting news in his stable as Jarrett will be joining the 358 Modified racks for six races over the 2021 season with help from Bandit Motorsports. This will give the young up-and-coming driver a chance to cut his teeth in one of the toughest divisions. Jarrett will also be campaigning his Sportsman Modified as in past seasons. Jarrett explains: “Going into this season, I’d just like to keep the ball rolling. We took some big strides last year and feel we’ve made improvements in the off-season to help the car. As for the mod, I’m excited to just get out there and get some seat time! A lot of drivers I grew up watching are still in the division and I think it will be cool to race against them! Especially the old man in the 63!”

2021 will be an exciting season for Team Herbison, but with the potential of Jarrett to race heads up against his dad Chris, this will be the highlight of what the feature might hold for Team Herbison.