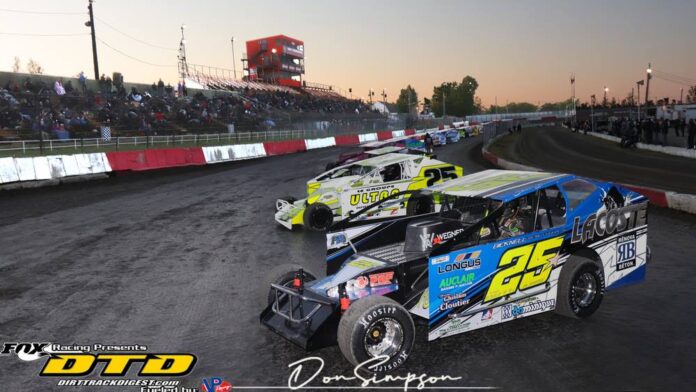 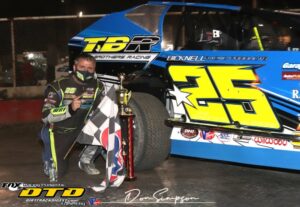 The season is off and running with a bang at the Autodrome Granby. We saw old rivalries continue and new ones, but the best part of the show was seeing fans in the stands, which made all who attended feel that things were back to some sort of normalcy — a nice way to start the season.

Like years gone by, the start of the 2021 season saw the resumption of the battle for number one in the DIRTcar 358-Modified  division at the Autodrome between Team One and TBR Racing. Night one of the doubleheaders saw Steve Bernier outgun David Herbert and teammate Mario Clair to win the first event of the season. However, the second night was a different story. Steve “the cowboy” Bernard laid his gauntlet down to show his presence early in this season. It was clear that Bernard was the man to beat on night two, but David Herbert put a last-minute charge coming up short in second place. Herbert overall had a good weekend and walks away from the event in the lead for the points 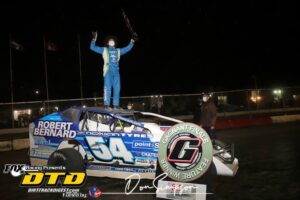 There were some new players in the mix both nights sending a shot across the bow of Team One and TBR Racing, that they to will be in this years hunt for the championship.

Alan and brother Alex Therrien both had a good weekend of racing. Alan raced his way to the podium on night two while brother Alex smashed the field in his qualifying racing night one.

Alan Therrien said, “It was an awesome weekend for us. It’s like à victory for our small budget team. Yes, I know people will say, ‘well you have 2 Bicknell cars, an awesome race hauler.’ That’s true, but all of this comes from our important sponsor! The hardest part for us is to keep the wheels turning during the season with a small budget. For example, we often buy used tires from other teams along with other used parts. That’s how I keep things going on a small budget. 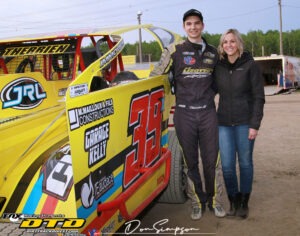 “So, for us, this is why we so happy about this last weekend run against all the big names at Granby. The fact is that the last time we were regular at Granby was in 2012. Since that time, we have usually run only two or three times per year. So really, we are the invader now. Our intention this season is to run at Autodrome Granby for the next several weeks ’til the middle of June and if things continue to go well, we will see after that. We will be running Drummond or RPM as well. This schedule is for myself and brother Alex. My dad Clement might also race his car from time to time depending on how things are going.” 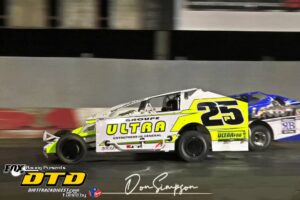 Another driver who showed his presence even more so was Michael Parent, who had an amazing start to the 2021 season. He finished fourth in both feature races along with two second-place finishes in each of his heat races which clear puts him the points chase early on.

If things continue like rounds one and two have of the 358-championship chase, this will be one of the most competitive fields of drivers in some time. 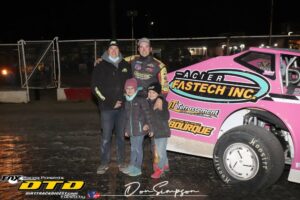 Over in the Sportsman Modified division, it’s much the same, but with the 2020 Sportsman track champion Evan Racine vacating his presence for the 358 division, the door is wide open for anyone to enter the fray. No one showed any dominance ,which clearly signifies how tough this field of drivers is this season.

Cédric Gauvreau took the win on night one of the weekend while Félix Roy raced his way to the winner’s circle in night two. The fact is Samuel Charland, William Racine, Alexandre Salvas, Alex Lajoie, Moise Pagé and Félix Murray were all in the game and things could have played out very differently from any of theses drivers. This being said Cédric Gauvreau leaves the weekend with a slight lead in points after picking up a win and a fourth-place finish, but this is only the beginning of the season and I am sure the other teams in the mix will answer the call during the next round.

In the Pro Stock division, Yves Hamel Hamel picked things up from where he left off last season. Yves, Mr. Consistent, finished in third-place on night one of the season opener, along with a win on night two. Hamel has set the bar high for round three and leads the pack in points, but the 2019 track champion Dany Voghel may have something to say in the next round as Voghel himself was on his game all weekend but had avoiding the trouble on the track not once but twice, clearly slowing him down. Voghel, however, picked up two fourth-place finishes, putting him in second in points after the first two rounds. He will undoubtedly race even harder in round 3. Bruno Richard picked up the win on night one but got caught up in the big crash on night two. Pascal Payer who finished second on night one was also taken out during the crash on night two. Payer, however, is one driver who is very fast and will be one to watch in round three. The sleeper in the class and will be one to watch as the season unfolds is Gabriel Caouette. Caouette walked away from the weekend with a second-place along with a fifth-place finish.

Finally, we come to what I think is the most competitive class at the Autodrome and that is the Sport Compact. This weekend Danick “Superman” Sylvestre came to the track to win and he did. Sylvestre parked the car in victory lane both nights and raised the bar high for the rest of the field. Most of the drivers were struggling with various problems on their cars which makes you question if the teams were ready for the season considering the pandemic woes plaguing the reigns in Quebec. Sylvestre is now the man to beat. I asked Danick about his plans for the season along with his results.

Danick commentated, “We came to the track this season to win and we did. We have a good car this year, and we plan to keep up the pressure and be consistent all year. Our goal is to win the championship at all costs as we have a plan. If things go our way this season, we will be making a move up in class, one we have had our eyes on for some time.”

Alexis Charbonneau, the 2020 track champion, had an off start to the season with only a second-place finish on night two, but Charbonneau is one driver you never count-out. He is always one of the top runners and will be in the mix this season. Sebastien Beauregard picked up two 3third-place finishes, also one to watch. Jean Guay, normally a top runner, was plagued all weekend with motor problems, but once things get sorted, he will be back in the game.

Both nights of racing had their share of crashes in the 358 Sportsman Modified and Pro Stock divisions but Trois Rivieres Francois Belmare suffered a broken hand in the first of two crashes he was involved in. The second crashed for Belmar happened after a tire blow.

Francois said, “Going down the front straight, my left rear tire blew out entering turn one, sending the car into the outside concrete wall on lap 59. It was disappointing as the car was getting stronger at the end. The car has had rear-end damage. As of now, we are not sure about the next race. There is a lot to fix on both cars and the bad news is, from Friday’s crash, I received a broken bone in my left hand and this will for sure slow the repairs down.”

Another spectacular crash that could have been much worse if it were not for the quick response to the situation by Mathieu Boisvert, happened as he was going down the back straight at full speed.

Mathieu commented, “The throttle stuck open as I was running the outside going down the back straight. I noticed that I could not back off on speed so I did the best I could to steer as the wall came fast. I then braced for impact. It was very disappointing as I had a decent start to the season. This is a big setback for us, as we are a small team this season and I am not sure when we will be ready next. We will have a team meeting to assess the damage and see how we will move forward.

The surprise of the weekend, however, came from the two young lions in the Sportsman Modified race. Cédric Gauvreau and Samuel Charland put on a show that was unmatched in any other division. The two drivers raced lap after lap, side by side, bringing fans to the edge of their seats. Even drivers in the pits were glued to the track as these two raced their hearts out for the win. Cédric Gauvreau certainly eared this win in fashion.