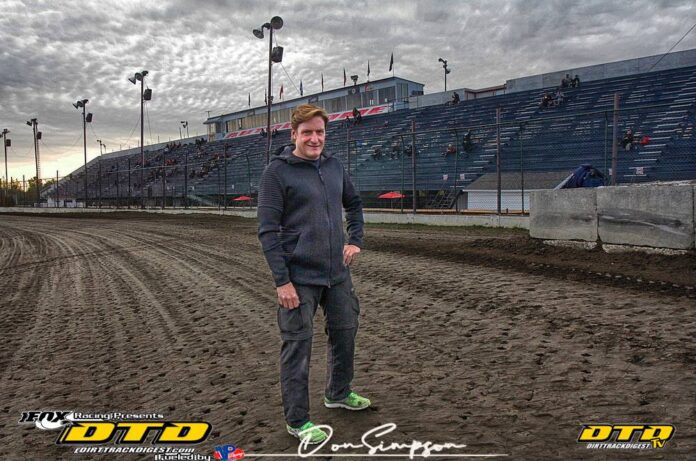 This past weekend saw the start of the 70th season of racing at the Autodrome Drummond and it started off in typical Yan Bussiere style, There was however a slight hiccup in the fact that health officials refused to allow victory lane celebrations, which was disappointing, but Yan pressed on.

The season opener was captured by Saint-Hyacinth Quebec’s Francois Bernier in the 358 division while in the Sportsman Modified division Felix Murray came home with the win.

It wasn’t the grand opening to the season that Yan has visioned but never the less the celebration has begun. 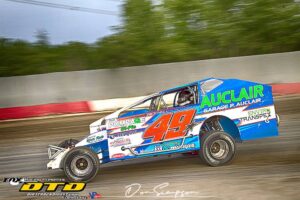 70 years of racing, that’s quite an achievement if you think of it. There is only a hand full of tracks that can hang this plaque on the wall that is still operating. This year Autodrome Drummond will join this very special group that includes Merrittville Speedway and Five Mile Point just to mention a few.

This year’s grand opening of the 70th year of racing was on Saturday, June 5th, and in typical Yan Bussiere fashion, he delivered a great show. 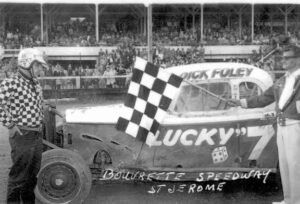 This story however began in 1951, with Gilles Dutily becoming 1951 Modified Champion and times were good after the war years as the economy was booming. These were called the boom years from 1950 to the mid-’70s, and during these times Race tracks were popping up all across the northeast of the United States and Canada.

The Laplante family saw the potential back then and made the move to bring racing to the village of Drummond and opened the speedway in the summer of 1951and so it began. 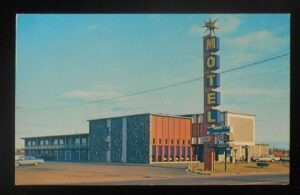 The family Laplante built the speedway just at the edge of town on Bernard Boulevard. In later years the old Daughny hotel was built in front of the speedway, which became a classic landmark.

As the village of Drummond grew, putting pressure on the track. It was eventually sold and later move further out of town as the city was growing. This time Gilles Lacroix and Marshall Granit constructed the track at 1155 Boulevard Saint-Joseph, where it stands to this day. Gilles Lacroix and Marshall Granit would keep the track going for 8 years until they sold it to Jacques Lambert.

The Lambert family would own the track from 1978 till 1998 some 20 years. These were the best years as racing of any kind was very popular throughout North America. Racing was a family pastime during that period where Mom Dad and the kids would be off to the races on a Friday or Saturday night to watch the ever-growing numbers of drivers as racing was the in thing back then. As time went on however and the 80s faded into the 90s racing began a slow decline in popularity as people found other interests and hobbies. This was felt likewise at the Autodrome so in 1998 the Lambert family sold the track to Gilles Boisvert.

Gilles Boisvert, the father of 358 Modifoed driver Alain Boisvert. However, after only one season of racing, Gilles sold the track to Jacques Constant / Alain Poirier in late 2000 and they continue to run the track to this day. 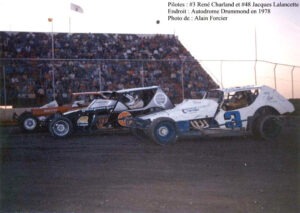 70 years of racing at the Autodrome Drummond have solidified dirt track racing in Quebec. This track over the years attracted the best drivers. In 1953, the Foley brothers made their debut as drivers at the Drummond Speedway. Then there are drivers like Jake Johnson, Brett Hearn, Danny Johson to the greatest sprint car driver of all times Steve Kinser, who have all raced over the clay at Drummond.

Then there are the local heroes like Brouillard, Roy, Lafrance, and Lalancette, but there is one family that is synonymous with the Autodrome Drummond and that name is Cair. 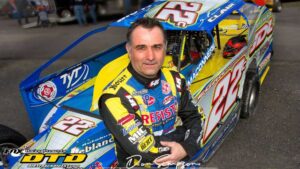 There has been a member of the Clair family racing at the historic track for over 60 years. This story began with Mario growing up in a household involved in dirt track racing as his father, Rene Clair, raced within that sport for over 60 years. Mario, along with his brother Gino, helped with their father’s racing adventures for many years as they were growing up. It was a family passion, working hard during the week and then packing up the family to hit the track at Drummondville on the weekends. Mario will continue this family tradition for the 70 celebration years at the Autodrome campaigning his signature number 22 car.

We come to today 70 years in the making and promotor Yan Bussiere has worked tirelessly over the past two years to ring in this season with all the revel that Yan can bring to a show. The disappointment however is the fact that the COVID pandemic has once again come into play as it did last season in 2021. Things are slowly opening up and there is light at the end of the tunnel, but the planned opener may be delayed as health officials are clarifying rules. Regardless Yan will work his magic and get the season underway, it may not go 100% as planned, but when it does it will be a night to remember.

The opening show will host the 358 Modifieds as the headline with a 70 lap feature race. Included this night will be the Sportsman Modifieds with their 32 lap feature in memory of Guy Ouellette. Also on the schedule will be the Lighting Sprints, STR, and on the small track will be the Slingshot. A spectacular night of racing will be in store.

There some spectacular shows scheduled for this season and a first as Yan explains:” We will be having a big block showdown with drivers from Quebec and Ontario racing to win this special event “The King of the North” on July 19. The 70th anniversary will also host the Quebec Dirt Weekend September 25-26 with a feature race of 170 laps with $ 12,000 up for grabs for the 358 Modifieds. We will also have Sportsman 70 lap feature with 4,000 to win

However, this is not all for Yan as he will be challenging for the 358 Track championship in 2021 as well and will be on the track this opening night. The veteran driver would love nothing more than to bring home the title at his track has been racing in the 358 division for close to two decades with over 650 starts and over 30 wins career wins.

Yan explained, “This season is very important to me as I only have about 2 seasons left in modified with my equipment. After this, I will race in midget STR full time. For now, however, I am racing in both classes this season. My objective is to be a champion in Granby. I finished a close second in 2007 but never crowned and would love nothing better to reach my goal. As for Drummond, I am striving to be in the Top 3 in the championship points.”

This coming Saturday, June 5th t the 70th season will finally get underway. This will be a spectacular year for the 70th anniversary season with some limits.

Yan went on to explain, “Unfortunately, with the borders being closed, we will miss having the ESS Sprint Car series along with the Super Dirt Car series which will surely be missed by fans and these were going to be a big part of our show, but we will make the best of it and celebrate in true Quebec fashion.