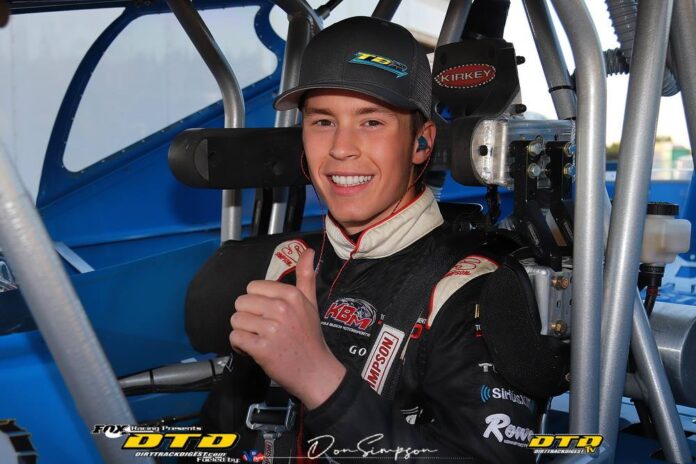 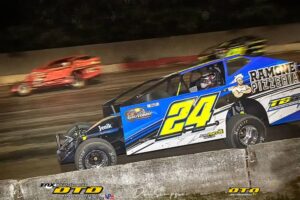 NASCAR Camping World Truck Series driver Raphael Lessard made his debut behind the wheel of the number 24 TBR Racing prepared car this past weekend. Lessard kept things in focus along with a realistic race plan, which in the end paid off for the 19-year-old driver. Lessard finished twenty-second out of the 33 cars.

Raphael explained, “It was a really good experience for me. Yes, I would have liked to move up more in the field but, it was a clean race and I got through the 40 laps without any incidents and learned a lot throughout the evening.”

Francois would then join forces with Dominic Lussier to give this project even greater resources on moving the idea forward. 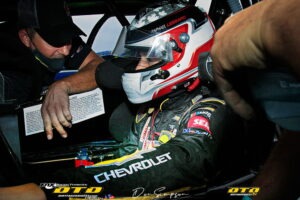 Dominic said, “I met Raphael in 2019 and could see even then the talent this young driver has. These past weeks working with Raphael, you can see how intent he is on learning. Raphael just has a way about himself that he is more mature than his age. He is always open to new ideas. For me it was a pleasure to come onboard with Francois, to move this young driver’s career forward in racing.”

Raphael’s support team began researching the Saint-Hyacinthe shop and soon realized that TBR Racing has produced a well-recognized product and that the team at TBR could supply the young Quebec driver with a winning car.

As the talks continued, Francois emphasized that going racing on clay would benefit both groups and that Raphael could get greater exposure within the racing world, all the while expanding his racing knowledge and skills. 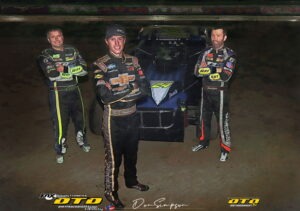 The two groups hammered out an agreement for Raphael to race five events all to be at the Autodrome Granby. With this agreement, the Lussier Chevrolet Buick GMC dealership in Saint-Hyacinthe also came on board as a supporting sponsor.

With the agreement in place, TBR Racing began transforming one of their 2021 358 Modified for Raphael, who on June 13, visited the Saint-Hyacinthe race shop to adjust the seat arrangement within the car.

Lessard will take over the transformed Steve Bernier car which will carry the number 24. In the meantime, TBR Racing will build a new car for Steve, allowing him to continue with his racing season.

Lessard would hit the track at Autodrome Granby on June 25 for his first race in a 358 Modified, which in many respects is a very different beast to drive compared to his previous rides.

Raphael commented, “I’m very excited to be getting behind the wheel of my new car with team TBR Racing. Recently I visited the TBR shop and had my seat fitted for me. We then discussed some of the aspects of racing at Granby in a Modified. I have some experience on dirt as I raced at Bristol Motor Speedway a few weeks back which was an awesome experience. I raced Micro Sprints on dirt in the past as well. I am super pumped to get back racing on dirt and with the help from Francois and Steve over at TBR, I am hoping this will be a good experience. So far, it’s been great working with them.” 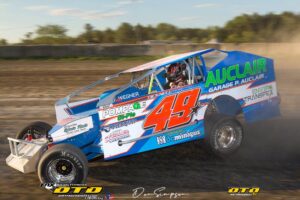 With things unfolding fast, the process over at TBR Racing was at a feverish pace as two cars were being transformed to racing form. A testing session was then set for Le RPM Speedway on June 23. This would be the first time that Raphael got behind the wheel of his new 358 Modified.

The testing started slowly with Raphael getting the feel for the car. After a few laps, he picked up the pace, putting in about ten laps before coming to discuss the feel of the car. Francois Bernier then took the car out, which helped the small crew make the adjustments needed for this small hairpin track. In all Raphael put about 50 laps under his belt and was very excited about the night.

Raphael said, “I had a blast; this was a very productive night and I definitely got the feel of the car. The only thing I will have to do is fine-tune my driving to get the car around the track faster, as a dirt track is a different beast over asphalt.”

Overall, it was a good night for both Raphael and Francois Bernier of TBR Racing.

Francois stated,” I was really impressed by Raphael’s adaptability. It’s promising for the Friday race at Granby. I believe that the fact that he has already raced in NASCAR and that he is used to communicating the reaction of a race car will help us to make the right adjustments for the race. He is pumped up and ready to face the others on the track.”

The weeks of preparation finally came down to race night. Lessard arrived at the track early, calm and excited, but at the same time knowing the challenge ahead.

“I am very excited it is finally race night and I’m looking forward to getting behind the wheel. It will be tough, I know this, but if I can race clean and hopefully move up through the field and finish, I will be happy,” Raphael explained.

A realistic goal for the young driver. 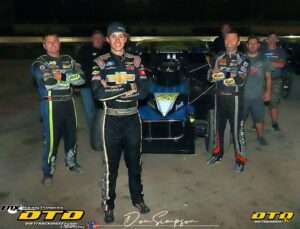 The race unfolded as planned with a good hot lap session along with a heat race. Both Francois and Steve Bernier prepared their young apprentice for the Feature event, explaining the best lines to tack during this 40-lap race.

It was a hard race. Forty laps around Autodrome Granby is tough for the most experienced drivers as it is a very technical track.

Lessard, however, drove clean and stayed clear of trouble. Yes, it was clear he was working hard to learn the race line around the track. Regardless of the obstacles, Raphael Lessard finished twenty-second.

At the end of the day, Raphael got the learning experience he desperately wanted.

As for the man who started this ball rolling, Francois Bernier was happy with the night’s results. Francois explains: “It was a good race for Raphael. I think he learned a lot tonight. I think moving forward once he gets his confidence in the car; he will do very well. We at TBR Racing are looking forward to what the future might bring Raphael Lessard and I am very excited for what this project might bring.”

All in all, it was a winning night for everyone involved. The team’s hard work these past days paid off. There are still four more events for Raphael in the coming weeks, but with such a good working relationship between TBR Racing and Raphael, plus the involvement of Dominic Lussier, the future of this adventure maybe even brighter.