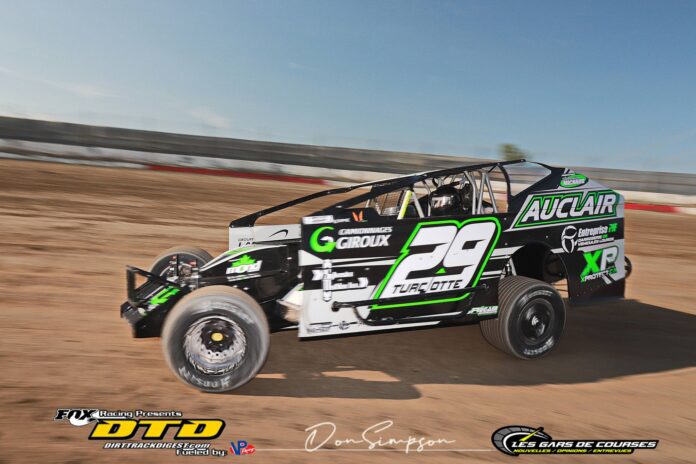 Team Auclair is a young team compared to many in the world of dirt track racing, but in recent times, the team has been proving they can run with the best in the Sportsman division.

Steve Turcotte, the team’s number one driver, is currently on top of his game and is second in the points battle, just five points from the leader William Racine at the home track in Granby.

This season, the team finds itself in the battle for the 2021 track championship at the Autodrome Granby. Team owner, Philippe Imbeault, is thrilled about the possibility of bringing home the title.

Philippe explained, “I am so excited about this season as all the hard work is paying off. A few years ago, I would never have imagined this, and look where we are in the points battle fighting for a championship. ”

To understand this excitement, you have to go back to 2016, as the thought of racing was just a whimsical idea. This all came about while Philippe and his best friend Steve Turcotte, who is also the team leader at Philippe’s shop — Garage P. Auclair Inc. – were enjoying an evening of racing at the Autodrome Granby. Philippe suggested to Steve that he would like to get him back into racing.

“In 2016, this was the first time for Philippe at a big-block race. After a few beers, Philippe said to me, ‘Hey, Steve, that looks fun. What do you think if we buy a Sportsman for next year? My answer was, are you crazy! It’s a lot of work and money and we don’t know anything about those cars. In my mind, it was only one of those spur-of-the-moment ideas you say and don’t remember the next day. But he was serious! So the research for a Sportsman began. We bought one of Alex Lajoie’s cars at the end of the 2016 season and started racing in 2017. Here we are today with a good race program fighting for the championship.” 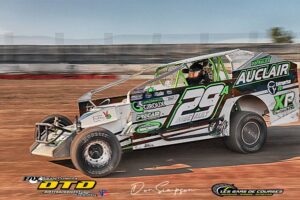 This, however, isn’t all for Team Auclair as Aryanne Imbeault, Philippe’s daughter who joined the Sportsman ranks at the end of the 2020 season, is the team’s second tear driver. She too is battling for the Rookie Sportsman driver of the year.

This past weekend, Aryanne won her first-ever heat race over a top field of drivers, something she had been striving for on her journey as a driver.

“It’s all about steps in the process of learning to become a good driver,” Aryanne explained earlier this season. She has now achieved some of those goals. There is more to this story, however, as the team added another driver to their roster this season.

Sean Imbeault, Philippe’s son, is the newest driver who has been doing some testing at the Autodrome Granby and Drummond. Sean is primarily racing at Drummond and, like his sister Aryanne, is taking in the racing experience a step at a time.

Sean stated, “I practiced this year at Granby and loved it so much, but for me, I will be racing Drummond as it is a great place to hone my racing skills before moving on to the big track at Granby. I would like to give a shout-out to my teammate Steve for all his help along with Michael Richard and Frederic Gamelin and his girlfriend, Joanne Poirier, for all they do to help our team!” 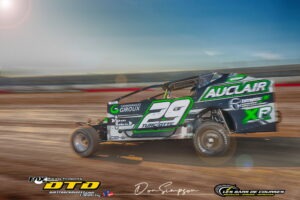 It has been an incredible year so far for the team, but with all the joy and jubilance, there were some starling moments of reality on just how dangerous racing can be.

As explained earlier, Aryanne had won her first heat race, but some 24 hours later, Aryanne was involved in a big crash at the Autodrome Drummond fighting for position.

Aryanne, shaken by the incident, walked away with just some minor injuries. Still, this was a reality check on just how quickly things can go from good to bad in racing. Philippe, Aryanne’s dad, was affected, but at the same time confident in her well-being knowing how well built these cars are..

Philippe said, “Honestly, when I lost my father the year Aryanne was born, 18 years ago, my outlook on life changed. I tell myself that when our days arrive, we can’t change anything. Yes, it’s always a heartache to see one of your children involved in an accident! We are so lucky that the cars are built with safety in mind. Then there is the fact that the tracks are well organized with fire, ambulance, and safety crew. All this in mind, reassured me things would be o.k. Currently, we are reassembling the car that we had to buy for Aryane because the other is a total loss.”

As the team prepares for the second half of the season, it is a busy time at the shop for all. The plan is the same going ahead. Race hard and clean, finish the race as high up in the points as possible, and remain focused on the championship.