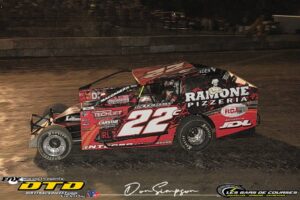 The Cornwall Motor Speedway will see the second round of the Fat Les’s Chip Stand Canadian Nationals unleashed on August 1 with $3,000 up for grabs.

Round one of the series saw Mario Clair battle past the lead pack of drivers on lap 19 to race his way to victory lane in classic Clair style. Corey Wheeler crossed the line in second, fending off the hard-charging Johnny Jackson in third.

The Canadian Nationals is the most prestigious series for the 358 Modified in the country. With only 20 points separating the top five drivers going into Sunday’s race, each of these drivers will be laying on the line in hopes of walking away from this event with a decisive lead-in point. 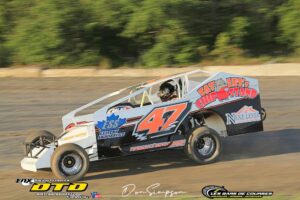 Corey Wheeler, the current Canadian Nationals Champion, is in second place just three points behind leader Clair. Louie Jackson Jr., is 12 points behind, followed by Yan Bussiere 13 back, while Kevin Hamel is 20 points back of the lead.

Wheeler is a charger and will race hard for the win. Corey was in this very same position for the last Canadian Nationals Championship battle and managed to pull off the victory in the end.

The one driver out of this top group of drivers who is underestimated is Kevin Hamel. 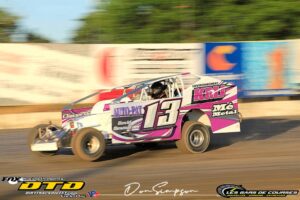 Hamel brings with him top-notch driver skills along with a family honed engine program and has pulled off some superb finishes in the past. Kevin just might be the dark horse in this group of drivers.

This is the oldest Canadian series for the 358 Modifieds and has seen the best in the sport from across North America challenge for the championship title.

This year’s version of the Canadian Nationals is in its 10th season and has already shown to be an exciting one.  Whoever will come out on top of this Sunday race is anyone’s guess. 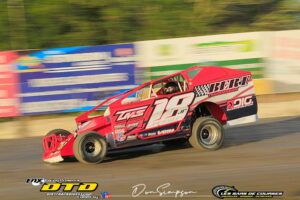 Once again the series will be sponsored by long-time supporter Les Winters of Fat Les’s Chip Stand.

Track owner Raymond Lavergne is grateful for all the support Les has brought to the speedway over the years including this season.

Raymond explained, “   We are always thankful to have Les Winters onboard sponsoring our biggest series of the season. This year, it’s even better as fans are back in the stands and things are getting ever so close to being back to normal at the Speedway. So far, the series has given fans some good old fashion racing for top dog and thinks should be even more exciting this coming August 1 race with more on the line for the top drivers. All in all the season is looking better than we first expected and we are now holding a full points race season for each of the main classes including, of course, the Canadian Nationals.” 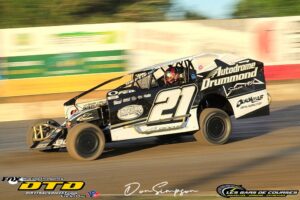 Sunday’s race may be the defining moment for some challenging this year’s championship, but the race may open doors for others to put their name in the hat for the title. Raymond and his team are reportedly in the process of securing additional sponsorship funds for this race. This could make the pot even sweeter. Keep checking the Cornwall Speedway Facebook page or website for updates.