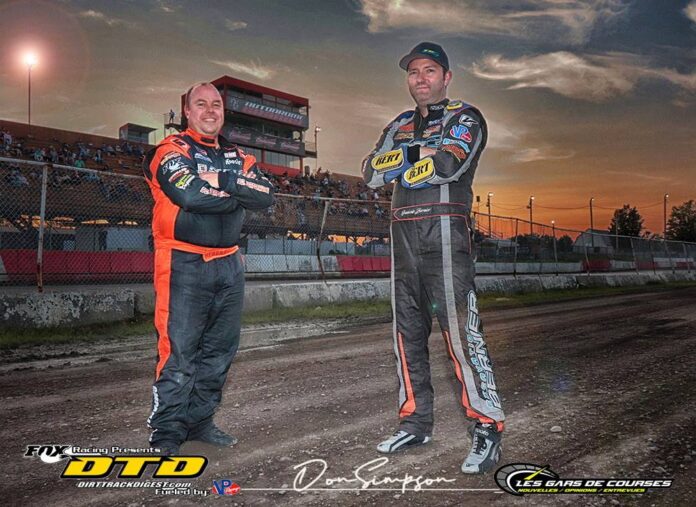 The battle between Team TBR Racing and Team ONE is once again at the forefront at Autodrome Granby. Both teams have set their sights on the championship at Granby as they have done so for many years.

Currently, Steve Bernier of TBR Racing has a slight lead in points over David Hebert, but things can change quickly in this dynamic class. 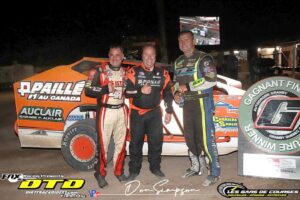 David explained, “For us, we have to be consistent for the rest of the season. At the moment, we have a good battle for the championship going with Steve Bernier . We had some bad luck during the last race on Friday as we broke the engine, but we will be back strong this week to continue the fight as the points are very close.”

Yes, we have seen this battle before between Team ONE and TBR Racing, but this epic struggle between these two great teams is even more compelling this year as each team’s second driver is also in the points fight. 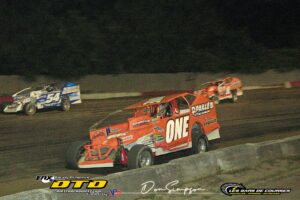 Team ONE has none other than Mario Clair, behind the wheel of their second team car. Clair won the track championship at the Autodrome, back in 2010, but has come close numerous times over the years and is always a tough contender.

While over in the TBR camp, Francois Bernier wheeling the team’s second car is currently the defending champion at the Granby track.  Francois, who has struggled this season, is racing hard to keep in touch with the two front runners and is still in the fray.

Francis said, “It is clear that the pressure is accentuating for the last sprint for the championship. On our side, we have kept the focus on the best possible result, and foresee any precious errors that could hurt our chances to win.” 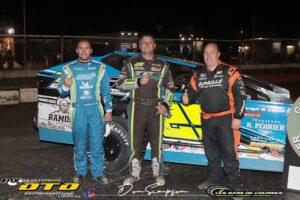 This epic clash between these two great teams has gone on for some 12 years now. Yes, Herbert had some bad luck this past Friday, but he has been in this position before and will rebound.

Herbert got his first taste of a championship at the grand old track in Granby back in 2004. Since that time, he has gone on to win a total of five championships at the Autodrome Granby along with 47 Feature wins.

Over at the TBR camp, Francois Bernier won his first championship in 2011 and has won 24 Feature races and Like Herbet has 5 championships to his name at Granby.Brother Steve Bernier has taken home the championship twice in recent years the first coming in 2018 and repeated his success in 2019.

This year, however, there is other driver in this season’s brawl for the title, who could finally end the string of dominance by these two teams. 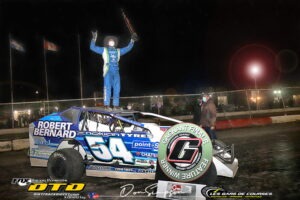 Steve Bernard has come on strong in recent weeks and is just 47 points off the leader.

Bernard is no stranger to a championship run,s as he has captured the title three times at the Autodrome Drummond and twice at Le RPM Speedway.

Team Bernard started the season with one goal in mind,  to perfect the set-up of their new chassis. However, the team now finds itself challenging for the championship.

Bernard stated, “For our team, we have had some struggles this season compared to Team ONE and David Hebert, along with Steve and Francois over at TBR. We have been working on things to get that edge needed to win at the Granby track. I think we are very close as things are looking more positive lately. We started the season not looking to challenge for a championship at Granby, but more to find the best adjustments for the car as It has been quite a challenge to switch from TEO chassis to Bicknell. Going forward, we will concentrate on what we set out to do this season, to figure out the best set-up for the car. We will of course continue to focus on getting good results, which have been looking better in these last few weeks.” 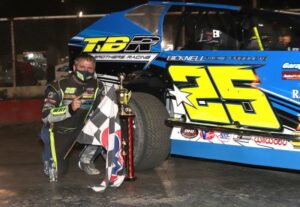 
With only 50 points separating the top five drivers, it’s still anyone’s game. Winning a championship is not about how fast you can go, but finishing the race. So far all of the top runners have had their hiccups this season. It is clear, the championship this season will boil down to who is more consistent as we move into the final stretch of the season.