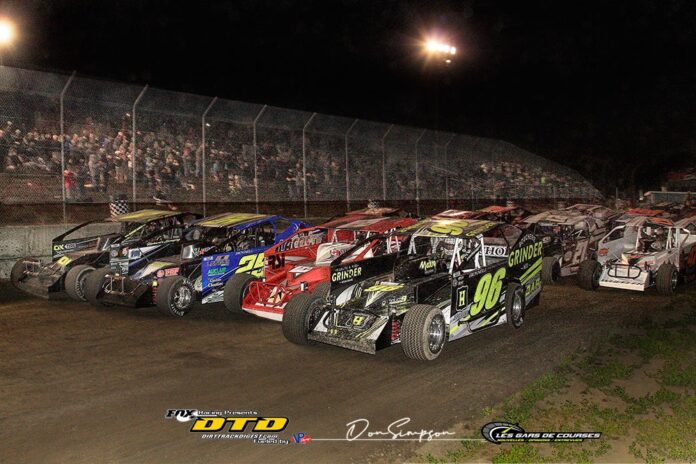 The final round of the Fat Les’s Chip Stand Canadian Nationals series will unfold as part of the Cornwall Motor Speedways Fall Showdown weekend, the largest dirt track race north of the border, with a total three-day payout of $14,500 for the 358 Modified. With this news to date there are over 45 teams have put their sight on attending this event. 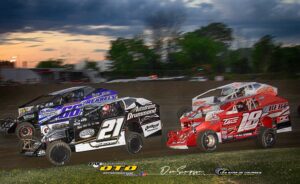 Sunday, October 10, will see the top challengers fight it out over a grueling 125 laps for the crowning of this season’s champion.

Defending series champion Corey Wheeler is sighting just six points off current series leader Yan Bussiere, who is itching to dethrone Wheeler of his title. Even though the points battle is close, Corey is not backing away from the challenge.

Corey said, “I’m just super excited that Cornell is having a three-day event again. It was so much fun last year. I think we’re lucky Raymond puts on his big shows for us. As for the race itself, we are just going to go into the final round with no pressure, have some fun, and hope for a good finish.”

Over in team No. 21, Yan Bussiere, the current points leader, has had some great results in the latter part of the season, including a big win at his hometown track at Drummond. Yan is confident he can carry on this momentum going into the Fall Showdown weekend. 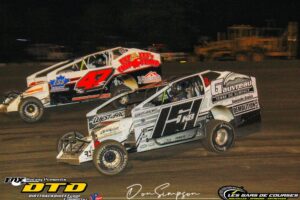 Yan explained, “For National’s Canadian, this is my first and only goal of the weekend to win this championship. My new set up for our car this past month has given us some very good results. With this, I should be able to win this classic. Of course, I need a bit of luck too, as the competition is very strong. I would like to thank Raymond and the Lavergne family for allowing us a great three-day race weekend. It is very risky at this time of year.”

This however is just one of the points battles that will unfold that night as there are only 22 points separating the top five in the series.

Luke Whitteker, who is currently tied for second in points with Yan, is a former series champion and has been running strong this season. Luke who is good when it comes to playing the end game, comes on stronger as the race nears the end and will be the one to watch. But like anything in this sport, a bit of luck will have to come into play. Luke explains the game plan for the final key races,

“For these last five Fall races, preparation is key. Since the last race at Cornwall, we have been working hard in the shop preparing the car. Everything has to be gone over with a fine-tooth comb. The regular season puts a beating on the car and its components. In the meantime, I’ve been racing the 124 Dagenais car to maintain seat time. With the competition so tight, there are no guarantees, but we are always focused and driven to win the race on any given night.” 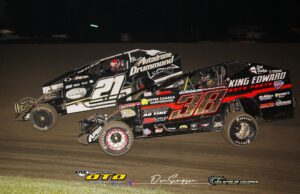 Brian Mc Donald also a former winner of the series will bring his A-game to the track that night. McDonald recently raced his way to victory lane during the second round of the series, leading the race from start to finish. He will be one to watch for this final round.

One driver who can never be underestimated as well is Kyle Dingwall who came inch of taking the track championships both at Cornwall and Brockville this season and is still very much in the running,

It’s anyone’s game to win, but the real stick in the spokes that will come into play is the added drivers to the roster who are not in the points chance, but who are looking at taking home the $10,000 up for grabs for the Fat Les’s Chip Stand Canadian Nationals Final.

The Fat Les’s Chip Stand Canadian Nationals will close out what has been a banner year for the Cornwall Speedway, considering the challenges with COVID. To have this one event as part of the Fall Showdown Weekend makes it even more special.

Track owner Raymond Lavergne said, “We wanted to end the season on a high note, so we decided to hold three days, shall we say, of celebration for the racers, with camping primarily reserved for the teams so they could enjoy the weekend as one big family. We came up with the Fall Showdown Weekend cap off with the Canadian Nationals series being the biggest event with $10 grand on the line. Yes, it’s a big risk three days of racing as the weather at this time of the year can be unpredictable, but this will be a great show for both fans and racers. We are very grateful to our sponsors of course. Without them, this great weekend of racing could not happen. I would like to thank St. Lawrence Radiology, King Edwards Auto Parts, Dirt Outlaw Apparel, Gauvreau Transport, Carriere Sablière Dagenais, Co-op Embrun, and finally Fat Les’s Chip Stand who were on board with the idea from the beginning.”

The Fat Les’s Chip. Stand Canadian Nationals like in past years will give fans and racers alike the show of the season at Cornwall and, with this combined into the Fall Showdown Weekend what a way to cap off the season at the Cornwall Motor Speedway.