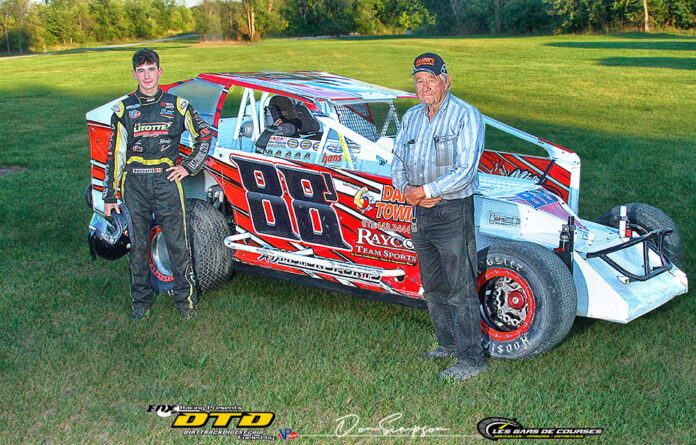 2021 was a dream season for, Justin Cyr, the 16-year-old driver, who made the leap from Kart racing to the Novice Sportsman division. 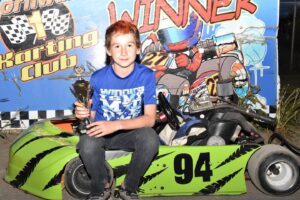 This story began when Justin caught the eye of Al Dickie back in the summer of 2020 at the Cornwall Motor Speedways Kart track as the young racer was turning heads with his driving skills. Justin, who has won four Kart track championships over the years, raced Karts for eight years, but this season, stepped up into the Novice Sportsman ranks with the help of car owner Al Dickie. Al, who has been around racing for decades, was inspired by Justin’s eagerness to race and learn.

That said, the team was born and the hunt was on for a race car. The team then acquired a car from 358 Modified racer Alex Therrien, spending the winter months building up the car for the season ahead. 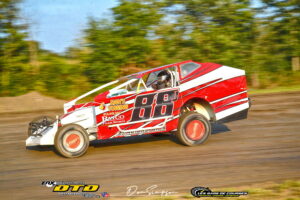 Justin would be racing in the Novice Sportsman division both at Cornwall and Brockville Speedways.


The first race of the 2021 season saw the rookie driver a bit cautious on the 1/4-mile dirt track at Cornwall Motor Speedway, but still managed to get a podium finish coming in third. A few weeks later, Justin’s first race at the Brockville Ontario Speedway saw the graduate from the Karting ranks dominate the 15-lap feature event, taking the lead from the drop of the green flag, never looking back and winning his first race of the season.

The following weekend this young hard charger from Cornwall won the feature event at his home track in Cornwall. This success continued to unfold as the season progressed 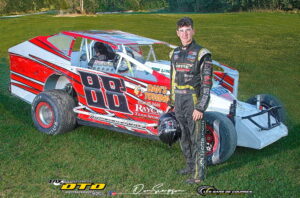 For Justin, this move up in division put his points for the championship in the Rookie Sportsman class in jeopardy, but this would be the price he wished to give up to compete in a higher level of competition.

Justin explained, “It was a big decision, but I wanted to learn with the big guys. So next year, I would transition well, as it’s a much higher level.” 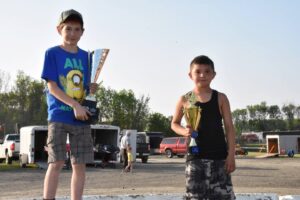 This streak of top finishes would continue throughout the regular season. Justin brought home 11 podium finishes, eight of which were feature wins.

The highlight of the season though was bringing home the track championship at the Brockville Ontario Speedway. With seven podium finishes, five of which were feature wins, Justin has left his stamp in the history books at the BOS.

The fall racing schedule saw Justin move to the  Sportsman division for the final few races of the season, giving him a sample of what will come next season.

It was a busy few weeks of fall racing. Justin raced the Brighton Speedways Applefest, Brockville Speedways Fall Nationals, along with the Autodrome Granby. But it was his home tracks Fall Showdown weekend that tested his driving skills the most. 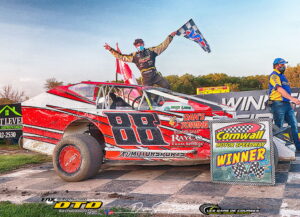 The Fall Showdown at the Cornwall Motor Speedway was by far the challenge of the year, with 66 drivers fighting for one of only 30 starting positions each night over the three days of racing. For the Race for the Cure final, Justin raced his way into the feature through his Consi, finishing seventh out of 24 cars.

The feature, however, was tough, as he only picked up a 20th place finish out of 30 cars – a good experience for the young Cornwall driver, but a disappointing result.

The script of this past season could not have been written any better for Justin,. Adele, Justin’s mom, was fortunate enough to view this story as it unfolded.

Adele said, “I can’t thank Al enough for giving Justin a big shot on having him drive for him. Al became family to all of us this past year and that will never change. Justin’s stepdad JP is the one who’s known Al for over 30 years and he spoke to Al last year explaining to him that we were looking for a car for Justin. From there, things escalated and next thing you know, the three of them made a day trip to Quebec to buy Justin’s first car off Alex Therrien.

“We created some great memories at our shop building the car with Al and, of course, this summer also. I’m very happy that my son could live his dream and, in all honesty, that’s because of Al and Justin’s stepdad. Winning a championship was not even talked about this season. We wanted Justin to enjoy himself and get all the seat time he could get, but again, that changed fast when he showed us that racing was his passion and he wanted to keep going.

“Justin would wake up every morning if not working, pull out his race car and make adjustments along the way. He was dedicated and he wanted that championship. Some nights, he had to fight hard for it. He loves the challenge. I’m a proud mom for sure. I have two very talented boys. I’m excited to see what next year will bring, but all I know is Justin will continue to drive for Al and I couldn’t be prouder.”

For next season, the team has already started to prepare to run a full season in the Sportsman Modified division, both at Cornwall and Brockville. If all goes as planned, the team is looking at racing Mohawk weekly as well. With parts on order, a second car is in the works.  2022 is shaping up to be busy for this young talented driver.