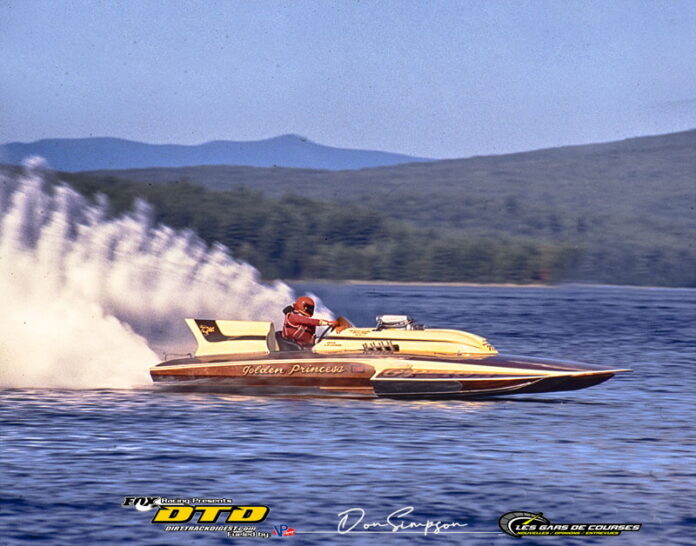 We have all seen a driver that just stood out to us because of what they could do with the machine they were racing. The driver in this story did not make his mark racing on dirt, but rather on water.  The two sports do have some things in common.

Dirt track racing from the 70s through to the mid-90s was considered by many as the best of times. Teams were plenty, race schedules were full and fans would pack into race venues to the point of overflow.

Drivers like Brett Hearn, Danny Johnson, Jumping Jack Johnson, and Pete Bicknell all have made their mark on a dirt track.

During those same times, things were much the same when it came to boat racing. Yes, this is not dirt track racing, but there are some common elements. Both race counterclockwise and both race on surfaces that can be very tough to compete on. 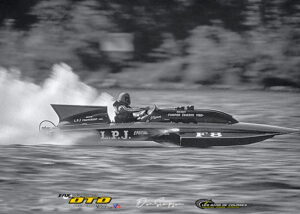 In the world of Grand Prix Hydroplanes, Lauterbach boats were legendary back in the hay days of boat racing. Drivers like Tom D’ Eath, Tommy Baker, Larry Lauterbach, Jules Leboeuf, Howie Ben’s and BobTheoret all made their mark behind the wheel of a Lauterbach boat. One driver that stood out was Jean-Pierre (J.P.) Lessard because of his sheer talent behind the wheel. Lessard’s driving style was legendary, always on the razers’ edge, while thrilling fans where ever he raced. 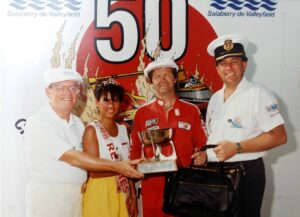 Many who have been around the sport and witnessed those glory years of racing often reminisce of days gone by, and sooner or later, the name J.P. Lessard comes up.

To drive a Grand Prix Hydroplane back then took a special breed of person, with nerves of steel. The drivers sat open-wheel, with no restraints whatsoever, reaching speeds to close to 160 miles per hour. 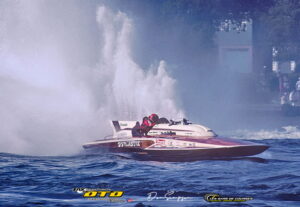 Lessard from Louiseville, Quebec, embraced the adrenaline rush and would maneuver his boat in any way to get around the competition. In many ways, that’s why he was so exciting to watch, taking chances when others were more reserved. This attribute was not always the case for J.P. as it took many years of competition to hone his racing skills to that level.

Racing for J.P. Lessard all started back in 1972 when he began to race in the 280/360 class. Late in 1978, Lessard bought one of the best boats to come out of the Lauterbach shop, Robert Cabana’s “Desourdy Special.” 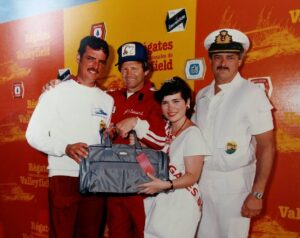 In 1979, J.P. Took control of the “Nordic” GP-25 late in the season after the tragic accident that took the life of Joe Gimbrone. At that same time, J.P. also ran his LPJ Special 5-liter boat. For the next few seasons, Lessard was doing this double-duty, but his first choice of ride was his own LPJ Special

In 1980, Lessard, driving his famed LPJ Special, captured the championship in the Braden class, a class set in honor of the late Bill Braden who died racing his boat in Huntsville, Ontario. 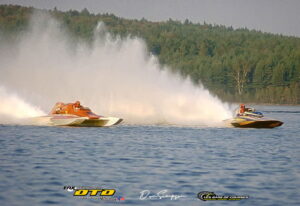 By the middle of the 82 season, J.P. was behind the wheel of the GP-247 Deep Water Special owned by Norman and Sandy Lauterbach and continued to drive the Deepwater Special through to the end of the 1984 season. But it was the 1983 season where Lessard started to truly put his mark on the sport. J.P. drove his LPJ Special to the high points championship title along with the Nationals title. Jean Pierre won every race that year in his 5-liter boat.

In 1983, Lessard driving the “Deepwater Special” GP-247 took the honors in the Seven-Up Invitational at the Regates de Valleyfield. 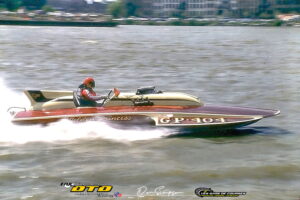 The season that stood out above others for Jean Pierre was 1985 season.  It would be a dream season for this Quebec driver. Lessard teamed up with long-racer/boat owner Warren Wilhelm out of New Jersey. Wilhelm campaigned boats in the past such as the Happy Hooker and Bewitched. That year, J.P. piloted the GP 404 “Golden Princess” to victory in Detroit, Montreal, and Cocagne, N.B. But to clinch the high points championship, Lessard would have to finish ahead of rival Robert Theoret of Valleyfield, Quebec onboard the GP444 at the final race in Littleton, N.H.

The two veteran drivers were virtually tied in points going into the finals. In the end, Lessard finished second in the feature race behind the winner Jean Theoret, aboard the “Miss Danash.” As for Bob Theoret, he was penalized for pushing, handing the championship to Lessard. Jean Perrier also added the World and American championship titles to his resume that season. 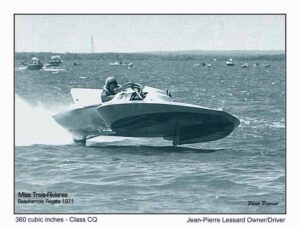 In 1986, J.P. did not return to the Golden Princes’ team as Warren’s son Richard took over the driving duties.  Lessard moved on to pilot the Miss Pepsi boat, a ride that J.P. was familiar with as this was the former GP 247 Deepwater Special. That year he also piloted Leboeuf’s Schenley” GP-1001 boat.

For the next few seasons, Jean Pierre piloted the Miss Pepsi along with the pickle forked Nordic GP 25.

In late 1987, Jean Perrier ordered a new Lauterbach to be built at the famed Portsmouth shop. This turned out to be the last of the great Lauterbach GP boats to be built as Cabover boats became more dominant. The introduction of the safety capsules was becoming more common, but this idea could not be worked into the old conventional design. 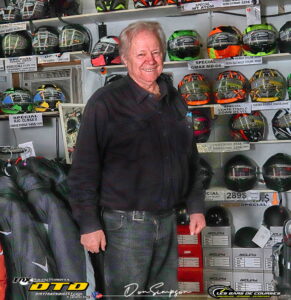 The “Dynasty” GP-242 took to the waters in 1988, with Lessard winning the Laurentide Invitational at the Regates de Valleyfield early in the season. J.P. would later go on to win the Dartmouth Grand Prix final that season.

The following season J.P. once again won the Invitational at the Regates de Valleyfield. He later went on to win the 1989 final at Ville-Marie, Quebec. This would be the final Feature win by a Lauterbach boat in the Grand Prix class.

By the 1990 season, the Cabover boats were boats of choice, plus the immunity mandate for capsules to be installed on all boats, the writing was on the wall for Jean Perrier and his beloved Lauterbach boat.

The final performance for the legendary Lauterbach boats would be in 1992 with J.P.’s “Dynasty” GP-242. He was set to go up against another legend in Hydroplane racing whose choice of boat was also a Lauterbach. The two dynamic drivers did not disappoint fans as the two dueled the entire race side-by-side. This one race was so epic, a battle between two legends of the sport it was rightfully nicknamed “the race.”

Later that season, Lessard went on to make one final mark in the sport he loved and that was to finish the season at Baie Saint-François, which hosted the World, U.S, and Canadian championships. Out of the entire field of boats challenging that weekend, only two were conventional open-wheel boats. Lessard used his sheer talent as a driver to close out his career proving he could still run against all the high-tech boats. He finished in the second position.

Today Jean Perrie Lessard will be turning 80 years old this month. He still works each day at his business LPJ Equipment Inc. His office is sprinkled with memories of days gone by in racing.

A quiet but sharp-minded soul who loves to reminisce about those days, but is content about leaving the sport at the right time. The only sad part is he wishes that he had kept his boat. Luckily the “Dynasty” GP-242 lives on today and has been lovingly restored by current owner Robin Demers — a fighting way to preserve what Jean Perrier Lessard has left to the history books of boat racing.