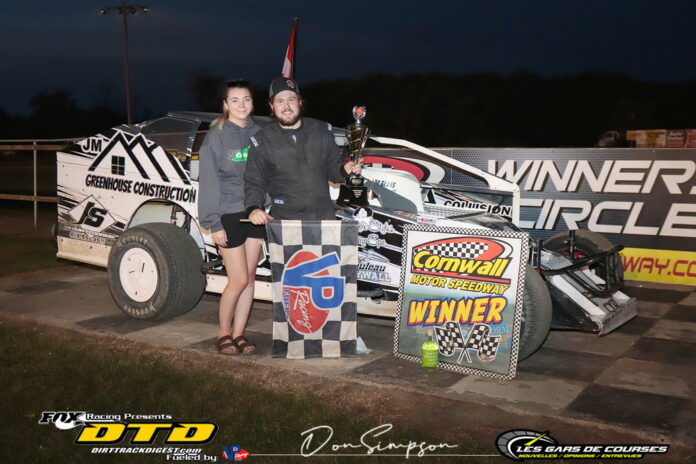 Small home-grown teams are the lifeblood of Dirt Track racing. Drivers like Gabriel Cyr trickle into their local tracks every weekend to live out their passion for racing.

As the cost of racing rises, we are all aware it is becoming harder to race for some. Then there is the fact of the pandemic, with all its negatives. 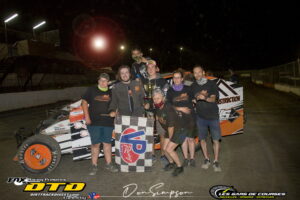 The last two seasons have been a bumpy road for most, but for Gabriel Cyr, it’s been two outstanding seasons of racing. In 2020 Gabriel finished fifth at Brockville Ontario Speedway and a close third place in points at his home track of Cornwall.

In 2021 Gabriel had his best season, finishing once again a close third in points at his home track of Cornwall. Gabriel picked up three feature wins throughout the season, two at Cornwall and one at Autodrome Granby. He also picked up five top-five finishes, three of which were on the podium. At the Annual Brighton Applefest Weekend, Cyr finished in the top five each night, a great outcome considering over 40 cars were challenging for the win each night. 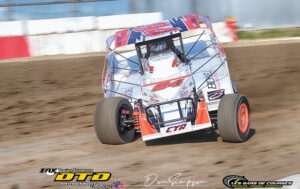 The hard work of this small team, obstacles, and time over the last seven seasons have finally paid off and this small team is getting the results they strived for.

Overcoming obstacles is nothing new for this small team as Gabriel and his dad Eric Cyr have learned to work with what you have or find a way to make it work. You have to go back to 2010 to see how this work philosophy came about. 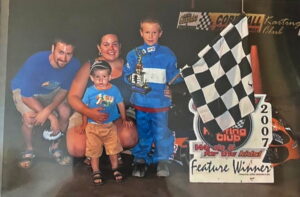 After racing in the Kart ranks for three years, Gabriel was asked to join Billy Cook’s team to help with the car. That summer, at the age of 11, Gabriel stayed with the legendary racer. Bill Cook has been in the sport for over 50 years and has raced everything when it comes to dirt track racing.

Billy took this young protégé under his wing and began to teach him the art of racing. Along with helping Bill, Gabriel also helped Thomas Cook, Billy’s grandson. From time to time, the young helper could be seen in the Gage Morin pits as well, as this apprentice learned the trade.

Eric Cyr explained, “We had the great opportunity to meet Billy and Thomas at Cornwall and the whole family. We spent a lot of time there traveling back and forth from Cornwall to Billy’s shop in Hogansburg. I can see the passion and excitement for my 11-year-old son at the time, as Billy allowed him to work and help with the Mohawk Express race team. As Thomas and Gab weren’t too far apart in age, we pit crewed for them for two years if I’m not mistaken. Gab and I got to learn so much from Billy and Thomas so it was an amazing time. One day Billy said to Gab “go test out the car in my track,’ and so he did. Billy would coach him through that day as he did about 50 laps. From that moment, Billy would let him practice on his track just about every time we get the chance. Billy really took him under his wing at a young age. What an amazing time that was for Gab and me.” 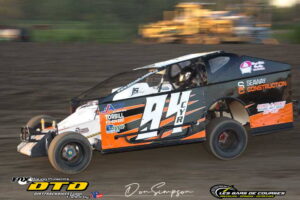 Things progressed further during the Fall of 2013. Watching Gabriel practice on his private track, Billy was so impressed that he offered the young driver a chance to build his own car from one of Billy’s spare chassis.

The project continued through the Winter and by the Spring of 2014, the car was ready to race. Gabriel’s first race was at Can-Am Speedway in the Rookie Sportsman. A 1/2-mile oval, Can-Am is a very fast track, where the young driver had to rely solely on his Karting skills to get him around the track. The following week, Gabriel raced the opening night at his hometown track at Cornwall, a 100 lap affair in the Race for the Cure series race. 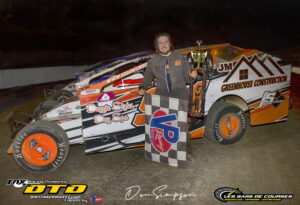 That first season was challenging but Gabriel picked up six feature wins in the Rookie Sportsman, two at Mohawk Int. Raceway and four at Brockville. Those first years were tough especially going up against the bigger teams.

Gabriel and Dad Eric perceived do you mean persisted? and started the 2015 season off in Rookie at the Brockville Ontario Speedway, picking up three more wins that year. Cyr would also race in the Sportsman division at Cornwall, where the team won their first Sportsman feature that season, a big win for the team going up against the top Sportsman in a 10-year-old car and winning.

It would be four long seasons before the team would visit victory lane again, but that doesn’t show the true talent of this young driver considering at the time he was racing a 2006 Troy, but still finished in top ten, many times.

Things changed for the 2019 season, as the team bought Gage Morin’s old 358 Modified, a small step up from what they were racing the past four years. That year, the team managed seven top-ten finishes. Gabriel then entered and qualified for the Chevy Performance 75 at Super Dirt Week. He finished 23 in the feature, out of some 101 cars that tried to qualify for the show. A good result considering the older car they had. 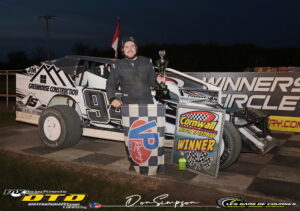 We now come full circle to these past two seasons. Gabriel produced good results at Cornwall and Brockville Speedways, finishing fifth and third respectively. These good results did not go unnoticed as JM Greenhouse Construction came on board with the team and soon after, the team purchased Corey Wheeler’s championship car to add to the 2021 race campaign.

With a new car and with great sponsors, the team has just come off the best season of racing so far and things are looking even brighter for the upcoming season. 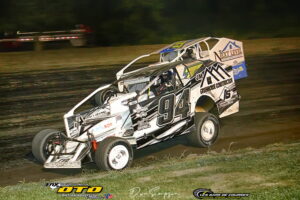 Team 94 will see 2022 with a new shock program along with a fresh motor, acquired last season with just a few races on it. With the help of their sponsors, the team has also stocked some new parts to help carry them through the 2022 season.

Gabriel said, For 2022 we’re looking forward to having our best season yet. With an updated car, and all new/fresh parts, we want to be a threat each and every night at all the tracks. We are hoping the border restrictions will allow us to travel as we’d love to run the full DIRTcar Sportsman Series along with the Ogilvie’s Series at the Brockville Ontario Speedway. We are also looking to race the new series at the Quebec tracks. It all wouldn’t be possible without my great sponsors that support us and I can’t thank them enough.

“If it were not for our sponsors, all of this would not be possible. I would like to give a big thanks to JM Greenhouse Construction, my main sponsor. I would like to also thank JS Flooring, Doggie Style Day Spa, and J&A Collision Centre who have been with me since my very first year. Also, I thank Serge Rouleau Drywall, Alan Wheeler with Storm Reality, and Kool Boy Products.

“With the new sponsor this season, I am excited to work with is Eric Loyer {Remortgage Du Plateau} This is a big addition to our team this season. Also, thank you to Dig Racing Products for helping me with our new shock package, MFE Health Group, and finally Tina’s Pride. Thanks to all these great sponsors for everything you do for me. Without all of them, I wouldn’t be able to race as we aren’t a big-budget team and we do with what we have.”

Going back to the point of this story, small teams are essential for the sport, and Team 94 of Gabriel, Sophia, and Eric, are ready to challenge.