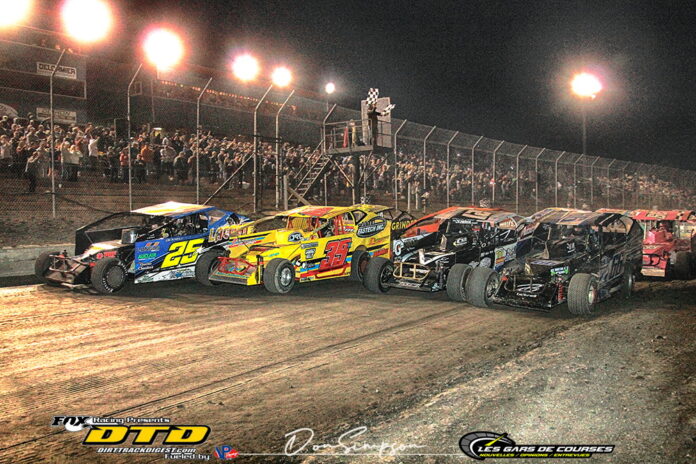 Current title holder Corey Wheeler is already in the process of defending his championship. The two-time winner of the Fat Les’s Chip Stand Canadian Nationals will pull out all the stops in the hopes of winning the Hat Trick, becoming the driver with the most wins in this series.

Corey explained, “Winning the Canadian Nationals has been special to us, given how much Les Winters Supports it and enjoys the series!! There is so much competition that anytime you can put your name on the trophy is something special, We will work hard again this year and see where the chips fall!!” 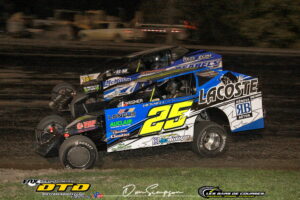 For this year’s competition, at least a dozen top teams will also bring their best to the series season. Last year saw one of the closest battles titles in a number of years. Yan Bussiere, Luke Whitteker, and Corey Wheeler went into the final race in the 2021 series in a virtual tie. Closing out the top five were Brian Mc Donald and Kyle Dingwall, both within reach of winning as well. In the end, of course, Corey Wheeler inched out the win. It will be just as tough this season with no guarantees. Anyone can win this year’s edition of the series.

The Canadian Nationals was created by former track owner Ron Moran who wanted to generate a series specifically for Cornwall Speedway. Previously, Ron had established a multi-track series that featured other local tracks with much success.

“With time the series is growing,” said Moran.  “So did the length of working hours. It was decided at the beginning of the 2009 season that it would be the last year for the Lucas Oil Canadian Dirt Series.”

With the demise of the Lucas Oil Canadian Dirt Series, Ron had to come up with something new to replace this exciting event, so he went back to the drawing board

Modeling the series after the highly successful Lucas Oil Canadian Dirt Series, the plan was to have three, 100-lap event, topped off by a 125-lap final, which would include pit stops halfway through the race. In 2011, the Cornwall Canadian Nationals Series was born.

In the series’ inaugural year, two events were rescheduled due to bad weather. Stephane Lafrance won the championship after beating a field of 28 cars in the final race.

When the series grew, Ron tweaked it with prize money based on things like laps led or attendance incentives for teams that attended all races.

The Canadian Nationals continued to draw more racers to this now-premier series as time went on. Some of the top 358 Modified drivers from Ontario, Quebec, and New York State have answered the call to race in this event over the years.

Local racers Raabe, McDonald, Wheeler, and two-time series winner Stephane Lafrance competed among Plank, Johnson, Clair, Rudolph, Hearn, and Sheppard. Over the past decade, these drivers, as well as many others, have taken the green flag at a Canadian Nationals event and put on some spectacular performances.

In early 2014, the long-time owner Ron Morin retired and sold the track to the local Lavergne family. He would, however, continue in an advisory role. As a result, the new owner, Raymond Lavergne, was so taken with the series that he wanted to not only keep it going but also enhance its basis. Raymond pushed the series and drew in additional sponsors, resulting in ever-increasing payments.

It has now been eight years since Raymond Lavergne took command of the Cornwall Motor Speedway and the Canadian Nationals series is still alive and well. There have been a few bumps along the road concerning sponsorship, but Raymond and the Lavergne family always come through and the series continues to grow.

Since the Nationals series began, the platform name has reflected the main sponsor to acknowledge their involvement and thank them.

In 2019 Raymond secured a deal with the local businessman Les Whiters and the two have worked closely together ever since to provide a stable points fund for the series. The series was then known as the Fat Les’s Chip Stand Canadian Nationals.

Raymond mentioned, “I am appreciative of all the support Les has brought to the speedway over the years, sponsoring this premier series. Les and I have a good rapport and want to bring fans the best possible.” As for the coming season, the Canadian Nationals opening round will be on Sunday, May 22, but with the situation regarding COVID, this is still fluid, and there may be some restrictions. Only time will tell.”

A lifelong passion for racing has driven Les Winter as he stated, “I love the sport. It has been in my blood from birth as my dad raced for years, but also was a great race fan bringing me along to the races. Despite all these years, I still enjoy going to the races with him each week. The opportunity to give back by sponsoring this great series is very rewarding for me. Working with Raymond and the Lavergne family has been great and seeing the dedication Raymond has for the sport inspires me to help as much as I can.”

The Fat Les’s Chip Stand Canadian Nationals kicks off Sunday, May 22, with the first 100-lap event. This year’s points funds are still in the works and will be released in the coming weeks. For all the updates on this event, please visit the Cornwall Motor Speedway website at https://cornwallspeedway.com.

Past winners of the Canadian Nationals Modified Series