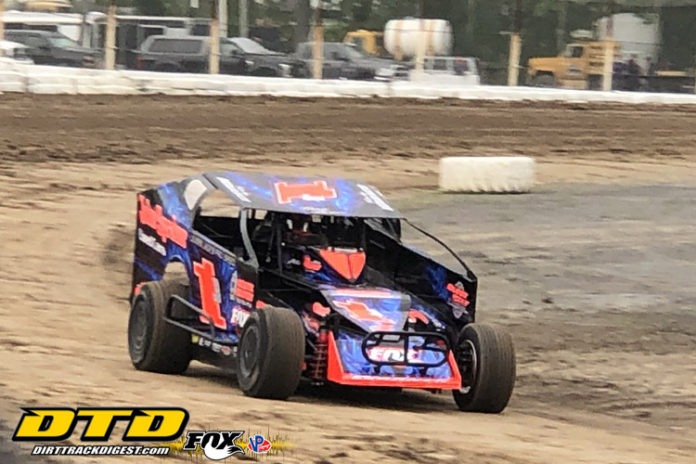 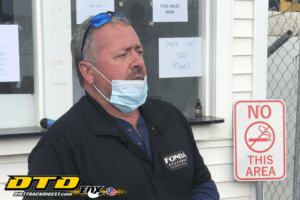 Who would have thought we would be going to our first race at Fonda Speedway in the middle of June.  With all the issues of the virus, area tracks have been doing their best to get things going.  For Brett Deyo and company, he added to his duties by running both Fonda Speedway and Georgetown in the state of Delaware on the same night.  Fortunate for Brett Deyo he was able to leave Fonda in the safe hands of Jamie and Denise Page and Angela Hanson.  They did an outstanding job. 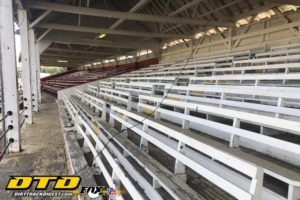 With no fans in the stands Saturday everything was pretty much just the pits and with the concession stands open in limited capacity we were pleased with the effort to keep the counters spotless.  Also each bathroom had an attendant to wipe things down after being used. 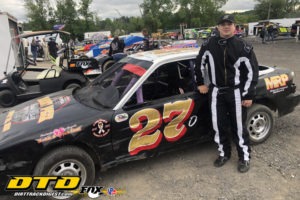 One of the first cars we noticed was the Four Cylinder No. 27D, with a noticeable replica paint job to honor the late Harry Peek, a former Fonda Speedway champion.  The driver, David Peek Britten, of Rock City Falls, who said he had been to Albany Saratoga and was now ready to practice on the new Fonda Speedway surface.  This young man knows he has a lot to live up to in his Grandfather who was not only a track champion but, foremost, a real gentleman.  David was pitting next to the No. 27A Modified driven by Steve Akers, so as David is learning he has someone to lean on.  To no surprise, his mom is also a major player on the team.

Defending Modified track champion, Rocky Warner of Gloversville, was on hand on Saturday to take advantage of practice prior to Sunday’s show.  Sitting in the seat of Rocky’s No. 1J was Michael Walton of Fastline Performance making adjustments to the Jake Spraker owned car.  Rocky said he will defend his title at Fonda and will also run Albany Saratoga regularly and pick up some special shows.  On Sunday he will be at Glen Ridge but only to support his boys, Tanner and Corky.

We stopped by the Dan Santabarbara of Guilderland, No. 7J, 602 Sportsman to speak with a couple of his crew members for the night, former Modified champion, Jeff Trombley and former sprint car driver and current owner, Warren Alexson.  They said, their racing, this season, will be the same as last, they will race when they want to.

Car owner, Laudy Hoyenga put Sportsman driver, Adam McAuliffe behind the wheel of one of his four cars this season and it still has the familiar No. 234.  McAuliffe finished third in his heat and pulled out an 11th place finished in his first Modified feature.  Spoke with Adam McAuliffe and he said a week ago in practice he was sixth or seventh fastest with the Modifieds but that the Modified is a completely different animal than his former 602 Sportsman. 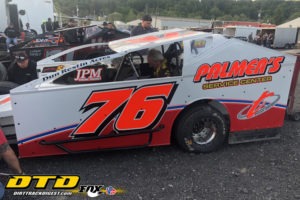 This season Palmer Racing put veteran racer, Jeff Heotzler in the seat of their No. 76 Modified and on Sunday at Fonda Heotzler finished second in his qualifying heat to Stewart Friesen but didn’t fair as well in the feature and finished out of the top ten.

Alton and Carole Palmer have always been huge supporters of Fonda Speedway and the racers and on both Saturday and Sunday they put up bonus money for the heat winners in the Modifieds, 602 Sportsman and Pro Stocks. 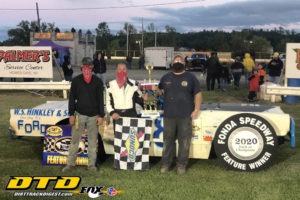 The Mohawk Valley Vintage Dirt Modifieds group showed up in full force for the first race of the season at Fonda.  We spoke with the winner of the Vintage Replica Late Model race, John Roese and he said it was the weirdest thing being interviewed and looking into the grandstands and not seeing the fans.  “You usually feel you’re speaking to the people, said Roese, but there was only Mimi and a few photographers”.

We messaged Albany Saratoga regarding media credentials for they opener on Friday, June 12, but received a message that no media would be allowed so we tuned into DTD.TV to see the season opener at Albany Saratoga, which by all standards was great coverage from a comfortable viewing seat.  As Ed ate his ruffle potato chips and Betty her popcorn, we knew it wasn’t a sausage and pepper sandwich from the concession stand.

Looking ahead for this weekend Lebanon Valley has information on their website that includes prices for the pit gates and front gates.  The racing will include Modified, Sportsman, Pro Stocks, Pure Stocks and 4-Cylinders.  Special events and bonus payouts include Boomer’s Performance Classic for Pure Stocks and an additional $500 payout Modified winner in memory of Butch Jelley and additional $272 to the Sportsman winner in memory of “Peanut” Pierce.  Everyone must wear a mask and practice social distancing at all times.  Check the website for addition information.

Wednesday starts “Phase 3” of reopening New York so we advise everyone to check local track social media sites for the most updated information.

In closing we send our condolences to the family of Edmond “Peanut” Pierce, long time Lebanon Valley car owner and Hall of Fame member.