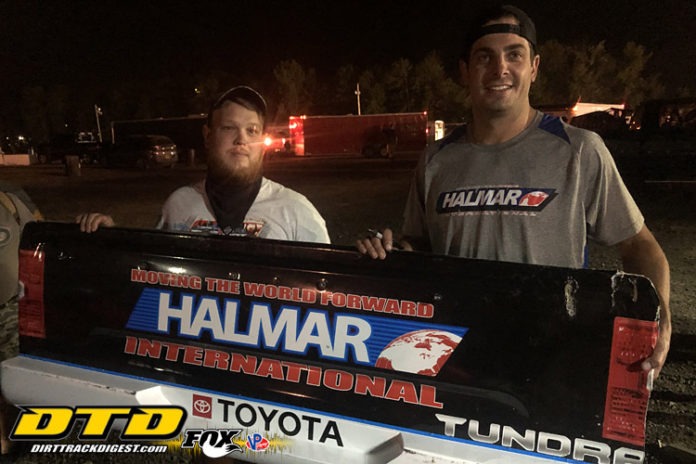 Here we are nearly at the end of June and we now have been to Fonda the past two weekends. This week the racing program was back to nearly normal. With temperatures nearing the 90 degrees it made for a challenge to wear a mask. Infield parking or drive-in section was in effect once again and many took advantage of it. On the grandstand side the seating was taped off so there would be safe distancing of at least six feet. 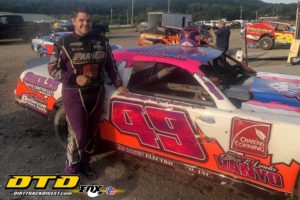 Ivan Joslin is one of the local drivers we like to check in with and Ivan had a rough time last weekend at Glen Ridge. “I’ve raced twice this season and the car looks like it has a whole season on it.” Ivan ended up on his roof at Glen Ridge but he said it was an easy roll and hopes his bad luck is over.

Palmer Racing was unhappy with the way the No. 76 Modified ran the week before. Alton said they received the parts late in the day and were forced to put the car together quickly and they thought that might have been the reason for last weeks unfavorable performance. But after a week to make adjustments the car was still not handling well so during this weeks feature, driver, Jeff Heotzler decided to bring it to the pits rather than take a chance at wrecking it. Alton said we’re not waiting all season to fix it, and the car will be on its way Sunday morning to have Vinnie Salerno take a look at the set up.

Josh Coonradt was the Pro Stock track champion at both Fonda and Albany Saratoga in 2019 but the 2020 season started rough for Josh. He was forced to man handle his Pro Stock because the handling set up was that far off. Josh worked on the car this past week and what a difference it made, he found victory lane at both Albany Saratoga, Fonda and Utica Rome this weekend. Fans were familiar with Josh’s No. 00 Pro Stock for much of his early career and this year he came out with the No. 70x on his car to honor his father, the late Darryle who was also a racer. 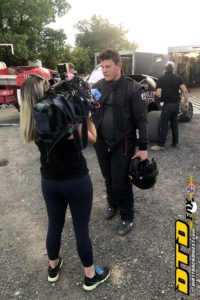 We stopped to see 16-year-old, Charlie Tibbits, who competes in the 602 Sportsman. At 16 many wonder how much experience Charlie could have. Well, Charlie has been behind the wheel of something since he was four years old. We remember being at Utica Rome when he made his debut in an open wheel car at the age of 12. He began his career in go-karts and moved to Sportsman four years ago. His dad is a long time car owner and sponsor for many cars. He currently sponsors Danny Varin.

On Saturday night, Sports Anchor, Liana Bonavita of Channel 10 in Albany came to Fonda to do a segment on fathers and sons in racing for a Father’s Day special she was doing. She interviewed Danny Varin for his story of he and his father, Bobby and Charile Tibbits for the connection he and his father have through racing. It was great to see 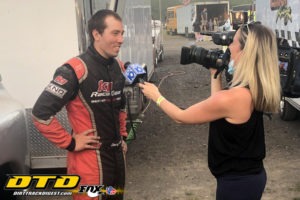 Channel 10 at the track. It’s been many years since much coverage has been done on local racing and we appreciate the fact that Liana took the time for the story. It ran Sunday night on Channel 10 and gave Fonda some great coverage. In addition on Saturday night she ran a brief report and interview with Stewart Friesen on his season. 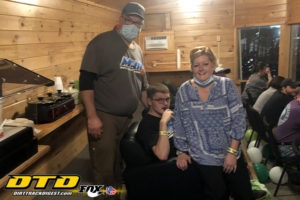 In victory lane after the Modified feature at Fonda we had the chance to meet the night’s sponsors, from Kelly’s Meat Market located in Little Falls, N. Y. I talking with Patrick Kelly about his sponsorship of the evenings events, he said that he and his family had a great time and it won’t be the last, he likes dealing with Brett Deyo and his staff. His son, Matthew was thrilled when he got to throw the green flag for the feature. We love seeing new faces at the races and the folks from Kelly’s Meat Market are a great addition to those supporting Fonda Speedway in 2020.

After celebrating in victory lane, Stewart Friesen took time to sign autographs for his fans and standing in line was Jareth Fleming of Ballston Spa who was carrying a tailgate from one of Stewart’s No. 52 NASCAR trucks. Jareth said it was from the truck race at Charlotte and he had been waiting to get the chance for Stewart to sign it. For those keeping track, the win for Stewart on Saturday was number 62 at Fonda, his ninth win this season at seven different tracks in five states.

As we close our advice to our readers is to check social media for information on local tracks and their events. It’s pretty much the only way to stay up to date on what the schedule and protocol is at any track. Fonda has the Firecracker 50, scheduled for Wednesday, July 1 and that according to a press release is still on the books, the STSS North Region event will pay $10,000 for 50 laps for Modifieds, $2000 for 602 Sportsman. The event will be streamed live on DirtTrackDigest.TV in addition to in person attendance.