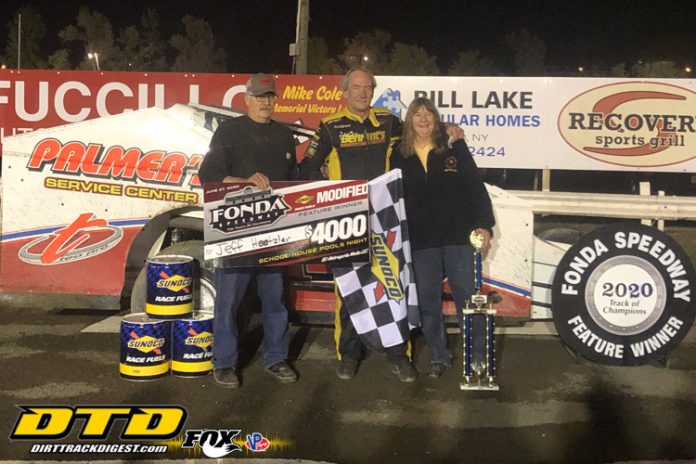 This will be a race season that goes down in history. For the third week we sat in our recliners at home to enjoy the coverage of Albany-Saratoga racing from DirtTrackDigest.TV. Great run by Mat Williamson picking up his first career win at the Great Race Place. 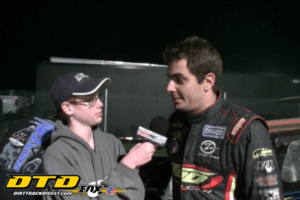 Our Saturday was a busy one. We attended the graduation of our grandson, “Future Fast” Andrew Biittig. Fans at Fonda will remember him as the young man that did a few interviews at Fonda a few years ago. Even with all the restrictions due to the pandemic it turned out to be a great day. Later in the day we had dinner with Andrew and his family and after Ed headed to Fonda to arrive by 8 pm, a little late but still in time to enjoy a few conversations and great racing.

Spoke with Alton and Carole Palmer about the racecar and Alton said everything looked good. After the Modified feature there was no doubt as the Palmer No. 76 sat in victory lane with Jeff Heotzler recording his first ever checked flag at the Fonda oval. He started on the front row and many tried their best to run him down, with Craig Hanson and Danny Varin giving it their best shots, until Hanson had a flat tire and Varin was overtaken by Rocky Warner who finished second, Varin third. The only sad note was there was no fans in the stands for the Jeffer’s first Fonda win; and the Fonda fans just love first time wins. The excitement in victory lane was something special. And we thank him for pulling Ed’s 50/50 ticket as the winner. It may have been Jeff’s first Fonda win but we do not think it will be his last. 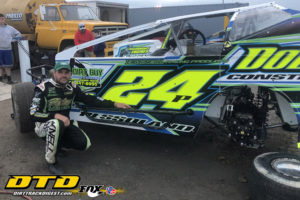 We also had time earlier in the evening to speak with Brian Pessolano who started racing in the Sportsman division in 2009 and moved to Modifieds last year where he says he is comfortable now. He finished sixth in the 2019 Fonda 200 showing that his talent has also moved up. Brian shared that he had a few issues to begin the season but things have improved the past few weeks. He is happy with the new surface and says it’s better than some he’s seen over the last few years. If it were his choice he would have a slick track every week. He realizes he is racing against some who race for a living, with much more equipment to draw from and he is happy with where he is now and appreciates his car owner, Richard Dodson, Sr., and his efforts each week that provide him with a top notch ride. 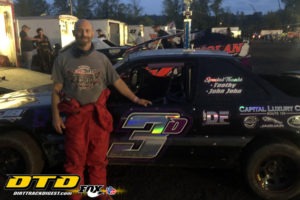 Dual Cam Cruiser driver, John Napoli also recorded a first win at Fonda on Saturday night. John went into the night fifth in points in the divisions and like most racers said now that he has one win at Fonda he will want more. John is in his second year in racing as a driver and this season he has a new car to work with. He’s been going to Fonda since the 1980’s as a fan and also as a crew member on several different cars.

Another casualty of the COVID-19 pandemic is the 2020 Dirt Northeast Modified Hall of Fame induction ceremonies scheduled for July 23 has been canceled due to health and safety concerns. The previously announced Class of 2020, drivers Brett Hearn and Harold Bunting and the late Joe Donahue; car owner Tico Conley; mechanic Billy Taylor; promoters Bob and Donna Miller; TV producer Tery Rumsey; and Woman in Racing , April May Preston-Elms will all be honored next summer on a date to be determined.
Midweek shows begin this week with the STSS event at Fonda on Wednesday

Grandstands and infield are open for the second annual “Firecracker 50” with masks and social distancing required. The event will pay $10,000 to win for the Sunoco Modifieds and $2,000 to win for the Swagger Factory Apparel Crate 602 Sportsman. Live video coverage will be available on DTD.TV for Wednesday, and Saturday, July 4 for the weekly racing at the Track of Champions.

On Thursday, July 2 action moves to Orange County Fair Speedway for twin 50’s for Modifieds paying $5000 to win each plus a $5000 bonus to win both, and USAC Wingless Sprints. Ed has plans to attend so we should have an update on happenings at OCFS for you next week.

And as we said in past weeks, check the websites and social media sites for the tracks
most updated information on any events and protocols.