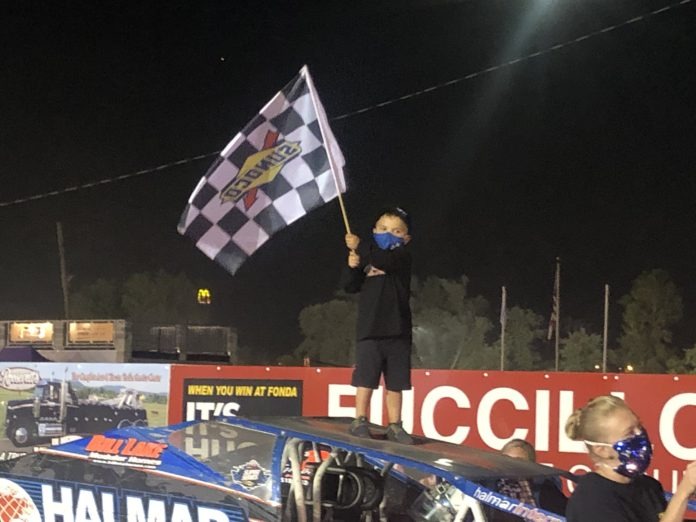 Our week was to start at Fonda Speedway on Wednesday night but after everyone arrived the rains moved in and forced cancellation and postponement to Sunday, July 5th making a full weekend for the Montgomery County oval. 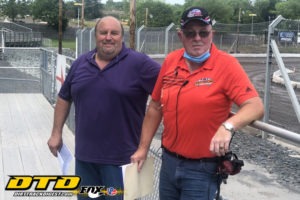 Thursday we made the road trip down the NYS Thruway to Orange County Fair Speedway. Recently every trip to OCFS has peaked our interest as to what has changed or been upgraded at the 100+ year old speedway. Of course with the world we’re living in today the sign-in process was the first major change we encountered. We filled out two pages of contact tracing information and then we entered the office one person at a time, where our temperature was taken. After signing in we were issued an access card to the grounds and to the half covered grandstands.

Another major change that came about due to the COVID-19 pandemic was the moving of the pit area to the outside of the track area to follow social distancing guidelines. No haulers in the infield makes for a real improvement in visibility but of course their are no fans in the stands to experience it, only in the drive-in section. Another huge improvement is the brand new lap counter between turns three and four. 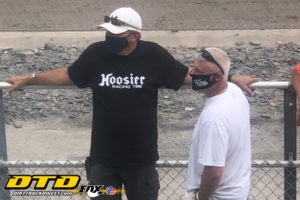 The drivers meeting was handled by two familiar faces, Mark “Krash Mender” Krosky, Race Director, and Steve Burega, Pit Steward. Leading by example and wearing a mask was General Manager, Brett Hearn, seen in our photo with driver, Andy Bachetti, also wearing a mask. We personally want to thank them for wearing masks. 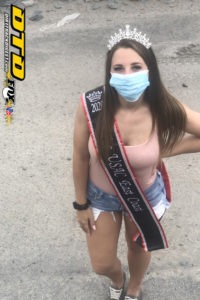 Making a visit to the track on Thursday was the USAC Wingless Sprints. Representing the group to present the winners trophy was Megan Williams of Kurtztown, Pa. The whole world is trying to tell us that young people are not following the rules but Megan is a great example of one that is, as she was in the stands, wearing a mask and social distancing.

The show on Thursday included twin 50 laps events for Modifieds and Stewart Friesen was the winner of the first. The second feature had a history making moment with two young ladies on the front row; Jessica Friesen and Allison Ricci and they did one outstanding job holding onto the top spots. Jessica finished third and Allison was forced to pull in with mechanical problems at 30 laps. Matt Sheppard won the second event with Billy Decker second. 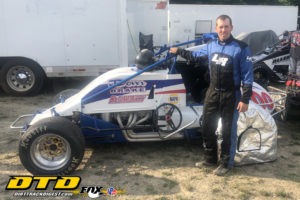 The USAC sprint field had one local favorite in the field, Danny Varin was behind the wheel of the familiar Dover Brake No. 00. Danny won his heat and his 15th starting spot in the feature gave him a real chore to get through the field but he was able to squeeze out a fifth place finished.

On Saturday we returned to Fonda for what was now a two-day adventure due to the rainout of the Firecracker 50 on Wednesday that was rescheduled for Sunday. The weather cooperated on Saturday and several of the cars that planned to run Sunday were on hand to shake down their cars. 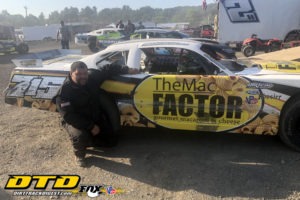 Ed has not eaten Macaroni and Cheese in years, so when he spotted the No. 715 Pro Stock of Jason Morrison with the entire car wrapped to look like a giant box of Mac and Cheese he just had to speak with the driver. Jason said he hopes to bring one of his sponsor’s Mac Factor food trucks to the speedway some evening so that people can enjoy the gourmet delights that it offers. Jason lives in Caroga Lake, is a self-employed mechanic and has been racing for four years. Although his sponsor offered to put him in a modified he said he is sticking with the Pro Stocks mainly because of the cost of maintaining a Modified. He is happy with this season so far; he has had finishes in the top ten. 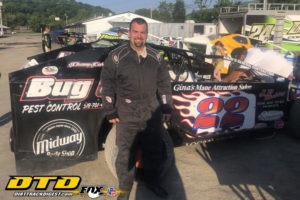 Our next stop was at a familiar looking car; black with a flaming No. 22 gracing the door panels. We spoke with the driver, Anthony Cardamone and he said that when he started racing open wheel cars he just wanted to have a car that looked like one of Dave Lape’s. Anthony has a 358 Mod at home but is racing in the Sportsman class because of the cost of racing in big blocks. He does his own welding and anything else that can save him money. Much of what he’s learned is from being with Dave Lape. Anthony shared a special moment in his racing when one day he came home to find the Dave Lape hauler and truck in his yard. Dave told him, “Fred Barrows gave it to me and I want to pass it along.” It’s moments like this in our sport that make it what it is…Special. 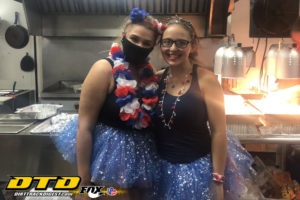 When you spend the time we do at race tracks you appreciate the importance of having good food along with good people in the concession stands. These two young ladies, Katelyn and Tiffany, were all decked out in Fourth of July garb and were so very pleasant to deal with. Denise Page does an outstanding job in procuring great food and wonderful people to serve it.

“Out of the mouths of babes” or in this case, over the nose and mouth of babes; Parker Friesen celebrates with a roof dance atop his father’s winning Modified on Saturday and shows everyone how to wear a mask and still enjoy the moment.

Friesen repeated with a win on Sunday in defending his Firecracker 50 win from last season.

On Sunday before the race we spoke with Larry Wight on his plans to stay at the Land of Legends on Saturday night even when Fulton opens and he said, “I’ve won two small block titles there and had thought about changing things up.” Larry finished second to Stewart Friesen on Saturday and repeated his second place finish on Sunday in the Firecracker 50. Larry sits second on our list with eight wins this season at three different speedways; three at Volusia, one at Chatham, and four at the Land of Legends.

Great to wrap up another weekend of racing. For coming events, check social media and track websites for the ever changing information.