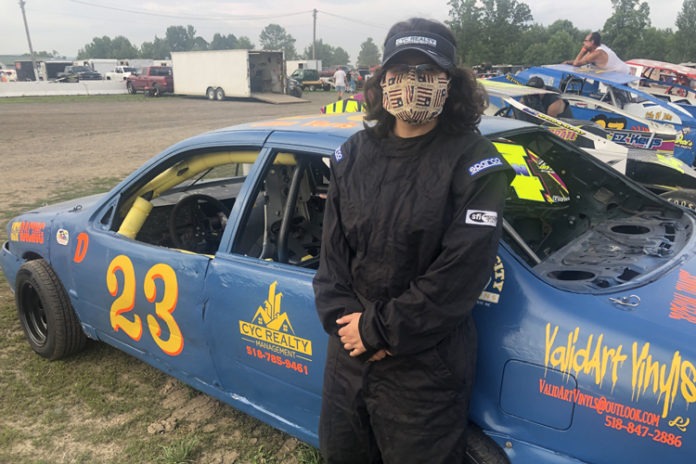 Just when we thought we had seen enough with this virus, Ed injured his back and will be slowed down for a while. His back seized up at Glen Ridge a week ago and he had to leave early.

Before he left he was able to speak with a newcomer to racing, Gina Voris from Niskayuna. At 19 Gina decided she wanted to try her hand at racing after spending years with her father in the stands as a fan. At the time we spoke with her she was in her third week of racing at Glen Ridge. She currently sits fifth in the Mini Stock Dual Cam points with one top five and three top tens. Gina loves being on the track and says she is treated well by her fellow racers. She hopes to move up the another division in the future. Friday night she ventured to Albany Saratoga for the first time where she raced in the Four Cylinder Dual Cam division.

“It’s so much faster there, and I did fear that somewhat,” said Gina after her first night at the Great Race Place. Gina works at Head to Tail pet wellness center. We are always looking for new faces in out sport and we will be watching this young lady.

Friday we tuned in to DirtTrackDigest.TV to watch the racing at Albany Saratoga; it’s become our Friday night routine. After four weeks of racing one driver that may have not been looking forward to another night at the track was Kenny Tremont, Jr. The No. 115 had led two of the four previous Modified shows when he came in contact with other racers doing damage to the No. 115. On Friday Kenny showed why he has 13 track championships at the Malta oval. Kenny won on Friday night but not without holding off strong challenges from young gun, Jack Lehner.

In his victory lane interview he said, “You start to wonder if you’ve lost something after a few weeks.” 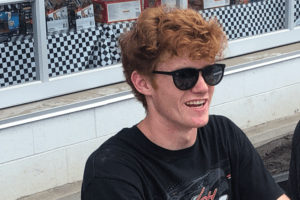 Jack Lehner finished second to Tremont on Friday and then on Saturday Jack chased Super Matt Sheppard to the checker at Orange County Fair Speedway in Middletown. As we continued to record the wins of the veterans we also keep our eye on the young guns and Jack is just one of many racing today. Jack’s performances on Friday and Saturday were to be noted; he finished second to two drivers that have nearly 800 career wins between them. Lehner’s next stop is victory lane.

Saturday we also got our racing from DTD.TV when we tuned into the broadcast from Howie Commander’s high banks of Lebanon Valley. DTD.TV does a fantastic job capturing the racing wherever they go, but the camera on the backstretch at Lebanon Valley gave us a view we had never seen before. The instant replays are a great feature and DTD.TV’s broadcast are certainly worth the price. Oh, I know you’re saying, of course you’d say that, you write for DTD, but we say, check it out for yourself. And we paid the same price that everyone else paid. 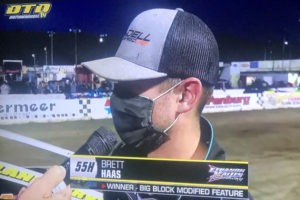 First time winners have always been special in our book and on Saturday Brett Haas’s first time Modified win was something we really enjoyed. We know he’s been to victory lane in the 358 Mods. This year Brett took on the big blocks and in his fifth outing he was in victory lane. Brett gave an emotional interview, one that was great to see and hear because he stressed how thankful he was to all the people that helped him get there and reflected on his love of racing passed down to him by his dad, who was also a racer. It’s great to see a young racer with the emotions and ability to relay it to the audience. 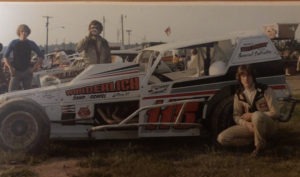 After this past weekend with Brett Haas winning his first ever Modified feature at Lebanon Valley it brought us back to a memory of another first time win at Lebanon Valley. It was May 29, 1982 and two Modified features were on the bill due to a rainout the week prior. The first main was won by long time favorite, Dickie Larkin. The second feature was won by a young man that Ed had babysit at five years old. Known now as the Sand Lake Slingshot, Kenny Tremont, Jr., put his first career win in the books at the high banks. Following Kenny to the checker was, many time track champion, Tommy Corellis, Maynard Forrette, Barry Cone and Brett Hearn. That was 38 years ago and now Tremont has 138 wins at The Valley and a total of 384 career wins over all. And to prove it was not just a fluke, he went on to Devil’s Bowl the following day and also picked up his first win there. A few years later we were enrolled in a Dale Carnegie program and as an assignment one week were asked to explain, in two minutes, something that was very exciting. Ed spoke on Kenny’s win at Devil’s Bowl where Ray Dalmata, Jack Cottrell and C.D. Coville chased him to the checker for one very exciting race. At the end of the two minutes some members of the class expressed that they had never been to an auto race. The great conclusion to this was seeing some of these people at the track a few weeks later.

As we close we send our condolences to the Flach family on the passing of John Flach, Sr., this week. He was 1962 Lebanon Valley track champion.

As we’ve said in the past, check the track websites and social media pages to see what’s happening locally and until next week please send all news and/or comments to biittig@yahoo.com