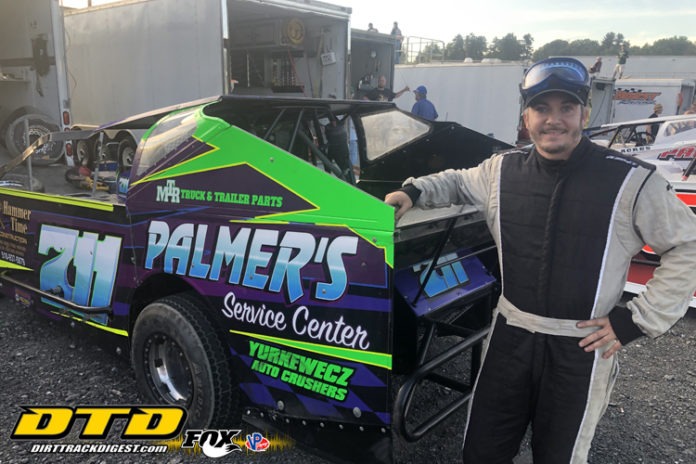 As a lifelong race fan we remember the days when there were only two divisions of cars, Sportsman and Late Models. In time the Sportsman became the Modifieds and the Late Models became Sportsman. Today a track could have as many as 11 divisions of race cars and the total car counts can run anywhere from 100 to 150 cars. It’s not easy to decide who or what to include in our column on a given week but we always try do our best to highlight the people in racing, could be driver, crew member, fan, official or anyone that helps bring the show to life each week.

At most tracks in the Northeast the Modified are the main headliner division but if not for the other divisions there would not be a show and when the drivers and crews sign into the pit area they all pay the same, no matter what the division. 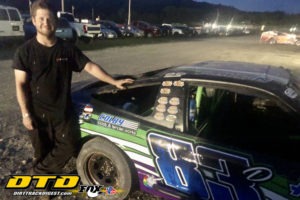 On Saturday night at Fonda Speedway after Cole Lawton found victory lane we ventured over to his pit. We found out that he lives in Delanson and we live in Duanesburg, imagine our surprise. He’s been racing for ten years and the win on Saturday was his first at the Track of Champions and he passed the most winning driver in the Cruiser division at the track, Kenny Hollenbeck, to grab the checker. Lawton has 11 wins at Glen Ridge and 38 top fives. Cole says he had raced at Fonda before but never thought he had enough car before this year. He’s very happy with the car this season. 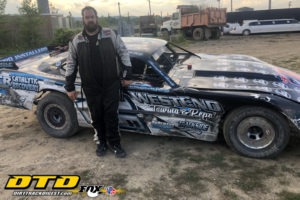 Our next stop was at Luke Horning’s pit. Luke is one of the prominent competitors in the Pro Stock division and his record shows that he is one to be reckoned with wherever he goes. He has 28 wins at Glen Ridge, 58 top fives, that includes the record for all time second place finishes. At Fonda, Luke’s record shows 20 Pro Stock wins. Luke says he’s been asked why he doesn’t move up to another division and he says, he likes the Pro Stock division and that he would only think about moving is there was a Late Model division.
One great addition to the Modifieds on Saturday at Fonda was the Nelson No. 85 with Jack Lehner behind the wheel. Jack said he was happy with the car after warmups and we were impressed later in the night with his sixth place finish in the Modified feature.

Bobby Varin returned to the track on Saturday and showed, despite taking time off, he still knows his way around the 1/2 mile. Varin was behind the wheel of the No. 18v the number that he has been connected to throughout his career. Varin finished the Modified feature in eighth place. 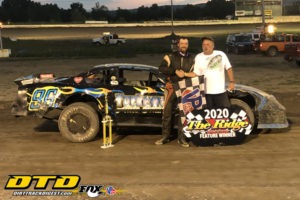 From on his roof to victory lane, that was the story of Pro Stock driver, Andy Graves this past weekend. During the Pro Stock main event at Fonda, Graves did a slow roll with his No. 96 Pro Stock and ended up on the roof. On Sunday at Glen Ridge he made his was to victory lane.

We stopped to speak with JaMike Sowle who drives the 602 Sportsman, No. 711sponsored by Carole and Alton Palmer. JaMike is very happy to be associated with the Palmers because he knows how dedicated they are to local racing. JaMike has been doing well at Fonda in the 602 Sportsman and on Friday night he was behind the wheel of the No. 76 Modified at Albany Saratoga. JaMike has a win at the track in the Modified division and said it felt good to be behind the wheel of the Mod again. Carole said she and Alton are happy with what they’ve seen from JaMike so far and his willingness to work in the shop during the week.

From on his roof to victory lane, that was the story of Pro Stock driver, Andy Graves this past weekend. During the Pro Stock main event at Fonda, Graves did a slow roll with his No. 96 Pro Stock and ended up on the roof. On Sunday at Glen Ridge he made his was to victory lane in the Yurkewecz Auto Crushers Pro Stock division. Last year in Pro Stocks, Graves at The Ridge he had 11 starts, two wins, six top fives and 11 top tens. So far this year he has eight starts, one win, three top fives and six top tens. 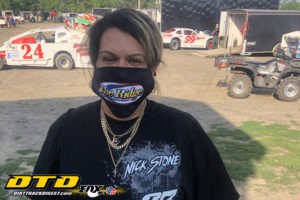 One thing we’ve known for a long time is that we have some of the most caring people in our sport. Sunday as Ed was walking through the pits at Glen Ridge he noticed someone exchanging their mask to one with the Glen Ridge logo. Patricia DeRocher had been keeping track of our COVID-19 story on Facebook and the many losses we suffered and said she was glad to see Ed at the races. She proceeded to put hand sanitizer on his hands and give him a personal bottle for his pocket. Patricia and her husband own Electric City Taxi and help out with sponsorship on several cars. They are just two of the special people in our sport.

As we close we want to congratulate Demetrios Drellos on his win at Devil’s Bowl on Sunday. Congrats also, “Double D” and wife Lexie are expecting a little “Double D” in February.

Once again we say check all track websites and social media sites for updated schedules.
Until next week please send all news and/or comments to biittig@yahoo.com