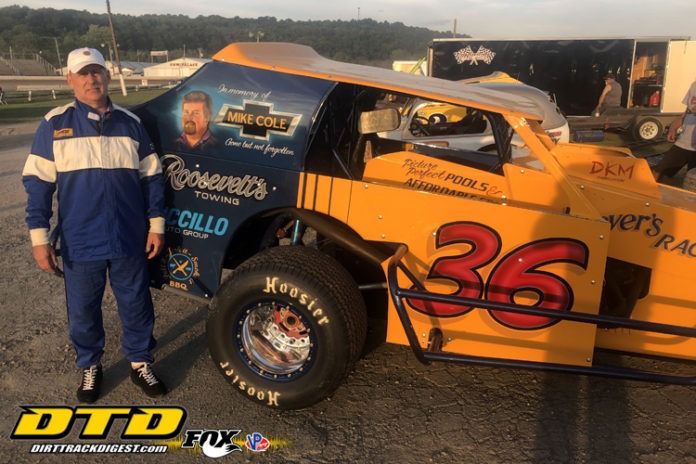 Job well done and that goes out to Laurie Fallis for all she has done to put together one fine group of vintage race cars.  Each time this group shows up another part of history appears.

One beautiful addition at Fonda on championship night was the Phil Beaver No. 36, including a tribute to Mike Cole, who we lost a couple years ago.  Phil hasn’t raced in 28 years and didn’t expect to bring it out this year, but here it is.

Phil now resides in Jacksonville, Florida.  He said it felt good to get on the track and from where we stood he looked like he had lost nothing in the years away.  Phil was in Fonda victory lane 33 years ago and it was great to see him back at the track on Saturday. 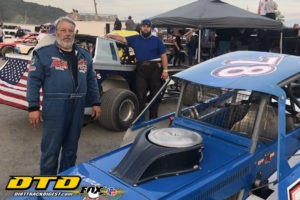 Two racers we enjoy watching when the MVVDMS come to Fonda are Frank Hoard, Jr., and Kyle Hoard.  Ed has been watching the Hoards race for many years, even back to the days when Frank, Sr., drove a VW at Lebanon Valley.  These two guys love the class and hope that Laurie is able to control the rules to keep it on a level playing field.  Kyle said he liked racing a Pro Stock at Glen Ridge but it was tough getting home late on Sunday night.  He also likes Airborne Speedway.  The Hoard family has been such great supporters of our sport and at the end of the night Frank, Jr., was in victory lane and the family got to enjoy the famed checkerboard square.  Frank, Jr., and Kyle enjoyed a one two finish at Devil’s Bowl on Sunday in the Champlain Valley Vintage Dirt Modifieds.

It’s hard to believe it’s been 20 years since we sent Lou Lazzaro home to the big track in the sky with all his racing friends.  And the sign honoring Lou at Fonda still hangs on the announcer’s tower above the historic grandstands. 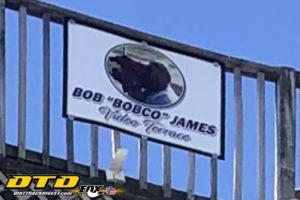 On Saturday, Fonda did what it had promised recently and placed a sign renaming the perch above the announcer’s tower the Bob “BOBCO” James Video Terrace.  Bob James has called that area home every Saturday night for over 30 years and he is currently going through some serious health issues so it was only fitting to honor him while he was still able to see it.  Thanks to Mark “Krash” Krosky who saw to it that Bob made it to the track on Saturday night to see the sign and visit with the many racers that have been familiar with him and his videos for all those years.

On Monday Ed stopped by Bob’s home with a photo of the sign.  His mother was so glad to get to see the sign honoring her son and to know how much he is thought of.  Bob still needs our prayers.

Although he has not been able to be part of the safety crew at Fonda this season due to health, Glen Roberts was at Fonda on Saturday driving the firemen to the scene when needed.  Glen is currently fighting some medical issues but was at the track to lend a hand where needed because that is who he is.  Please keep Glen in your thoughts and prayers. 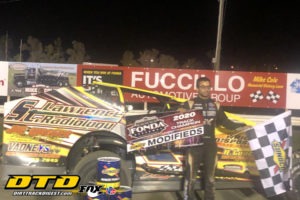 Fonda Speedway crowned its champions on Saturday and Michael Maresca took home the title.  Prior to the event we spoke with him and he said he really wanted to win the feature and take Mimi’s bounty on Stewart Friesen’s head.  Maresca came up just one short for the win but took home the big prize, track title at the Track of Champions.

It was a very special and historic night for the John Kollar No. 10% team and driver Chad Edwards.  It was Johnny Kollar’s first championship in his 53 years at Fonda.  Kollar has been involved in racing for those 53 years, first as a driver and more recently as a car owner and to say that he was thrilled to get his first championship would be an understatement. 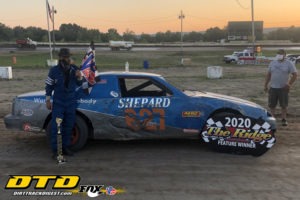 First time wins are always special and locally there were two racers that got to enjoy the feeling of a first time win this past weekend.  Adam Warner of Middleburgh won the MVVDMS Replica Late Model division in his father’s orange No. 44.
Harley Shepard of Esperance raced his No. 627 Street Stock to his first time win in the division at Glen Ridge after seven starts this season.