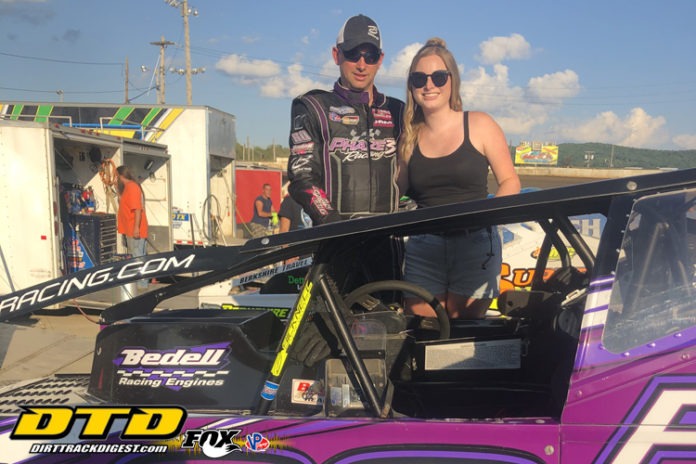 This weekend was our return to two very familiar local racetracks, Albany Saratoga and Lebanon Valley. It was strange being at both these venues without Ed’s brother Rich who we lost in March this year. 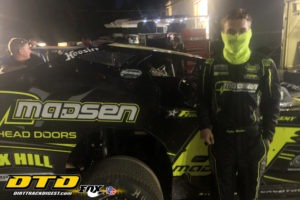 One of the first people we spoke with at Albany Saratoga was Dylan Madsen, driver of the Madsen No. 89 in the Limited Sportsman division. Dylan is the son of Brian Madsen, former driver and sponsor along with his Dad, Guy, of Brett Hearn’s race cars for many years. Fans will be familiar with Dylan’s No. 89 because it is the Madsen house car number driven in the past by many dirt racing stars.

Talking with Dylan he said he had no experience in driving a race car prior to this season when he decided to take on the Limited Sportsman division at the Malta oval. He is currently 20-years-old, quite old in todays standard age for many new comers. In the few weeks that he has been behind the wheel he has shown that he chose the appropriate class to begin in, Limited Sportsman. His steady weekly improvement netted his first victory lane visit on August 7th. Dylan is employed with his Dad at Madsen Overhead Doors. It looks like we may have another Madsen No. 89 at local tracks as a regular for weeks to come. 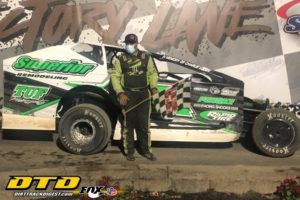 The Modified main event at the Great Race Place found the seventh different driver in victory lane. It was the ninth event of the season at the track and Anthony Perrego of Montgomery, NY beat the best at the track with his newly purchased No. 44 Bicknell chassis. Talking with Anthony after the event he said he is more that happy with the new chassis, he already won a big show at Devil’s Bowl in Vermont and now another win at the Malta oval. Many may not be familiar with Anthony and his racing so we looked at the last five years and he is just shy of 50 wins at eight different tracks. Anthony is a welcome addition to the star-studded field of over 30 Modifieds at Malta on Friday nights.


At Lebanon Valley we met up with many long time friends of both my brother Rich and myself, Mike King who mention that he remembered always talking with Rich after the races every Saturday night and that seemed strange not seeing him there. Denny Soltis also mention the many years he always depended on Rich being there after the races each Saturday and in more recent years seeing him in the pits during the races. These are two veteran racers that Rich really enjoyed spending time with.

We ran into Kim Lavoy just as she was coming off the track and was busy explaining to her father Rick what the car was doing in her hot lap session. Rick has been a part of the sport for many, many years and it was a real joy talking with him and Kim.

As we walked on down the pit lane we spotted and beautifully prepared No. 60 of Brian Berger. With him was his daughter and 50/50 seller, Kassidy posing by standing of the nerf bar of the racecar. Brian says he is putting more laps in this season by running both Lebanon Valley and Albany Saratoga and he feels more confident racing with the many dirt stars at both tracks. 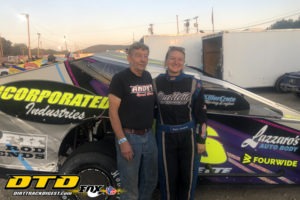 Sportsman driver, Nikki Ouellette was another driver we spoke with. Nikki made her way to victory lane for the first time at Howie’s high banks this season. Nikki is one that has put her all into tackling the famous 5/8 mile oval in New York. Nikki’s dad is always working with her and they do one great job taking on the tough field of Sportsman drivers at The Valley. Saturday was the final night of points at Lebanon and Nikki was sitting third in the points but the night proved to be a tough one in competition. First on lap three of the feature she had a flat tire with the help from another driver, putting her to the back. She made her way back to 10th and was hit again but was able to hang on to finish 14th putting her fifth in the final point standings.

According to an announcement from Oswego Speedway this weekend the 64th annual
Budweiser International Classic 200 super-modified race has been postponed until
2021. It is the first time since the event, normally held on Labor Day Weekend, started in 1957 that this super-mod special has been postponed until the following year.
According to Dick O’Brien former Oswego track manager and current Syracuse Post Standard motorsports columnist, Oswego officials also stated that there would be no racing this season at this lakeside oval due to New York State restrictions on spectators at speedways around the state.

This left us wondering about the status of NAPA Super DIRT Week 49 scheduled to be held at Oswego Speedway October 4-11 so we put in a call to World Racing Group CEO, Brian Carter for an update. At the time of our deadline for this column we had not received a call back. Therefore the only thing we can tell our readers right now is for the latest updates on Super DIRT Week check SuperDIRTWeekonline.com

Albany Saratoga and Glen Ridge are currently the only two dirt tracks still running, without fans, locally. Albany Saratoga, promoter, Lyle Devore is going week to week with his schedule hoping for the no fans restrictions to be lifted. The Glen Ridge schedule indicates they will run their final event on September 13.

With the local tracks wrapping up their seasons in the next few weeks, race fans sit waiting for word on the end of season events usually held in the fall and this year it all depends on whether fans will be allowed in the stands because it’s just not profitable for tracks to run without them.

Word just came this week from Fonda promoter, Brett Deyo that he will promote a three-day weekend the Speed Showcase 200 at Port Royal Speedway in Pennsylvania, Thursday-Saturday, October 15-17.

Until next week send all news and/or comments to biittig@yahoo.com