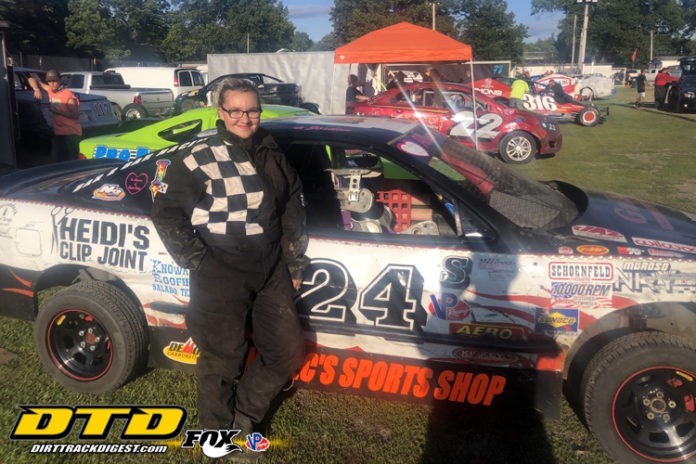 Hard to believe it’s the end of August and it’s only our second time at Albany-Saratoga Speedway.  We watched the beginning of the season from our living room on DTD.TV.  They have done an outstanding job this season with their coverage and Betty is still viewing from home.

Albany-Saratoga is pretty much the only game in the Capital District for racers and the number of cars in the pits on Friday numbered around the 160 mark.  Fans are still not allowed in the stands at New York State tracks so fans follow along anyway they can.

Allana Jordan of Warrensburg is a driver in the Four-Cylinder division at Albany-Saratoga and is currently leading the points in the single cam portion which is not a surprise because last year she was the champion in that class.

We always enjoy talking with Allana and her family, they are so positive and really enjoy the sport and their time at the track.  Allana did share a story with us on her first ever trip to the 5/8 mile high banks of Lebanon Valley.  She said “I started tenth and finished third.  When I was going down the backstretch, it was so long, I thought about having a cheeseburger.”

That’s a new one on us, never heard that before.

David is not new to racing or to the Malta track.  He raced a Legend car on asphalt at the track many years ago. 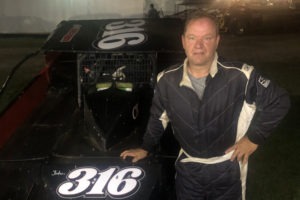 The chassis he is driving is a two year old TEO and he is just hoping for some top ten finishes.  David says it’s a family affair and coming with him each week is his wife, Debbie, his father-in-law, Don.  Normally with him also is his daughter and son.  They just took his son to SUNY Binghamton.  David says he is very happy with how things have gone so far this season and his wife says he is always a winner in her eyes.

As a race fan, when two cars are involved in and incident on the track, some fans see it one way and others see it just the opposite.  On Friday at Malta Stewart Friesen and Peter Britten went into turn four and Britten ended up in the wall.  After the race we spoke with Peter and he said, “I could’ve hit the brakes or stayed on the gas.  I made the wrong choice.”

The story of dedication to a sport is visible in one Buck Gasner of Amsterdam who currently runs his No. 99 Pro Stock racer at Glen Ridge each week.  What’s amazing about Buck’s story is he raced for 22 years without one visit to victory lane until two weeks ago when Buck put his Pro Stock in victory lane for his very first win.  That’s not the end of his story, he came back and repeated the following week and taking his second checker at The Ridge. 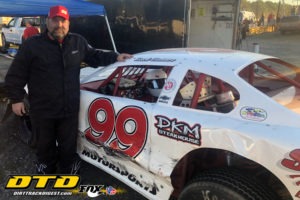 In talking with Buck on Sunday, the thrill of victory was still on his face and the excitement you could still see in how he told his story was ever present.  We’ve seen many first time wins in our time in motorsports and we never tire of watching the happiness from the racers and his entire crew, family and friends.  Buck is driving a new Stone Chassis this season and that seems to be the ticket for him  Buck was instrumental in the founding of the Mohawk Valley Vintage Dirt Modifieds but has since sold his vintage equipment and moved on to race with the Pro Stocks of today.  Seem to have been the right move for someone so devoted to the sport of auto racing.

It’s official, the 49th annual NAPA Super DIRT Week has been postponed until 2021, with tickets and camping automatically carrying over to Oct. 6-10, 2021. Fans may request a refund, but refunded camping sites and seats will be made available to the general public at superdirtweek.com in October. It’s a decision fans have been waiting for and expecting with hope that it wouldn’t happen.

With the announcement came OctoberFAST, six nights of racing at six DIRTcar sanctioned tracks.  The first event kicks off on Tuesday, October 6 at Albany-Saratoga. From there the racing moves west to Utica-Rome Speedway on Wednesday, October 7 then on to a track that has been silent this season due to COVID restrictions, Fulton Speedway on Thursday, October 8.  Friday, October 9 the racing moves north to Can-Am Speedway in LaFargeville.  Saturday, October 10, it’s westward bound to Land of Legends and Sunday, October 11, brings the culmination of OctoberFAST.  There will be no weeklong champion named but there is still $300,000 on the line in purse and prizes.  Fans will have the chance to contribute Special Awards for the week.

Competitors will be at the track, social distancing, and masking up for their safety, and fans will be able to enjoy an unparalleled week of racing from home on DIRTVision.

Needless to say this is disappointing for all of us but we commend DIRTcar for keeping the events in New York State and holding the events on the same dates as that of Super DIRT Week’s original schedule.  Disappointed that there will be no fans but certainly understand the work that was put in to try and accommodate all the COVID-19 restrictions and also understand why those restrictions are needed.  As for the no weeklong champion; mix feeling on that. 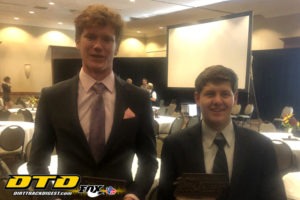 We contacted a couple of the young guns just to see if they would be following the OctoberFAST weeklong events and Demetrios Drellos said yes, he will compete in all the Big Block and 358 Mod events.  Jack Lehner said yes he would follow the circuit as it is set up.  We also reached out to SDW five-time winner, Stewart Friesen and heard from his PR representative, Chad, who he said Stewart would be following some of the events but, to date, he wasn’t sure which ones.