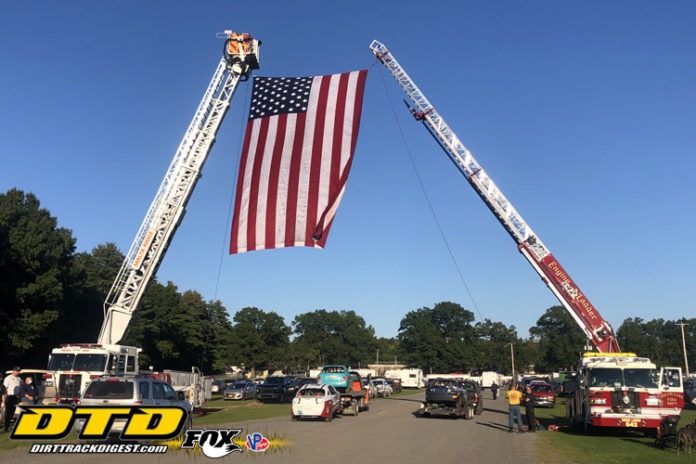 A day to remember, September 11, 19 years ago, the day the world stopped and things changed forever.  We were all brothers and sisters sharing the same sadness and the country came together for the good of all and that is the optimal word……ALL!

On Friday night Albany-Saratoga honored the victims and heroes of that day that gave all with a night titled “Never Forget”.

As part of the evening to remember those that sacrificed on the fateful day, the Malta Ridge and Round Lake Fire Companies brought two big ladder trucks to display the stars and stripes high in the sky.  We spoke with Nicole from Round Lake Fire Company who was taking donations for her fire company and it was great to see the generosity of all the great race people as they stopped to fill her helmet.  Nicole comes by her dedication to serving the community from her dad who was a member of the Duanesburg Fire Department.

We had a personal part in the evening, we awarded $200 to the fastest Modified during the heat events, in memory of Rich Biittig, our brother and brother-in-law that we lost in March 2020 during the time of so much illness.  Rich was a big fan of racing and attended Albany Saratoga every Friday night.  Josh Hohenforst was the fastest Modified in the heats and he was very surprised to learn that.  Watching the Modified heats had special meaning because of the award, Hohenforst was the fastest in the first heat with a time of 15.888; second heat Peter Britten had a time of 15.947; third heat Stewart Friesen had 16.074 and the fourth heat saw Anthony Perrego with a time of 15.94.

One surprise of the night was the return of Brett Hearn behind the wheel of the Madsen No. 20.  Brett has been nearly in retirement since becoming General Manager at OCFS.  Brett holds the record for most wins at the Malta oval with 136.  Unfortunately Brett’s night ended early when the No. 20 broke the rear end before the heats.

The folks from the Mike Mahaney No. 35 still had smiles on their faces this week and we mentioned to them that maybe the No. 35 on the car and 35 years for owner George Huttig to win his first championship at the track might have been good luck.

The Malta oval will be back in action this Friday, September 18 with racing on tap for Modifieds, Sportsman, Limited Sportsman, Pro Stocks, Street Stocks and Slingshots.  Regular start time.  Please check social media and the track website for updates on this event.

With Fonda moving to this Sunday, it left Glen Ridge a clear shot at getting their racing in for the final night of racing on the hill and Snap-On Tool Night to sponsor the night with many tool give-aways, a full card of racing and extra money on the line.  The Man with the Red Chair put up $1,500 to win for the DIRTcar Sportsman to race for, Elmo’s Speed awarded a free tire to the hard charger plus many other bonuses and it was championship night for the Street Stocks, Mini Stocks and Slingshots. Money on the line for the Mini Stock top three finishers in both Single and Dual cam.

We headed to The Ridge in the rain and when we arrived it had stopped and the track crew had a big project getting the track in racing shape.  With the delay we had plenty of time to talk with many of the drivers and crews. 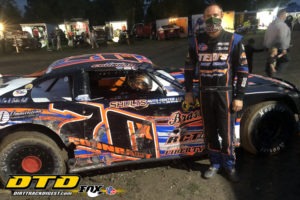 Our first stop, the pit area of Josh Coonradt who was came to Glen Ridge with two wins under his belt for the weekend; one at Malta on Friday and the next at Airborne on Saturday.  He was looking for a clean sweep at Glen Ridge but Beau Ballard spoiled that chance by beating him to the checker.

Many times it’s difficult to get the names of all the crew members on a team but for the Coonradt crew there are only two, Josh and his girlfriend, Heather King.  The two collaborate on setups and its seems to be working.

While walking through the pits we spotted Pro Stock driver, Jay Fitzgerald who said he has put up his car to prepare for the three special DIRTcar events during OctoberFast in October.  We spent time with Jay at SDW last October when brother Rich was with us for what at the time we didn’t know was his final SDW. 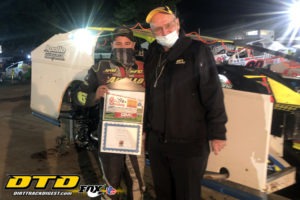 On Sunday Four Cylinder rookie and recent winner at Glen Ridge, Gina Voris gave Ed an 8×10 Post-Time photo composite of her car as a thank you for spending time with her in previous weeks.  Gina is a welcome addition to Glen Ridge and racing in general and we wish her well.

As we close we want to thank Ray Sefrin and Butch Hazzard and the entire Glen Ridge staff for the effort that went into putting on the final show of the season at The Ridge.