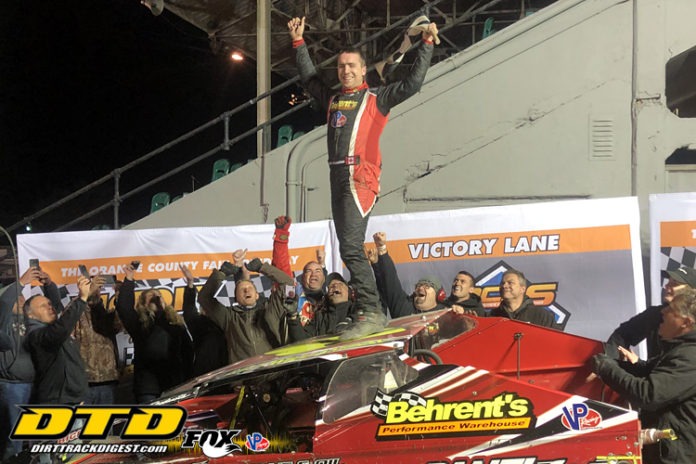 In a year that was a test for all involved we made our last show in person at the historic Orange County Fair Speedway in Middletown this past weekend for the 59th running of the Eastern States 200 Weekend.

A two-day event was set up to close out a most unusual season for first time General Manager, Brett Hearn who is also the most winning driver at the Orange County oval.  We watched the first day of the weekend from home via live stream from the track website.  Most of the qualifying for nearly 200 cars making up four divisions of racing took place on Friday making for plenty of action.  On Saturday all that was left was the Last Chance races for Small and Big Block Modifieds.  Then on to some 350 laps of racing at the 100 year old speedway. 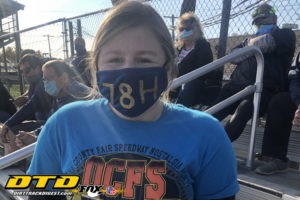 The racing started with a 25-lap Street Stock Championship which is always entertaining to say the least.  There was a limited number of people in the first and fourth turn stands.  While watching we heard a group behind us cheering.  At the end of the event we snapped a photo and talked with Noel Hedes who was wearing a mask with her dad’s number on it. She said she was cheering for several racers on the track because her dad’s car No. 78H was sidelined prior to the start of the event. Noel told us she had also raced in several divisions, Slingshots, Street Stocks and Sportsman but had to give it up do to finances.  So if someone out there is looking to financially help someone in racing, and think a Modified might be to expensive, maybe Noel would be a option.  She certainly has enthusiasm that might transfer into some exciting racing.

While in the stands we ran across Fonda rookie Modified driver, Adam McAuliffe taking in the action of the day.  When asked about his plans for next year he said he would be back behind the wheel of the Laudy Hoyenga Modified.  A change for the team next season is adding a racing night at Albany Saratoga.  We think it’s a good move as most drivers who come off the big ovals seem to learn very much on the smaller Malta oval.  We wish the team the very best and think we are seeing the start of a successful Modified career. 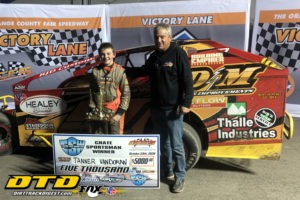 We were able to share in a piece of history at the historic oval this weekend.  The 2020 Sportsman track champion. Tanner VanDoren of Walnutport, PA., wrote his name in the history books on several counts; in his first full year of racing at the track at age 12, the very young driver, claimed the track title, without a win and then on Saturday became the youngest driver to win a feature at the track breaking the record set by Brett Hearn at age 18.  In speaking with young Tyler, we found a young man wise beyond he years, well spoken and he showed great patience in his drive to victory. 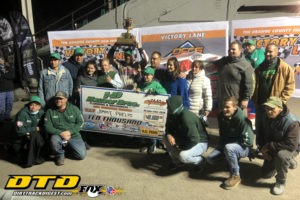 The 358 Modified portion of the weekend was 75-laps on the hard clay and ended with a familiar face in victory lane.  Jimmy Phelps of Baldwinsville, NY who is 45 years old and we believe he started racing later than Tanner.  Capital District track regular, Rocky Warner of Johnstown finished third giving him the best local finish in the 358 Mod feature.  While in victory lane on what is normally the fan side of OCFS we were able to speak with Jimmy Hauser of Hauser Brothers Plumbing and Mechanical who was sponsoring the 358 Mod event.  Hauser Brothers was a big part of our sport just over 20 years ago; one of the most beautiful cars at Orange County was the HB2 driven by Jimmy Hauser.  Jimmy had one Sportsman win at the track and nine 358 Mod wins.  But many will remember Jimmy’s run at Super Dirt Week in 1995.  His week was one for the record books, winning Best Appearing Car and Crew from Gater Racing News, 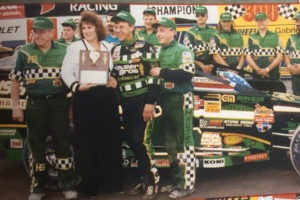 started tenth in the 125 lap Small Block event and led some 55 laps and took home the win and nearly $24,000.  We were glad to see Jimmy back home at OCFS and it was great to share stories of the past with him.

The finale for the day was the Eastern States 200 for Modifieds.  Again with big money on the line it was 30 year old Canadian Mat Williamson who took home the big money, $25,000.  Stewart Friesen finished second, and Albany Saratoga track champion, Mike Mahaney third.

Coming up this weekend, on Saturday, October 31, Glen Ridge will host the postponed, Halloween Havoc, a racing Enduro and Demo Derby.  Action begins at 1 p.m.  Then on Sunday, November 1, the annual Lebanon Valley Swap Meet takes place at the speedway from 8 a.m. to 4 p.m.

The Short Track Super Series promoter, Brett Deyo announced on Sunday the plans for the series to run at Bubba Raceway Park in 2021 in Ocala, FL.  The STSS will take place alongside the Lucas Oil Late Model Dirt Series, USAC Midgets and USAC Sprint cars. The “Sunshine Swing” kicks off Tuesday, January 26 with practice and ends Saturday night, January 30, with the finale.  The entire event will be streamed live on Dirt Track Digest TV.