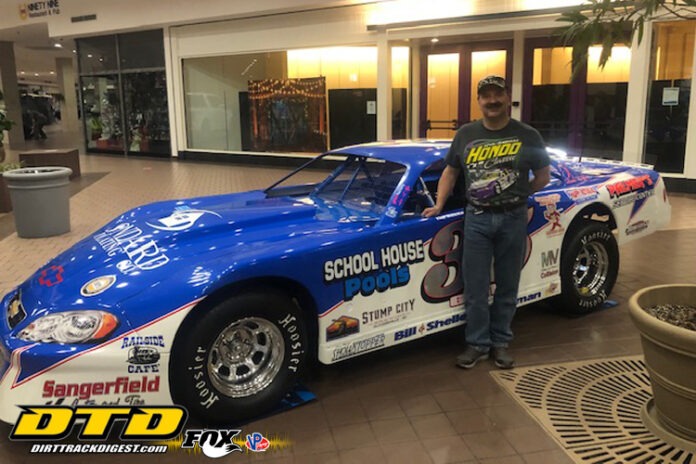 We welcomed back the Fonda Speedway Racecar Show this past weekend at the Via Port in Rotterdam.  Ed made it to usher the cars in on Thursday evening and this year with the restrictions for COVID-19 the cars were limited but it was still exciting to see our season getting that much closer to beginning.

One driver that has already starting racing this season is, Fonda 2020 Modified Champion, Michael Maresca, who raced in the Kingdom of Speed Weekend show at Bridgeport Motorsports Park in New Jersey this past weekend and took the win over Mike Mahaney in the 60-lap Doug Hoffman Memorial.

We did speak with several racers at the mall during the weekend and because there were so many we decided to hold some of the stories till next week to give them equal coverage and be fair to all concerned. 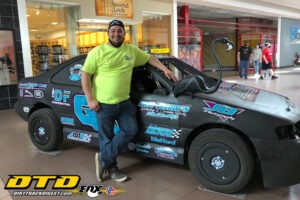 Jim Bleau will be racing his No. 43 Four Cylinder at Fonda this season, a car he co-owns with John Napoli, the 2020 Fonda Four Cylinder (dual cam) Champion.

Jim has been racing since age 15 and really enjoys racing in the four cylinder division.  Jim would love to be able to race with the SCDRA (Sport Compact Dirt Racing Association) an organization that races Four Cylinder cars over several states and pays the division big money at several special events throughout the season.

When talking with Jim we could tell he really enjoys racing and wants to make it fun for his fans.  If you get to his pit area make sure you get to see his “Flamingo Zoombies” George and Frank.

Racers put much thought into colors on their cars and Jim has a story to tell about the colors on his predominately black race car with teal and purple lettering.  The purple represents suicide awareness; he lost a friend to suicide and the teal represents ovarian cancer awareness, that took his mother. So when you see Jim Bleau’s four cylinder racer on the track remember that it’s more than just racing.

Carter Gibbons is new to racing cars, he will start his second full time season at Fonda this year.  However, he has been racing since he was 15, in Motocross.  Carter was at the mall and sat talking to fans and potential new fans as he gave out free photos, making sure they knew where and when they could see him race.  Carter may be new to racing but he sure isn’t new to promoting himself and the sport he loves.

Carter relayed to us just how he was bitten by the racing bug.  He went with his brother, Brendon to Utica-Rome in 2019 where his brother raced a Limited Sportsman.  Carter was supposed to try racing another car that day but that got dashed early and his brother offered him a chance in his car.  Carter said, “I started in the back and worked my way up to third and thought, wow this is great, when all of a sudden the first place car hit one of the tractor tires and slid up and hit the second place car knocking both cars out of position.  I took the checker and “boom” I was bitten by the bug.” 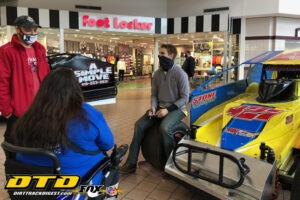 The number on Carter’s car is 427 and that is quite another story.  We all know racers are superstitious and Carter is no exception.  When he played baseball his uniform number was 13, but he knew it was an unlucky number for a race car so Carter said, “I decided on a number that added up to 13.”

Kenny Gates has been racing since 1993 and experienced his first car show in 1996.   Since then he has never missed a show and except for the years he was track champion, Kenny’s No. 35 Pro Stock has set in the same spot at the show each year.

Kenny will race at Fonda this season and also a few Friday nights at Utica Rome, when the six race series between the two tracks goes to the Vernon oval.

It’s easy to spot Kenny’s car each season, always blue and white and always the No. 35.  Why the No. 35?  It’s his brother Steve’s football number and Kenny says, “He was a great athlete and when I was deciding on a number I decided to honor him.  He’s always been a big help with the car and a great supporter in all aspects.” 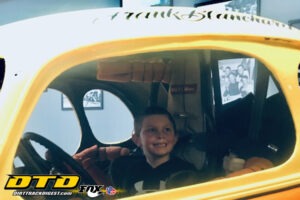 Kenny says his first win in 1997 was special, not just because it was his first but because the car was completely home built by him, his father and brother.

The MVVDM club is growing in popularity and the “Vintage Alley” at the car show proved to be one of the popular destinations for fans roaming the mall corridors.  Frank Blanchard travels many miles with his vintage racer and is always ready to give a kid a chance to sit in his car.  At the mall Garret Ferjamec of Ephratah was just one of the lucky ones while we were there. 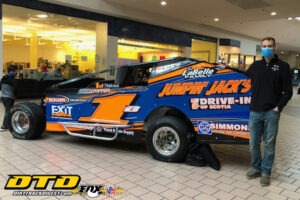 Fonda Limited Sportsman 2020 Champion, Brett Mortensen was at the mall on Sunday and says he is moving up to 602 Crate Sportsman this season.

Mortensen began his racing career in go-carts at Dodge City Speedway where he was Track Champion in 1999 and Junior Light Track Champion in 1997.  From there he moved on to ice racing with Adirondack Motor Enthusiast Club (AMEC) in the Street Legal division.  He was successful there also, third in points in 2016, 2017, and 2018 and second in points in 2019.  He was crew chief on his brother, Mark’s crew for many years until he decided he wanted part of the action as a driver and bought a car to race in the Limited Sportsman division.  He continued as a successful chauffeur and was third in points in 2019 and in 2020 won the Limited Sportsman Track Championship.  Brett will now be racing alongside his brother Mark,  another Fonda champion.

This past weekend, NASCAR ran the Cup cars on dirt for the first time since 1970 and as she does so many times, Mother Nature had a say in when they would run, a day late.  Yes, heavy rain in the area of the Bristol Motor Speedway in Tennessee forced official to postpone both the NASCAR Truck Series and Cup series events until Monday.

Qualifying for the trucks was totally cancelled wiping out any chance that Jessica Friesen of Sprakers had to show her stuff on the dirt with a truck.  This gave us cause to get on the soapbox and comment on why, with the lineup set by owner points and only three trucks (Jessica being one of them) not qualified, that NASCAR didn’t add the three to the race……three trucks?  What were you thinking?  Especially after they did a special promotion all week, including interviews with the Friesen’s regarding their attempt to become the first married couple, since Elton Sawyer and Patty Moise in the 1990s, to compete against each other in a NASCAR national series.