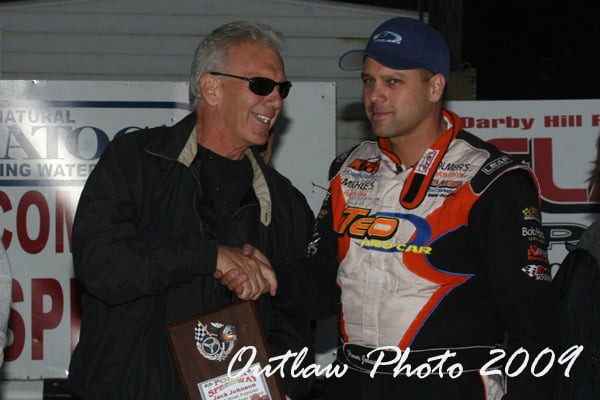 The dirt track racing world suffered two losses this past week with the passing of Jack Johnson and Clem DeBiere on Thursday, April 1.

Legendary driver, “Jumpin” Jack Johnson of Duanesburg lost his long battle with ALS at the age of 76. 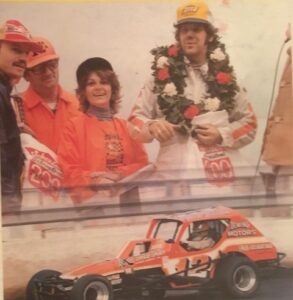 In a career that spanned 43 years, Johnson won 428 times at 35 different tracks in 10 states and two Canadian provinces.  He held the record of most wins at Fonda Speedway with 149 and was 11-time track champion at the track he called home for most his career.  He was a fan favorite at Fonda and made the No. 12A, orange Modified an icon at the “Track of Champions” and wherever he competed at tracks along the East coast from Canada to Florida. On Saturday nights at Fonda during the height of his career the stands were a sea of orange shirts and jackets with fans proclaiming their loyalty to the handsome, quiet, polite, always willing to help, fan friendly driver with the toothpick sitting at the side of his mouth.

One of his greatest achievements was being the first New Yorker to win the Super Dirt Week main event at the New York State fairgrounds in 1979 in a car owned by Bob Deming of Cobleskill.  Johnson backed up the win by winning the event a second time in 1984.

During the 1980s, Jack picked up six Mr. DIRT Modified series titles, in addition to Winter Tour point championships in both Florida and Texas.

When information came out this week noting the arrangements it said, “Funeral arrangements for Jack will be private at the convenience of the family.”  Knowing Jack, we were not surprised, that was who he was and we’re glad that the family followed what Jack would have wanted. 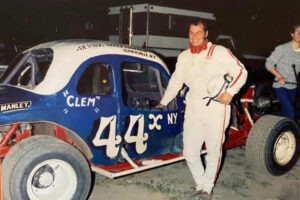 Fonda Hall of Fame member, Clem DeBiere, passed away this past week at the age of 80.  DeBiere began his career in racing as a driver and went on to serve local racing in many capacities, as a flagger, announcer, track maintenance and racing talk show host.  He and his son, Pat also entertained the fans at Fonda for several years as the clowns, MeToo and YouToo.  Clem served on the board of the New York State Stock Car Association and worked many fundraisers for the organization.  He was highly visible at many tracks in the area and always had an opinion or comment to share.

This Saturday, April 10, the gates will open at 1:00 pm for open practice at Fonda Speedway kicking off the 2021 season.

Sunoco Race Fuel will be available and Andy’s Speed will be on hand with American Racer Tires and parts.

Concession stands will be open.  Grandstand gates will be unlocked for socially distanced viewing.

We promised to highlight the remaining racers we spoke with at the Fonda Car Show this week so here they are: 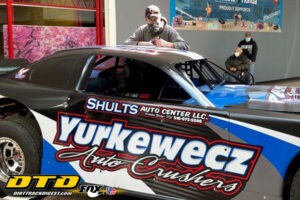 Andy Graves was busy signing photos at his car when we caught up with him. Graves  has plans for two Pro Stock cars this season, one for Fonda and the Super DIRTcar Series and one for Glen Ridge. Both cars will be sponsored by the same group of dedicated contributors, Yurkewecz Auto Crushers, Palmer’s Service Center, Shults Auto Center, LLC., Andy’s Auto and Alignment, JK Motorsports Signs and Graphics.

A special treat for Andy this season is that his father, Terry, a former racer, will be part of the team as the driver in the six race Pro Stock series between Fonda and Utica-Rome.  Terry Graves last raced in 2005 in a Pro Stock and Andy just wants to give his father the chance to have some fun. 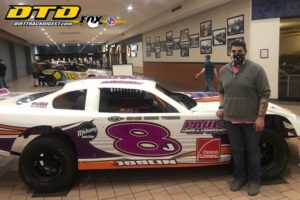 Ivan Joslin will drive one of the Todd Hoffman owned Pro Stock No. 8J this season and also have his own No 49 available for miscellaneous shows.  He plans to run Fonda and Glen Ridge with an occasional trip to Utica Rome.  Ivan will be a teammate of Nick Stone who will also drive a Todd Hoffman Pro Stock this season, the No. 8N primarily at Fonda. 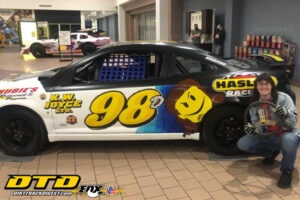 his hand at Utica Rome because he’s never been at the track to race and feels it will be quite a challenge.

John Roese will be racing with the Vintage cars once again this season. Roese had a successful season with the MVVDM last season and says he really enjoys his time racing and traveling with the group.

Wayne Russell, Jr., drives the No. 54D and his paint scheme honors the late Adam Petty.  When Wayne comes to the track he comes to compete for the checkered flag and is always prepared.  He says he doesn’t race junk and always makes sure he is using new parts to give him the best opportunity to win.

In addition to his Four Cylinder, Wayne is working on a Street Stock but says he won’t bring it out until he is sure things are right. 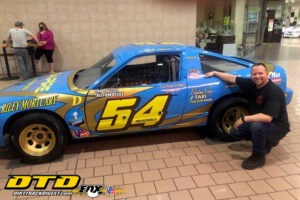 “Right now there are plenty of used parts,” says Wayne, so he is holding off until he is satisfied.  We applaud him for his efforts and hope everyone thinks of the money and work involved in getting to the track each week and being competitive.

For whatever reason as we went down the list of cars at the show, we noticed one surprising thing, there was only one Modified, the No. 27A of Steve Akers, painted to honor a former Fonda Champion, Harry Peek. 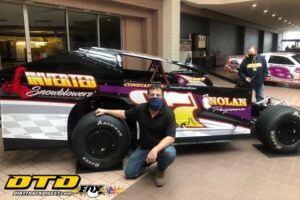 Steve has been racing for many years and knows how important the history of our sport is and proof is the rear deck of Steve’s Modified where five of the best at the Track of Champions and the best of our sport are on display; Jack Johnson, Lou Lazzaro, Dave Lape, C. D. Coville and Harry Peek.  Being a Harry Peek fan, Steve is looking forward to August 7th,  Harry Peek Tribute Night at Fonda.