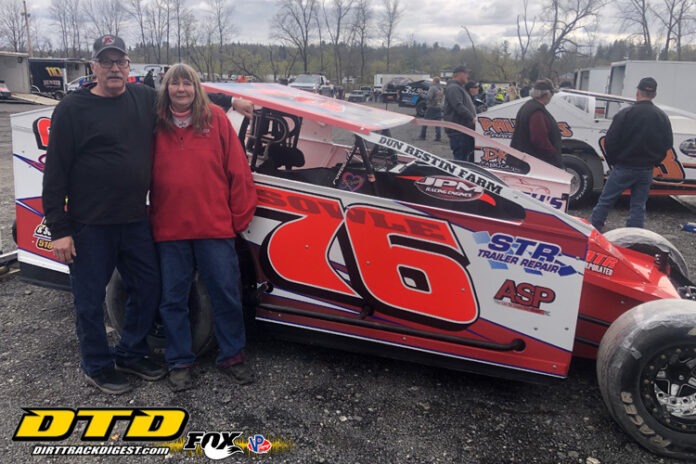 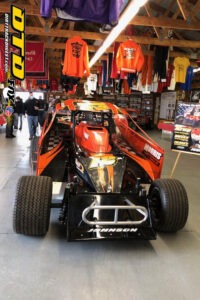 Fonda Speedway opened its gates for the 2021 season on Saturday and we made our way early to take in the beautiful display in the Fonda Museum honoring Jack Johnson.   The entire night honored Jumpin Jack as teams and fans came dressed in orange Jack Johnson apparel to show their love and support to the Johnson family in attendance.

The Museum team consisting of Randy and Travis Colegrove, Jessica and Peter Schwab, Shawn Chiuminato and Chuck Congdon worked tirelessly the past weeks cleaning and putting things together for the “Jumpin” Jack memorial tribute displayed for the many that made the trip for the opening of the doors for 2021.

We commend them for their efforts and time spent working on all the displays for Saturday’s opening. 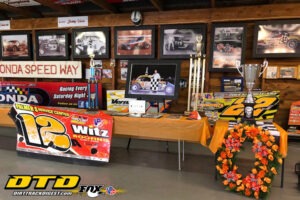 Noticeably absent from the Museum on Saturday were Dave and Jackie Lape who many know have spent the past few years working to obtain and put together all the displays in the Fonda Speedway Museum.  We learned that Dave is currently dealing with some health issues and of course Jackie was home taking care of him.  We hope to see them sometime soon at the museum.

It was Palmer Service Night and Alton and Carole were celebrating their 45th Anniversary at the place where it all began with a beer on a Saturday night in 1975.  They were married in 1976 and Alton began racing the same year, in a Late Model the couple purchased from Bob Vedder.  That ride did not fit their racing expectations so they next bought an Alberti chassis, open wheel car from Tommy Livingston and as they say, the rest is history.

The Palmer history at Fonda includes many wins in the Sportsman division for Alton, he sits on the top of the all time win list with 56.  And they have always been willing to help other teams and sponsored many since Alton hung up his helmet a few years back.  Alton and Carole Palmer were inducted into the Fonda Speedway Hall of Fame in 2015, a fitting honor for a couple that is as part of Fonda’s history as the famous covered grandstand and the nickname the “Track of Champions” 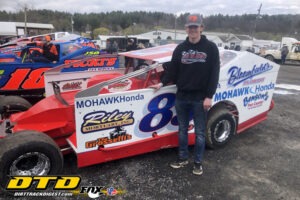 Jack Lehner is behind the wheel of the Nelson No. 85 at Fonda this season.  Saturday Jack showed just how all his racing with the Super DIRTcar stars on the Super DIRTcar Series has given him the experience to adjust to track conditions and driving with other drivers at different tracks.  He finished seventh in the main event from a 12th place starting position. 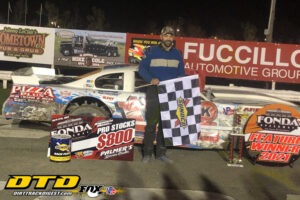 Beau Ballard recorded his first win in the Pro Stock division.  Not a stranger to Fonda Ballard the son of Danny Ballard has three wins in IMCA at Fonda.  He said in victory lane that he destroyed a car in warm-up the week before and brought out his old car for Saturday, so he was very happy and surprised to be in victory lane.

This Saturday, April 24 the 40-lap $12,000 to win Montgomery County Open will highlight the racing program sponsored by Andy’s Speed Shop. All other regular divisions will also be in action along with the Mohawk Valley Vintage Dirt Modified Series (MVVDMS). Gates open at 3:30 with hot laps at 5:30 and racing at 6:30.

For those that love the vintage this week at Fonda the group will be honoring the 2020 champions of the MVVDM with a celebration at the Fonda Museum at 1:00 pm.

As a fundraiser the MVVDM has raffle tickets for a chance to win the hand painted (by Custom Bob) Legends Rocking Chair featuring Steve Dannish, Bill Wimble, and Pete Corey.  Tickets are $5.00. 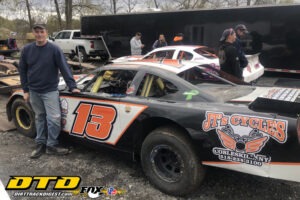 Cliff Haslun debuted his No. 13 Pro Stock on Saturday and wound up flipping on the first lap of the first heat of the day and wound up on his roof on the front stretch.  An unfortunate start to the 2021 season for Haslun. His son Danny was luckier, he made the Fonda Fair Cruiser featured and finished 15th.

Terry Graves was out in the second car he and his son Andy prepared over the winter Its been 15 years since Terry was behind the wheel,  he said he hoped to just stay out of the way during his qualifying heat.  He did even better, he made the feature. 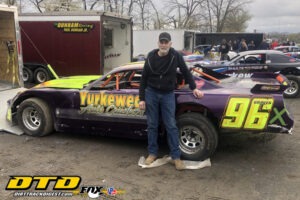 Ed made the trip to Albany Saratoga on Sunday for the rescheduled opener from Friday night.  With no fans in the stands he was not expecting to find a parking lot filled with cars with a section being used for pit overflow.  The pit was over flowing because there were 200 cars signed in to take a shot at the Great Race Place for the first time in 2021.  Honoring Jack Johnson all qualifying heats at the track in 2021 will be 12 laps.  Also on Sunday the Vintage No. 12A paced with the field from the 12th starting spot.

The Super DIRTcar Series big blocks make their way to Bristol Motor Speedway in Tennessee this weekend for the Bristol Throw Down starting Thursday, April 22 through Saturday, April 24.  The event pays $10,000 for a 40-lap feature.  If you can’t be there you can watch in on DIRTvision.