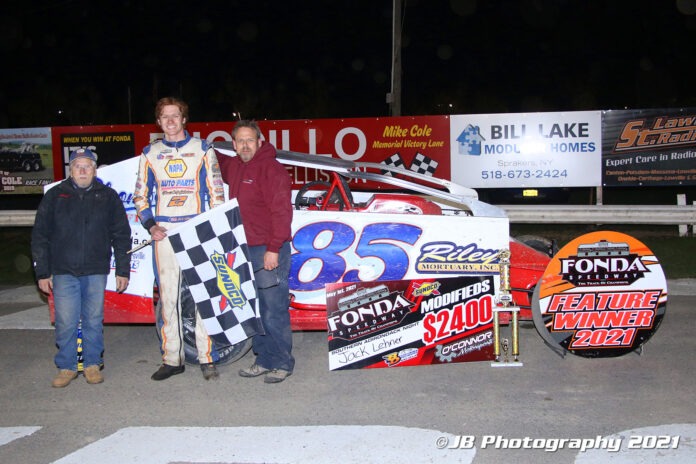 A first time win is always special and Saturday, Jack Lehner of Saratoga Springs recorded his first career Modified win at the Track of Champions.  Lehner was driving the Nelson Motorsports/Bloomfield Florist sponsored No. 85 owned by Bill and Erik Nelson, a team that has been part of Fonda history for many years. 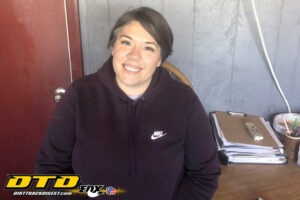 Former Miss Fonda Fair in 2006, Amanda Valentine of Gloversville sang a beautiful rendition of the National Anthem to begin the nights activities. During intermission, giveaways by Todd Cipperly of Farmers Insurance were tossed out to the fans by Race Director Denny Tilison and Ed Biittig, Sr. 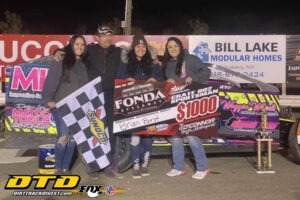 We told you of the problems of Brian Borst last week and the damage to the water pump and radiator on his No. 69 Sportsman, and this week we can tell you he took the same car with an older motor to victory lane.  Brian said that the damage the week before did also do damage to the motor and they put in the motor they had in the car when he won in 2018. Whatever they did, it all came together and he said the car ran and handled great the whole night. It was Borst’s second win in the division since he return to racing after a 15 year hiatus.  He also has 15 wins in the former Open Sportsman division at the track. 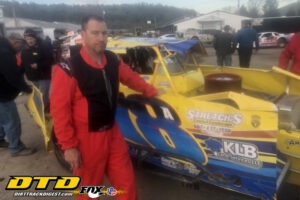 Over his career, 602 Crate driver, Brad Alger has taken some bad rides at Five Mile Point, Utica-Rome and Fonda but Saturday’s flip and crash was one of the worst according to him.  He’s only raced a few times in the last few years and the good thing was his Bicknell chassis kept him safe, it did what it was designed to do.  Brad was happy to be okay but his car was badly damaged and said he wishes drivers would slow down a little quicker when an incident happens.  Brad’s racing career began in go-karts at the age of 12.  Next he moved to Four Cylinders for a couple years, then a Slingshot for a year before moving to Sportsman in 2003 racing at Utica-Rome where he recorded 10 wins in the division.  He was Utica-Rome and ROC champion in 2008.  He then went Modified racing until the final year at Syracuse when he purchased a Crate and gave The Mile a shot.  Since then he has raced a few races each year. 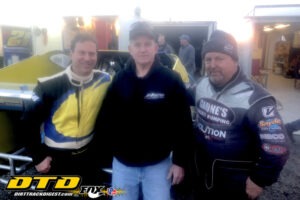 We spotted a trio of guys that have logged many miles on the Fonda oval; Dan Santabarbara, Pep Corradi and Jeff Trombley.

Dan said he was at Fonda in the grandstand at age four later helped on many race teams before deciding to try it behind the wheel himself.  Dan says, “There’s nothing like winning at Fonda.”  He has one win at Fonda in the 602 Sportsman on July 7, 2018.

Pep Corradi was a long time crew member of Jeff Trombley before sitting behind the wheel.  Pep’s most memorable win was the night he won, on May 28, 2016, after the death of his brother Joe in January of that year.  He says he still enjoys it but is getting older and it’s getting more difficult to get a crew together to work on the car.

Jeff Trombley has his own record at the Track of Champions but on this night was helping some of his long time friends.  Trombley has 35 Modified wins at Fonda and two Modified championships in 2001 and 2002.   These days Jeff spends his time driving a sprint car occasionally for Warren Alexson.

Glen Ridge was scheduled to open on Sunday but due to all the rain in the area on Sunday they moved their opening night action to this Sunday, May 9.  There will be dollar hotdogs thanks to the “Man in the Red Chair”.

Rain cancelled the rescheduled practice at Utica Rome on Sunday making the next shot for drivers to get practice at the Vernon oval Tuesday, May 4 and we know what happened on Tuesday, more rain and another cancellation.  The Grand Re-opening night is still scheduled for Friday, May 7, all divisions plus Slingshots.

This weekend at Fonda May 8 is the first race in the Thunder on the Thruway Series between Fonda Speedway and Utica Rome Speedway. The Modifieds will race for a $4,000 to win, the Crate 602 Sportsman for $1,500 to win and the Pro Stocks $1,000 to win. There will be a separate point fund paid out at the end of the six-race series of three races at each track.

We close this as we sit here watching the Super DIRTcar Series event at Bridgeport on DIRTVision.  The availability of dirt track racing on all the streaming channels has opened up a world of racing to many folks who are unable or do not wish to travel.  Thanks to all those that make it all possible.

Until next week please send any news and/or comments to biittig@yahoo.com