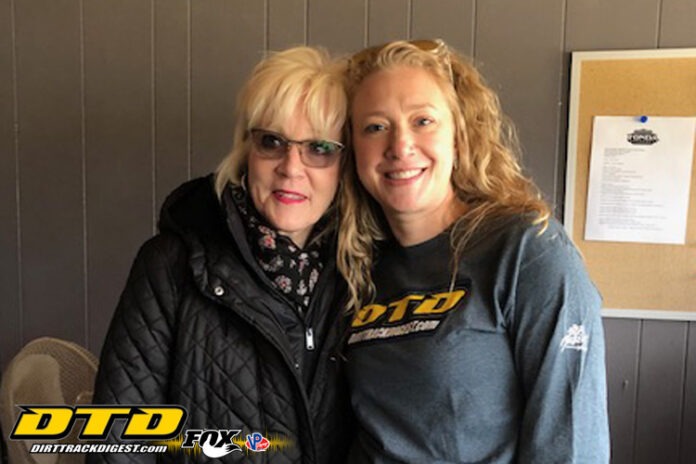 With this past Sunday being Mother’s Day we thought we would highlight a few of racing’s mothers that are the heart and sole of the race teams and in the pits with their children or supporting them from the stands a fans each and every week. 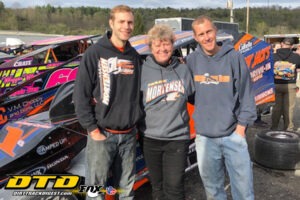 First we talked with Bonnie Mortensen, whose sons Mark and Brett are both racing in the 602 Sportsman division at Fonda this season.  Both of Bonnie’s boys are successful racers with records to prove it and she is one proud mama.  Bonnie says she has missed three races since Mark began racing in 2003.  She has followed him since his go-kart days and to no surprise, Bonnie even has a couple go-kart wins under her belt.  So don’t mess with Bonnie’s boys or you will hear from her.  Bonnie also serves as the NYSSCA rep at Fonda and serves on the Board of Directors of the organization. 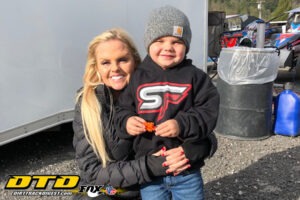 Jessica Zemken Friesen is Fonda’s fastest Mom and on Saturday she was busy in the pits getting ready to race her 1Z Modified while taking care of her son, Parker, which involves chasing and trying to keep up with him.  Parker has become famous for his roof dances and his group of buddies that celebrate with him in victory lane when dad wins.  Jessica has a successful career in open wheel racing, one that began when she was eight years old at Dodge City go-kart track in Howes Cave.  She is a favorite with fans whenever she races at Fonda and many are hoping to be on hand the night she beats her husband, Stewart. 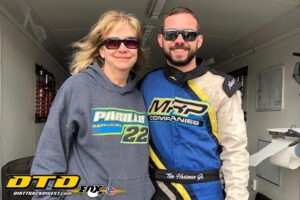 Carol Hartman, mother of Tim, Jr., says she also has missed very few of her son’s races since go-karts to his current day successes in the Sportsman division.  Tim, Sr., was a racer when she met him and Carol says she had never even seen a race until then.  When Tim, Sr., stepped aside for Tim,Jr., to take over as the Sportsman chauffeur at age 16 it’s been a family affair for the Hartman’s and Tim’s career has shown the dedication they are willing to make in the many wins and titles he has.

Mimi Lazzaro’s mom, Shelia Dornburg came to Fonda with her father from her home in Palatine Bridge and her life has been connected to racing ever since.  She also went to Victoria Speedway as a young fan and has many memories of racing in those days.   She currently sits in the covered grandstand each week to support her daughter in her announcing career at the Track of Champions and on DTD.TV. 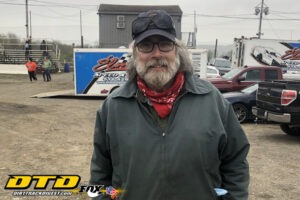 Ed Docskalik of Richmondville races with the Mohawk Valley Vintage Dirt Modified Series and whenever the series is at Fonda, Docskalik feels right at home.  He runs in the Antique division in a former Wink Hinkley No. 27 Ford Late Model with mostly original parts.  Ed was one of the original “Grand Gorge Gang” members that raced at the track during the Compani era and he also worked at the track and provided packer cars to run the track in on race nights.

On Saturday night Ed finished fifth in the Antique division of the MVVDM Series and the announcers were stumbling over the pronunciation of his name.  When we spoke with him at Glen Ridge on Sunday before the rains came, he said, “It’s three syllables, Doc-ska-lik.  If anyone has trouble with the pronunciation all they need to do is ask.”

That sounds easy enough, however, if the person whose name you’re trying pronounce is not standing in front of you, it’s not that simple.  Imagine you are the announcer and you’re handed a sheet with line-ups containing driver names that you may not be familiar with, that puts a whole different outlook on it.  That’s what happened on Saturday to the Fonda announcers and therefore they had to do the best they could in trying to pronounce all the names on the MVVDMS line up lists.  So let’s not be too hard on them.

We personally think both Chris Moore and Mimi Lazzaro are doing a fine job as the announcing team this season.  Chris is new to Fonda and we can attest that he does go through the pit area prior to the event, just like the old school announcers did back in the day.  We know Fonda fans can be tough on announcers because everyone has their preference and opinion, but we as senior fans and part of the Fonda Faithful have learned over the years, we all start somewhere. 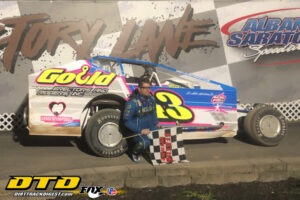 Within the past week the name, Keith Flach has surfaced many times in conversations and on social media.  Flach has been a fixture at Lebanon Valley and this season had some issues at the Valley and decided to take his racing on the road.  So far, he has ventured to Bristol Motor Speedway in Tennessee and Bridgeport Speedway in New Jersey.  Keith said he liked Bridgeport even though he didn’t qualify.  Saturday, May 1, he raced at Orange County Fair Speedway for the 12-race Modified series. This past Saturday he raced at Fonda.

We spoke with Keith prior to the main event at Albany-Saratoga on Friday and learned during the off season he had the Covid-19 virus and lived in his camper for two weeks to keep his family from contacting it.

Later in the evening we saw Keith run and outstanding race to win the feature over Anthony Perrego and Larry Wight.  It was Keith’s night to shine. Keith is a third generation driver.  His grandfather, John was Lebanon Valley champion in 1962.   Keith’s father, John was Lebanon Valley champion in 1988 and 1989 and currently drives a Modified with the MVVDMS.  Note: Grandfather, John went home to the Lord on July 27, 2020.  With all that went on last year some may have missed it. 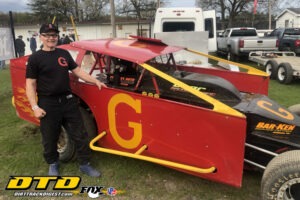 Not only a true competitor, Reggie Bonner shows his sportsmanship in many ways.  Last season when Jackie Brown’s Modified was not able to race for the feature, Reggie let him borrow his Red G.  This year when it looked like Reggie would not be able to race due to finances, Jackie’s wife, Jennie repaid Reggie in a big way.  She started a Go Fund Me page to keep him going for the 2021 season.  So far it has collected $922 and after breaking the rear end on Friday during the consi, he will need it.  At the end of this season Reggie is looking at selling his Red G because being in the tree service business for 50 years has taken a toll on his back.  Racing needs competitors like Reggie that stand among the professionals and semi-professional and are there just to have a good time.

We look forward to this weeks racing and until next week please send all news and/or comments to biittig@yahoo.com