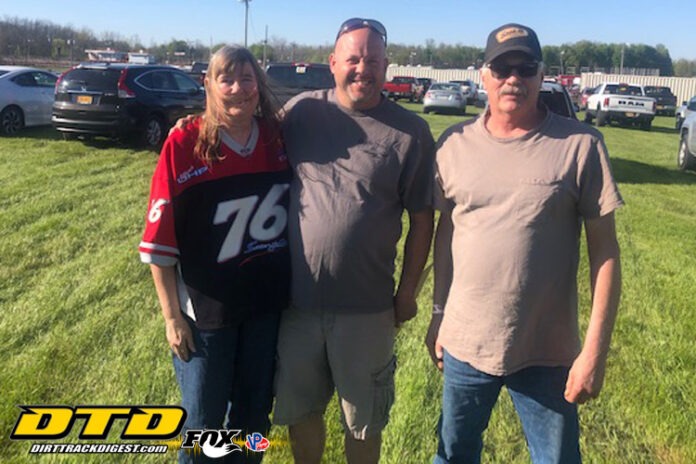 It was one beautiful weekend and we took advantage of it.  It has been sometime since we could attend races all three nights of the weekend.

With the sun shining on Friday it was easy to decide to make the trip out to the grand re-opening of the Utica-Rome Speedway in Vernon, NY.  Now under the promotion of BD Motorsports Media, Inc., Brett and Heather Deyo, Friday’s event was the first when Heather Deyo stepped into her husband’s shoes to run the show while he was promoting another event in Georgetown, Del., some six hours away. 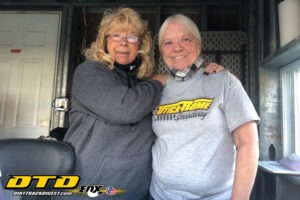 On entering the speedway it was hard to tell if we were there for a race or a racing family reunion.  There were so many familiar faces standing with Barb Clark at the ticket window, including Brenda Belden.

Before we even entered the pit area we ran into Shane Andrews with Alton and Carole Palmer doing an interview for the upcoming Dave Lape Tribute night at Fonda as part of the museum presentation.  Shane was unable to stay for the racing but said that Utica-Rome was his home track as a kid and he has a lot of memories from the track. 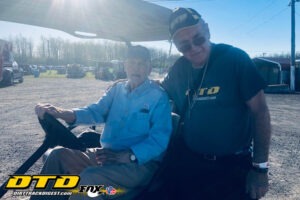 As we entered the pit area one of the first familiar sights we saw was owner and former promoter/operator, Gene Cole riding on his golf cart with a big smile on his face.  Under Gene’s watchful eye, Utica-Rome Speedway became a showplace in Central New York racing.

As the parking lot and grandstands starting filling up, the driver’s meeting showed attendance of some of the best in our sport, each one looking to take home the honor of winning the first show under the BD Motorsports banner.  At the end of the night those drivers with that honor were Stewart Friesen, Modifieds; Matt Janczuk, 602 Sportsman; Nick Stone, Pro Stocks; Clayton Dumond, Limited Sportsman; Justin Pope, Four Cylinder Cruisers. 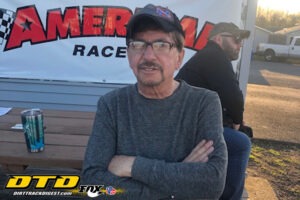 One veteran racer that made the trip to Utica-Rome on Friday was John Kollar.  When he looked at my list of all-time winners at the track he said, “There I am, I was here 51 years ago.”

Fans that have been to Fonda and Afton know when they see Denise Page at the concession stand they can expect great food and of course there she was and the food was great.

With the weekend moving quickly our next stop was Fonda Speedway on Saturday and our first stop there was the Fonda Speedway Hall of Fame and Museum to speak with Jessica Lape-Schwab and her husband, Peter who busy putting together a special night for her dad, Dave. 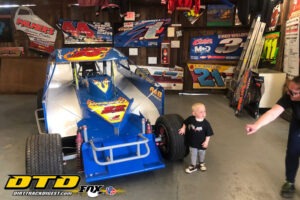 May 29 at Fonda Speedway is Dave Lape Tribute Night, a night to honor one of the icons of the Track of Champions.  The Fonda Speedway Museum will also be having a special walk down memory lane beginning at 3:00 pm, complete with music provided by Diamond Entertainment D.J. Service. Dave Lape is expected to be in attendance.  The night of racing is sponsored by M. W. Roosevelt & Son Towing and Recovery, a long time sponsor on the Lape No. 22.  The Modifieds will run twin 22-lap events plus all other divisions will be in competition.

While in the museum we spotted a two-year-old young man getting his first look at race cars and it was also his first ever visit to Fonda Speedway.  Wrenley lives just down the road from Stewart Friesen in Sprakers and his parents brought him to see what it was all about. 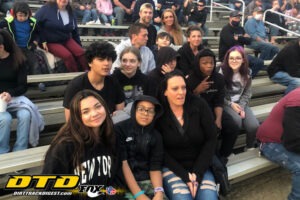 There were many new fans in the parking lot and headed to the ticket gate for dollar night.  As we approached Gate 2 we saw a large group taking advantage of dollar night, 13 people from Johnstown and Gloversville; some that had never been to Fonda and some that hadn’t been to the track in a very long time.  They were relatives of the late Skip Pabis and they hadn’t been to Fonda since we lost Skip on May 27, 2005.

We often hear fans saying that we have to figure a way to get new fans in the stands, well Brett Deyo is not just talking about it, he’s doing it. 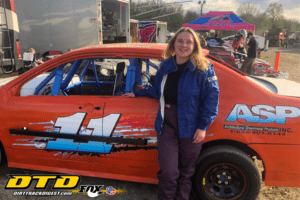 Ariana Schultz of Pattersonville is an 18-year-old high school student who attends Schalmont Central School in her senior year. Ariana is a true rookie in racing, she had never been in a race vehicle of any type (not even a go-kart) until Sunday night at Glen Ridge.  She took on the Four Cylinder division and when the feature was posted, Ariana was on the pole.  A few of us, old timers, who have been around racing for more years than she’s been alive, spoke with her about our concerns of starting on the front row for her very first race and she took it all to heart.  When the feature came to the track she chose to start in the rear.  She got 12 laps of track time and narrowly missed her first track incident.  Her decision showed us that she is mature enough to know a lesson when she sees one.  And we were happy she took the advice of a few old timers.